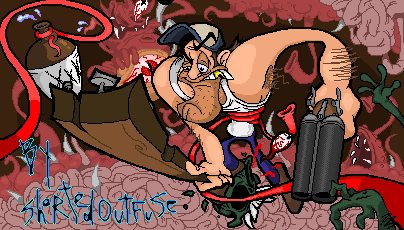 Any feedback is appreciated!


Story: Local hillbilly, Eddie, had his worst nightmare realized when the Schism Corporation built a research base in the cave system beneath his house. Things then went from bad to worse when that base was overrun with strange hellish creatures that began slaughtering the staff and generally making a mess of the place. Now with the screams of the damned keeping him up all night he'll have to go down there and find the source of this invasion and stop it if he ever wants a good night's sleep again.


Features:
- A five level campaign plus one secret level
- All new monsters all with new, original sprites and animations
- A brand new arsenal of weapons including the "Weird-Ass-Demon-Gun" which eats your enemies and then spits them at other enemies, the "Deep Fryer" which lets you deep fry your enemies and eat them for health and the "Compensator" which compensates for your embarrassing skill level by killing everything in the room
- A cartoony style
- A story told mainly through notes and environmental details (Notes are purely for story and never give you hints on progression or secrets so if you don't care about the story and just want to shoot some monsters you're free to ignore them.)
-2 new power-up items: the Can-of-Whoop-ass and the Thunderkiss, the former allowing you to kick enemies into walls or groups of their friends (Splattering them on impact) and the latter electrocuting any enemy who uses a melee attack on you.
- Juggle your enemies by kicking them into the air and continually shooting them, than slam them into the ground when you're done. 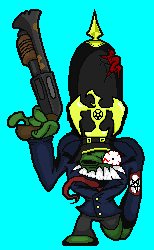 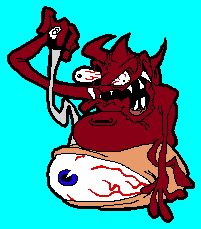 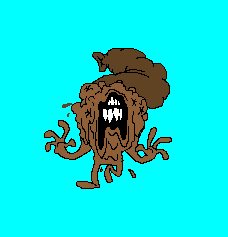 Spoiler:
(WARNING: Some elements of these are outdated and have been improved) 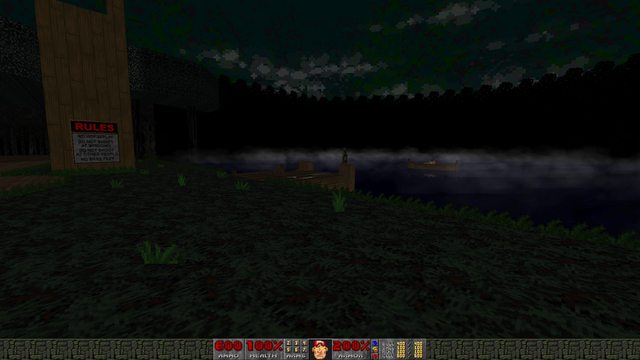 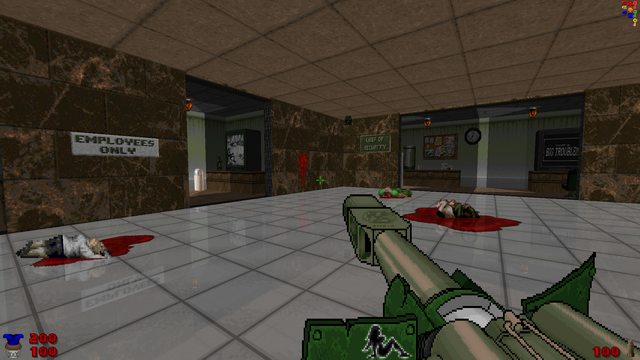 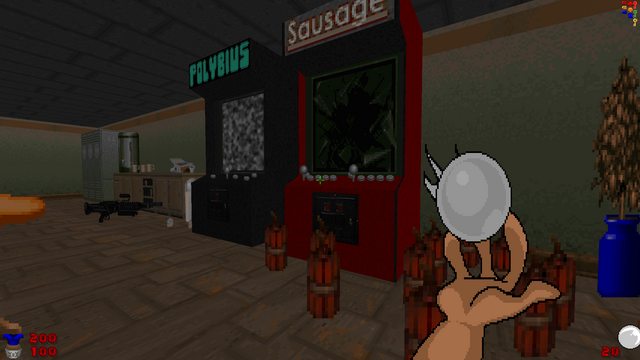 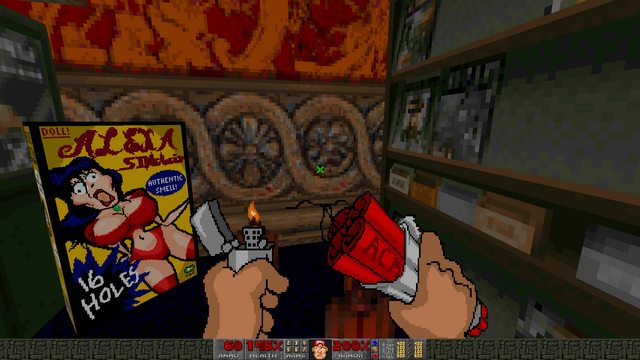 Credits:
-Full credits are in the Readme file
-Darsycho- voice of various monsters and other sound effects
-Captain J- Additional testing and support

For updates and information check out my Twitter: https://twitter.com/shorted_fuse?lang=en

Kinda like Redneck Rampage told through an underground comic book.

I'll be keeping an eye on this one. This looks cool.

Would you please use this to rewrite the entire combat system of Action Doom 2, please. This looks great.
Top

The visual style between the enemies/weapon and level design textures seems to clash quite a bit, but it looks pretty interesting regardless.
Top

Looking forward to this!
Top

Ah, so it's here! Welcome to ZDoom forum and thanks for informing this neat TC!
Top

So far I like this. I like the references to other games. I think I noticed one from Illbleed (Michael Reynolds museum if i'm correct). I'm assuming the tone is a mix of horror and comedy at least just for the demo? Not that it's a problem, but for whatever reason I think I was expecting something similar to Redneck Rampage. I really do like this though. Am excited to see the full version.
Top

It sure is campy and comfy. Let me try the demo and give ya some feedback!
Top

It's as if Blood had been made by mid nineties Lucasarts.
Top

I'm really enjoying this so far except for the end boss who seems to have too much health or I'm using the wrong weapon.

After entering the first building on the right and the boss shows up and spawns some monsters, then he does the jumpscare where he drops the fake body. The first time I played the demo this jumpscare didn't happen.

In the room with the red key ambush, next to the boxes with the four Splatterhouse masks, there is a guy hiding back there that you cannot interact with.

Messages display really quickly yet you don't want them on the screen forever right, a nice trade off is having the same text dumped to the console window. Ditto with the out of bounds text at the start (behind the school bus) because it was red I could barely make out what was being said.

It would be cool if the player could zoom their view or focus on an object, for example the girl in the canoe.

Thought of something else, was disappointed when I found the axe in the tree stump but could not use it. An axe could definitely replace a 2x4.
Last edited by Kills_Alone on Wed Oct 07, 2020 3:12 am, edited 4 times in total.
Top

So i played the demo.

Spoiler: look ma i'm helpful
- So your jumping height is very tiny but makes you dash. What a great concept! However when i press both movement key at the same time, it makes me do the second dash, which it wasn't intended. Or is it?

- Kicking-on-the-wall sound effect does not exist.

- Booze items does not play their pickup sound effect.

- I really love my weird-ass-gun... And i would like to call him Chompy. And what should i do if i see another Chompy? I can't do the akimbo with them unfortunately. Maybe turn them into a delicious ammo if i already have one?

- Bigass Mancubus replacement disappears for a sec after it dies.

- I also love the fact that you can kick the propane tank to make them enemies kingdom come. But what if you're not in the mood to kick the tank because you want to use it in other situations? I'm just asking to make the tank pushable, myes

- 2x4's animation is perfectly powerful and smooth. But not the secondary animation, though. The overall weapon animations might need some work, but they're all good!

- Dual Revolvers kick ass! Even the Secondary is badass. But is there any difference between the two fire modes, though? It's just an animation?

- I think Shotgun's Secondary fire mode consumes too much ammo. Pigs won't die in single shot, after all. And uhh for some reason, i still can do the secondary despite it's out of ammo.

- Sawed-Off is powerful and feels like it really likes Dubstep. Any idea with the Secondary fire mode, though?

- The M60 is equally beefy, but again, has no secondary fire mode. And the smoke is a bit too much.

- TNT's Secondary Projectile sometimes becomes blue. And i still have it on my hands when it's all empty. A_CheckReload might help with this one. 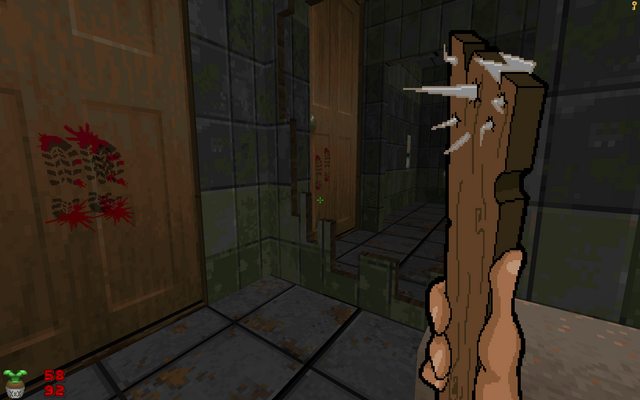 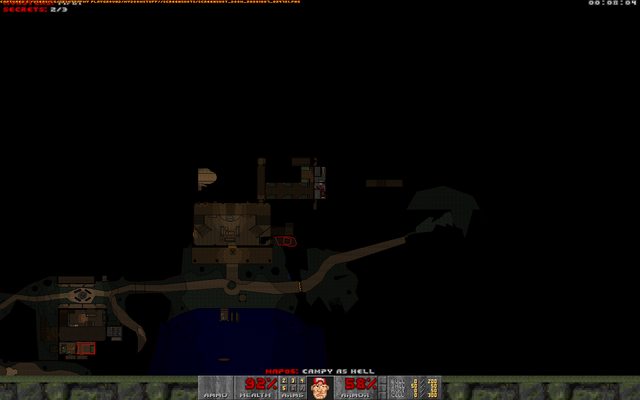 - So... I genuinely got stuck at this bathroom. The doors won't open. 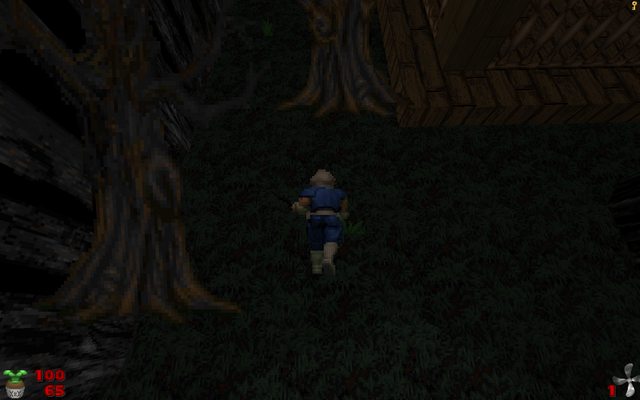 - Remember kids! Only you can save the trees from Billboard Disease by adding FORCEYBILLBOARD to 'em.

- So i'm getting quite a lot of damage. I thought this one out, but would be so helpful if the pigs drop some kind of health items upon death! poke-poke wink-wink 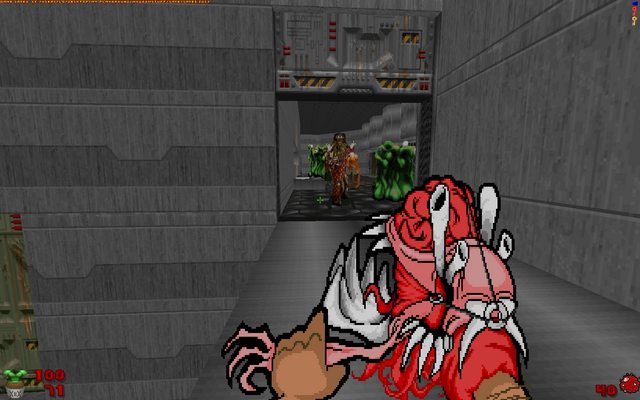 - What do you mean my Chompy can't eat them

Absolutely promising. Can't wait for more update! Also i would like to help you with the sound design and stuff. I might cook up something for you later!
Top

Thanks to everyone for all the feedback!

Yeah, weapons like the Super shotgun and LMG have secondary fires in the works but they weren't quite ready for prime time just yet so I left them out of this demo.

I wasn't aware of the dashing glitch but I'm working on a fix. I'm also adjusting the boss's health, he might be a bit too beefy as it is now.

The TNT flashing blue is a leftover from a previous mechanic where blue items were things that could be kicked, I made the TNT flash blue to show that you could kick it. Since I'm not making all blue things kickable anymore I should probably make the TNT not flash blue anymore.

The axe in the tree stump with the candy bar next to it was just a dumb reference to Friday the 13th but I totally should make it a usable weapon!

Everything else so far should be a pretty simple fix. I'm really stumped what happened for you with the bathroom doors though, they seem to work fine fine on my end but I'll continue to look into it.
Top

Glad we could help but... Bathroom door unlocked On your end? That's very strange. Maybe i was sequence breaking? Tho i'm sure i was heading the right way... Also used the toilets as well

Anyhoo, i really like how this is going. Good luck!
Top

Aaaawwwwweeesome..it's out ...thanks so much for making this ...
Top
19 posts