Cherno wrote:When I write a system that has the A.I. and the player be able to control the same kinds of vehicles, I commonly code the vehicles to have a generic pilot variable, which is a reference to any actor. In the vehicle functionality, I would then check if the pilot inherits from PlayerPawn or not (which would indicate a monster/A.I.). Giving commands / controlling the vehicle would need some duplication because it has to be part of the player pawn class as well as the monster pilot classes. However, this can be minimized by writing the code in such a way that players and monsters only give general commands to the vehicle, like changing it's movement direction and angle, and the vehicle itself would read these changes on it's own side.

To clarify: The vehicle has no mind of it's own, it ist just an empty shell that can be used by players and the A.I. in the same way.

If I were to do it all over again from scratch, I would definitely do something like this. Especially with what I've learned while making this project. However at this point I think the problem is too deeply embedded and would take a full rebuild to fix. Which I don't have the motivation for right now.

There are a lot of things I would have done differently in hindsight. It might just be a case of me pushing through and filing this under "lessons learned".
Top

Some stuff now has a chance to catch fire when damaged. There are also new types of debris, which allow debris to more closely match what is being destroyed. There has also been a very minor but important change to the way some particles handle velocity. Props also now have a special explosive property to handle... exploding. 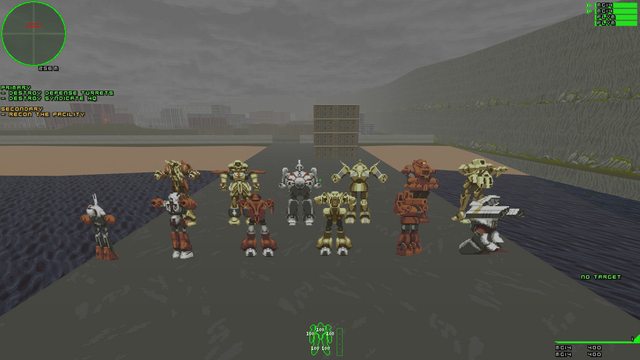 Look at these dudes
A bunch of new mechs are in and fully functional for both the player and AI. You probably won't be able to pilot all of them in the course of normal gameplay, since some of them are a little underpowered. 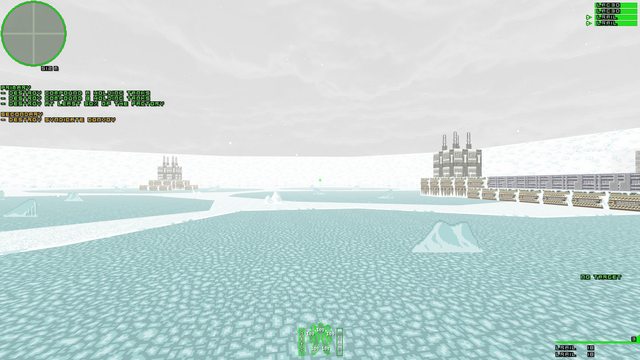 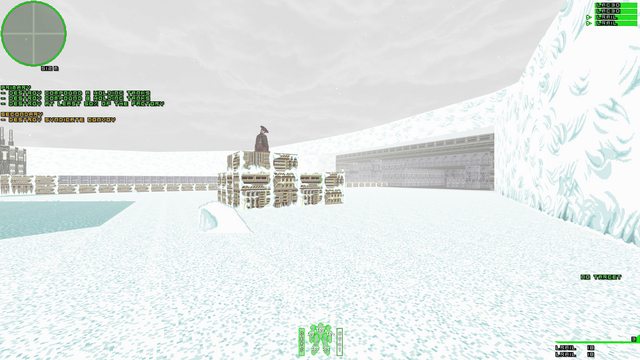 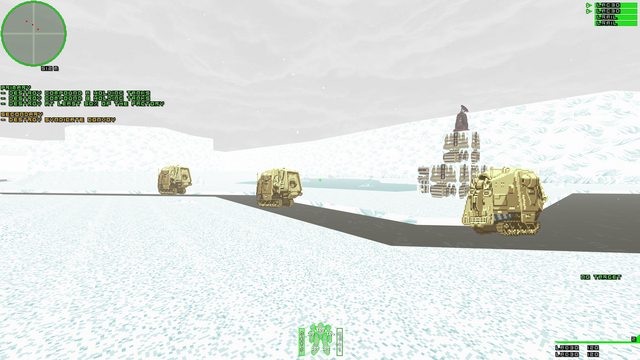 A good deal of the art for the arctic is done, and the foundations for the first mission have been put down. The vehicle you see there in the last shot is a new one, a heavy armored transport you'll be seeing in some convoy ambush type missions. Don't worry: as long as I draw breath I will never inflict a convoy escort mission on you. That's the ReformedJoe Guarantee (tm).

Other Minor Stuff That Doesn't Need a Screenshot.
-NPCs are now able to follow simple patrol paths, which gives me a lot more flexibility with mission design. This is separate from the patrol point infrastructure that already existed in gzdoom, since I needed a little more control.
-Your sensors can now be jammed. This comes in 2 forms: environmental interference and enemy action. Interference can be overcome with advanced sensors, but active enemy jamming requires ECM. Only special enemy units can jam you.
-Some mission objectives now have fail states.

This will probably be the last update for some time. Initially I was going to roll out a new version of the demo with the new art and various fixes, but I think now I'll wait until the second operation is finished. Demo 2 will be much more substantial and will include most of the stuff I've been rambling about in these updates.
Top

This is looking awesome. The new palette is really looking punchy as well.

Yeah, the regular patrol method seemed to have a problem as well - enemies had 360 degree vision when following a path, and wouldn't stay in a group unless meticulously scripted to wait for their buddies at every node.
Top

This is incredible. You're nailing the scale and feel of giant war machine combat.

Lookin' Great. I haven't checked out the demo yet, but will at some point in the future!
Top

As a longtime Mechwarrior fan I absolutely love this! It feels so good being able to run around at top speed while turning foes into scrap metal. The soundtrack is good too! Actually, may I know what these tracks are? Are they just remixes of the original score?
Top

Dragorix wrote:...The soundtrack is good too! Actually, may I know what these tracks are? Are they just remixes of the original score?

The original score is somewhat mixed in quality. I am at this point unsure how much of it is going to make its way into the mod.

Also general announcement: The project is on hiatus while I help Vostyok out with Ashes: Afterglow.
Top

ReformedJoe wrote:Also general announcement: The project is on hiatus while I help Vostyok out with Ashes: Afterglow.

Hopefully you get the itch to work on Iron Assault again soon.
Top

Does this support lzdoom?
Top

I played this briefly, but enjoyed it. It feels like a much improved version of Iron Assault, and I like the fact that you can customize your mech and save the design afterwards. Great work so far!
Top

Found this the other day, decided to give it a shot and DAMN I'm impressed! I've never played a mech game before (Unless you count Titanfall 2) but everything seemed pretty intuitive to learn and was loads of fun to play through!

In terms of adding multiplayer support, how difficult would it be to add multiple spawn points for players? I don't have a good understanding of how the code works and therefore have no idea what limitations might be in the way of having a multiplayer mode but the idea of having a deathmatch arena set up within an edit of the first level's city (Making the second area off-limits and adding Team/FFA separated spawns) seems like it would keep me and my brother occupied for weeks.

I'm really exited to see where the TC goes from here, it's an absolute blast and I can't wait to see what comes next

P.S. If you're looking for a source for more sound effects could I suggest a game called Tank Beat for the Nintendo DS? It had some pretty damn good SFX that I'd hate to see forgotten so soon, you should take a look if you're searching for anything Menu, GUI or Gun related
Top

Wisecrack34 wrote:Found this the other day, decided to give it a shot and DAMN I'm impressed! I've never played a mech game before (Unless you count Titanfall 2) but everything seemed pretty intuitive to learn and was loads of fun to play through!

It's honestly something I've put no thought into whatsoever. I'm sure I've done something somewhere in the scripting that precludes it. Not ruling it out (potential technical snarls aside), just super super low on the priority list.


Wisecrack34 wrote:I'm really exited to see where the TC goes from here, it's an absolute blast and I can't wait to see what comes next

Got some optimizations for projectiles, then friendly mech AI. Going to finish off the 2nd operation then bundle it all up and release another demo with all the improvements since 1.02.

Well, that's the plan anyway. In any case it'll be some time after Ashes : Afterglow drops (which, fingers crossed, will be some time this year).
Top

Played this mod again and it's funnier, tactical than ever. But maybe i forgot to bring more feedback about this project so here we go:

- Okay, i was bored and crazy enough to use the jumpjet and squash the enemy from above. But it takes a while than i imagined. Turrets kinda do fall down easily but mechs and tanks take a while to completely destroy them.

- Speaking of, i think there should be one loud landing sound effect because mechs are quite not huge enough because of that... In my weird opinion.

- Again, it's about the first mission. It seems you fixed the HQ glitch where you can demolish it by just destroying 4 satellite dishes. But because of that it takes hefty ammo to do so. If you happen to choose any weapon but laser based one, you eventually have to abort the whole mission because you're out of ammo.

Also just a trivial suggestion, but can i expect to hear the taunt voice clips from the player? That would be extra satisfying!

EDIT: Also have fun cuz i drew something for ya and the original game
Top

Captain J wrote:- Again, it's about the first mission. It seems you fixed the HQ glitch where you can demolish it by just destroying 4 satellite dishes. But because of that it takes hefty ammo to do so. If you happen to choose any weapon but laser based one, you eventually have to abort the whole mission because you're out of ammo.

If you shoot buildings with HE rockets they will go down super fast. I swapped one missile launcher on default mech for HE rockets and played through the first mission with no problems.
Top
142 posts