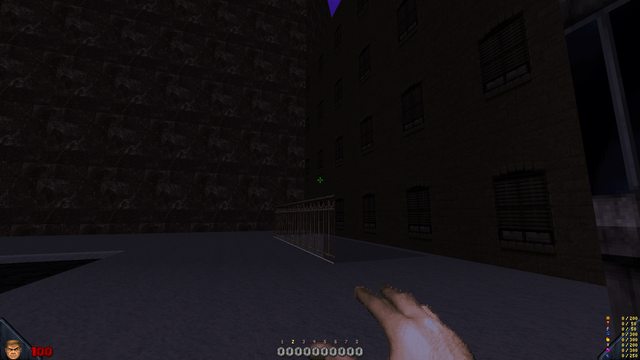 - I wonder what this Speakeasy's all about that i just can't get inside? Am i bounded to enter there somehow and unlock the super-secret ending? Also that fence is actually glowing at night.

- Random Revolver is something i really love to use. Half frustrating, Half devastating. It also shoots out a friggin car and i love it! But yeah 'bout that, i've got a question: why my score does not increase when i'm far away from my car while it's having a roadkill spree? 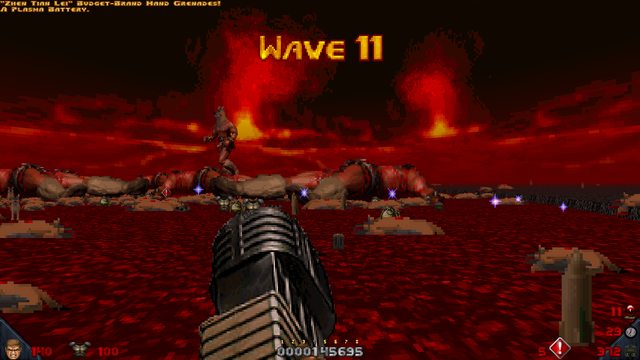 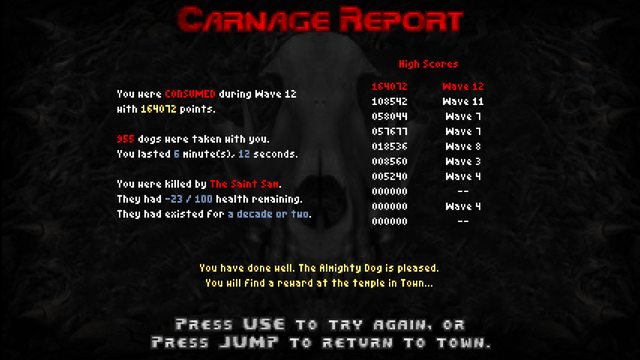 - Uhhhhhhh wow. I finally did it. Before this run i shamefully cheated through to see what actually happens after i beat this mode, because it deemed to be impossible with my skills. Couldn't beat it with that attitude, after all. I did it!

Hey there, great to see you're releasing updates so quickly! I did another episode of this because I was having a lot of fun.

I was still playing version 1.0 since I recorded this a few days ago. While I generally enjoyed everything, figured I would give you a bit of constructive criticism since it might be helpful. Of course my opinions aren't objective so what I dislike might be enjoyable for others, but food for thought.

Generally I find Realism 64 to be a really annoying mod. Yes I know it's a funny thing that changes up strategy and everything, but the fog is so thick it's way worse than the N64 and it can turn the stage into a slog, especially if you get multiple rounds. It means you have to stay away from large areas so I like the strategic part, but I would recommend just increase the distance of visibility a little so it's not completely obnoxious and a bit more fun.

The tank is great and everything but it can also be completely boring since you basically don't have to worry about anything. Maybe having some limitation with health or ammo or something could make that more interesting, though I do understand the strategy is just to clear as many monsters as you can in that time.

Some of the maps I just don't find enjoyable. The island map spawns sooo many enemies it just feels incredibly spammy, and you're not gonna kill many of them even if you get a tank every round. I guess people could enjoy that endless horde feeling but I didn't enjoy it. Also maps like "a bridge too far" have a fun gimmick for sure but after that it feels very one dimensional, and there's really not much space to do anything. I don't know what you could do, maybe add a lower cat walk type area for some more variation and elevation?

I shot the roulette revolver and it spawned a car which instakilled me as I was moving forward at the time. Didn't even know it shot cars before that lol. I love the projectile but was it intended to clip the player like that if they are running forward? Was quite a crappy death to have on the final boss of an endurance run.

I love the hub map, it's very detailed and has lots going on, but I found it sometimes to feel like a drag having to run around to stuff I wanted in such a big area. Perhaps if there was some way to have to find stuff the first time, and then have easier quicker access after?

That's everything I could think of, again for the most part loving the mod just felt there might be a couple things to adjust. Some of these may have even been fixed since I last played it. Anyway congrats on such a great release and good luck in continuing to polish it!
Top 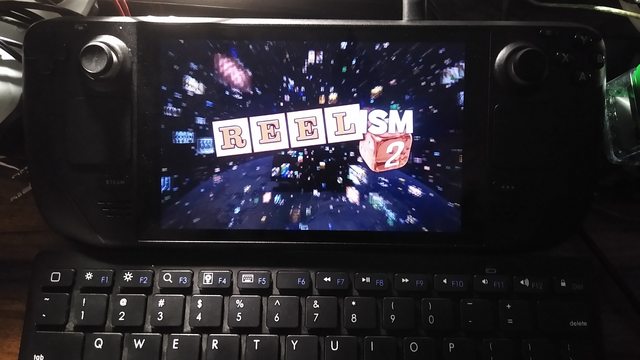 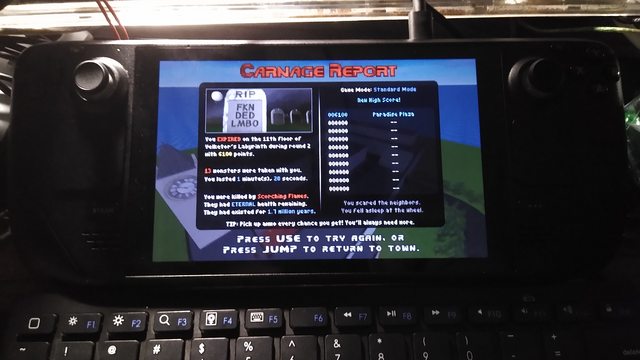 Don't ask me how I got it running just yet; I'm still figuring out ways to make it less of an absolute war-crime to set up.
Top

wildweasel wrote:The Steam Deck? Yeah, it runs Doom Reelism 2.
... ...
Don't ask me how I got it running just yet; I'm still figuring out ways to make it less of an absolute war-crime to set up.

Apparently I have just found out today that the SteamDeck is not using Debian as I originally thought; it is using Arch. Which means that GZDoom should be easily accessible through pacman since GZDoom is available on the AUR. (afaik ... I don't know how pacman and AUR actually works)

I despise pacman since it has an absolutely unintuitive syntax that you have to remember - but to install packages through pacman it's just pacman -S <package name>. More here: https://itsfoss.com/pacman-command/

EDIT: Turns out I was wrong - using the AUR is done via Paru - which has to be installed - https://github.com/Morganamilo/paru
Top

sandwedge wrote:I shot the roulette revolver and it spawned a car which instakilled me as I was moving forward at the time. Didn't even know it shot cars before that lol. I love the projectile but was it intended to clip the player like that if they are running forward? Was quite a crappy death to have on the final boss of an endurance run.

Since i love to use random revolver so much, i've got some tips to tell you so you can use it with less frustration:

- First, always use this gun in large, open places with no obstacles because... You know what happened; it shoots out explosives like rocket and a car.

- Always empty the shots if you get either a dud or silly projectiles. As far as i know, it saves the current shots despite switching into other weapon.

- If you happen to get OP shots like BFG ball, be sure to save them for a good use. Don't waste. Waste them on a large crowd if possible.

- So about the car, basically it's like a projectile. It keeps going forward and explodes when hits something solid. A major reason why you should use this gun in open places because the size is huge it hits wrong props once being spawned.

It's so random it's so good.
Top

This new Reelism mod is going to be amazing!

But check out this add-on, featuring the ghosts from Pac-Man!
https://mobile.twitter.com/nocontxtpacm ... 6443227151
Top

Spoiler:
Hey, so I encountered a bug where when I punched one of the crates from Crate Shower with the Thousand Fists of Fury, the game crashes. Unfortunately, I forgot the console log for the crash so maybe you could try to reproduce the bug.

For some reason the Cars on gutrot just do not want to render, and neither does the tank. any ideas what I can do to fix this?
Top

Back again with some actual bug reports this time.

First, sometimes if you kill Assault Troopers as they're flying, the sound of their jetpack still plays; although I don't remember if that happens when you gib them or if you launch them with, say, the baseball bat. 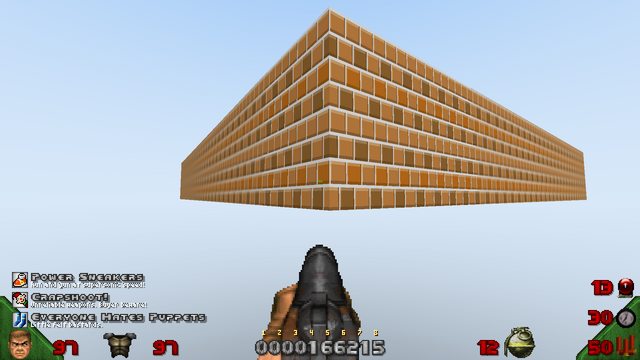 Which renderer are you using, and what is your video hardware?
Top

Which renderer are you using, and what is your video hardware?

Well, I'm Not sure what exactly caused the problem in the first place. I tried OpenGL and Vulkan on my RX-580, but either way the cars would come out either Invisible, completely flat, or stretched and torn nonsensically (with a rare normal car). However, finally trying a 100% completely fresh GZdoom install in a new location with Vulkan resulted in things rendering properly. It may have been a problem with a file conflict in where most of my doom stuff has been stored, or some other weird minor fault in my system, since overwriting what was in my old gzdoom location still results in rendering errors.

I've got a way to play normally, but if this looks familiar, I've at least got this screenshot of it. (Apologies for the mid damage screen, but this is the one that got taken.) 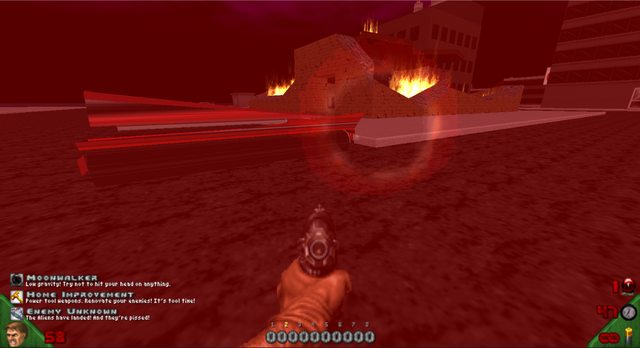 For cars, shoot r_drawvoxels 1 into the console.
For the tank, I dunno. It's just a standard 3D model.
Top

Thanks, I'm not entirely sure why this happened but I think I've accounted for it.
Top
482 posts