(Hammer of Retribution hurts you now)

Joking aside, this update exceeds my expectations hoooh man it's too much!! I enjoyed every single part of it and now it definitely feels a lot random and complete. It also has some hidden stuff i couldn't find as well, so the replay value is there. I can't wait for custom contributions as well!

I played every single map plus new ones, including boss rush mode. Saw the ending and it was worth it! Along the way i made some feedback 'n suggestions that might come in handy. 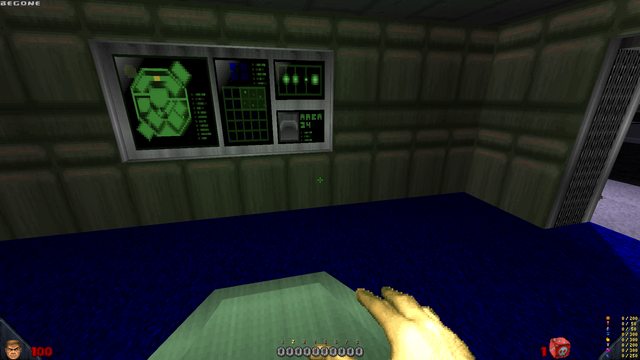 - Dunno why, but when i either enter the level select teleporter or press Change Gamemode, the text BEGONE appears on the console. Ominous spoopy easter egg foreshadowing?? :O 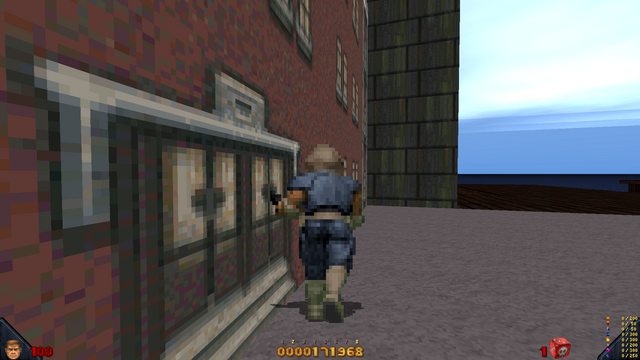 - In the city, i just noticed that this building has tiny door. I guess that's the residence of them tiny imps 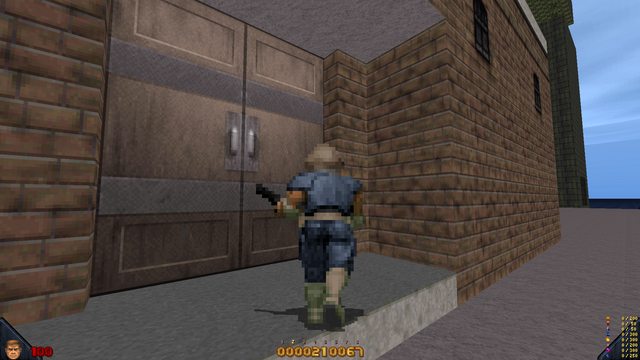 - And this building must be for hellgoats

- Grandpa's Antique doesn't play reloading sound effect in Power Sneakers mode. Also it consumes 2 shells while it has one barrel! 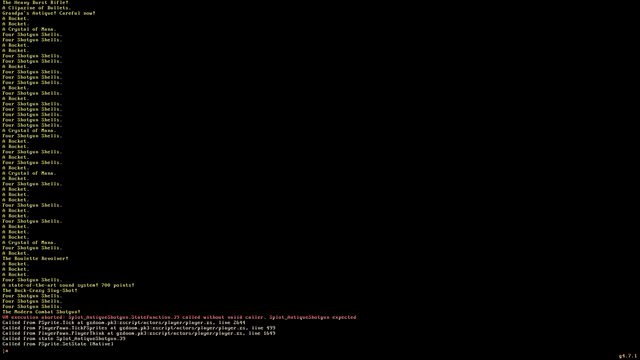 And uhh... Oops. I was playing in Big. Red. Mess. level with Endurance Mode on. I broke Grandpa's Antique in there, silly ol' me, and then the game crashed. My current GZDoom version is g4.1.7 64-bit.

- Noice job giving us the warning sound before we get Grease is the Word. Unfortunately THE JERK dislikes to be progressive and prefers the cheap shot: spawning without any warning or preparations.

- GOU-4 Minigun has that glitch where it skips the spin-up animation. It can be activated by firing it again after depleting ammo, and then picking up the ammo during spin-down animation.

- "Move Constantly to avoid McGuffin's Death Beam."... Well yeah, the tip helps except the audio feedback is rather quiet from the distance and i can barely hear it. Meeting him in foggy places? It's Forced-waving Goodbye, then.


Spoiler: EDIT: A literal SPOILER! Forgot to hide this there
- Oh wow, i can go straight to Doggy Hell. But this time, i have a chance to actually push back although it really is hard as balls. I mean it's supposed to be relentlessly hard but would've been nice if retrying saved my current weaponry instead of cleaning everything i had. You can try it anytime sure, but it seems like a huge time-consuming investment unless you are a true g a m e r.

A more minor bug is that for some reason the "simple arrow" cursor option is invisible in fullscreen. It displays fine in Windowed mode so I'm not sure what's going on there.

Anyway I've been having a ton of fun with this mod! There's a great "one more go" feeling and the game does feel like a worthy sequel to the original mod. Really looking forward to seeing what extra reels and maps people come up with (and I might even try bullshitting my way through Zscript to see if I can make anything)

I do have some poorly-organised feedback while I'm at it:

Spoiler:
- With Town now being bigger, I find it pretty hard to navigate. Obivously I get that the side-NPCs are supposed to somewhat hidden but some kind of signposting would be useful so I remember what direction I have to go in just to get back to the starting area.
- I think there should be some kind of warning when you try to buy an item that would put your points total under the Hell Circus requirement. It's rather anxiety-inducing when you're trying to buy upgrades but still want enough points to enter the bonus levels.
- Can you do anything with the hotdog? I've found a couple of NPCs that react to it but none that'll actually accept it.

- Once on A Bridge Too Far I had The Jerk active and tried to use one of the boost pads to get to the other side, and even though I was several meters in the air The Jerk still managed to kill me. Does he have some kind of height-ignoring melee?
- Is it just me or is The Jerk + Micro Mode on P██ in the S██ an unwinable situation? Because of the map size the Jerk can lock onto you instantly and you can't outrun him at all.

- Could just be personal opinion, but I think the map difficulty options aren't 100% accurate. For example Overflow is rated 2/4 but I think it's one of the hardest maps of the non-Hell Circus set. A seperate map size rating might also be handy?
- For some reason whenever I enter the map selection menu in Town the text "BEGONE" shows in the log. Some kind of weird leftover debug thing?

One last thing is that I've had a Vulkan-related Very Fatal Error when re-focusing the Window on GZDoom after tabbing out to different Windows while playing this mod. I think it's an issue with GZDoom itself and not Reelism 2 but I have nowhere else to put the crash dump.
You do not have the required permissions to view the files attached to this post.
Top

Hey I finally tried the release version and it's awesome. Thanks.
Top

Small question for modding; how should we test a boss? Should we spawn it in the same way as the reels (i.e. "summon SlotBoss_DogPope") or should we summon the boss directly?

EDIT: Also a small bug; if blood type (in the F5 graphics menu) is set to include particles, then shooting metallic objects (like cars, robots, skeletons, etc) will still produce blood particles
Top

Beed28 wrote:Small question for modding; how should we test a boss? Should we spawn it in the same way as the reels (i.e. "summon SlotBoss_DogPope") or should we summon the boss directly?

Version 1.1 is out, fixing various issues that we've seen pop up post-release, along with a few extra little bits of balance and polish. God willing, this'll be the last update for a little while so we can go off and actually play games instead of building Frankensteins out of them!

The team recently learned some troubling things about one of the contributors to this mod. We're not comfortable with keeping their content in the mod, so we've replaced it with some new content from a friend of ours who stepped up to the plate for us. Thankfully, it wasn't a lot of stuff, so like 99.9% of the mod is still there untouched.

The update is now available at https://reelism.dog/, which continues to be a real URL. We encourage you to download it and hope you enjoy the replacement content. We also hope to have an update that adds new content, instead of just replacing it, out in the nigh future.

We sincerely apologise for all of this. We were unaware of this person's notoriety in circles outside of our own, and will need to be more careful about our guests and collaborations in the future. Thank you for letting us know and for your understanding.

Changelog wrote:Circumstances dictated that a small set of content had to be replaced. Please understand.

eltiolavara9 wrote:ive spent a good hour or so trying to figure out what the orb does aside from kill you

For a period before it Does Its Thing, it hurts enemies surrounding you. You can also put it away safely at any point during the animation so if you're good with timing you can use it as a quick area-of-effect attack.

There might be other uses as well, but I didn't make that weapon so I'm not hugely familiar with all the inner workings.

late reply but thanks! thats a really cool skill weapon then
Top

Hey, Yoshiatom mentioned Overflow and... Yeah i think it's quite deceptive with the difficulty rating. Not just it's claustrophobic for the most part, it has insta-kill waters that can be mistaken as harmless ones you can dive in without dying.

Also while i think adventuring through the level is one of the fun factors of REELism, this map suffers campers-always-win trope rather too much. Cool looking map tho! I'll give it that.
Top

i think every map suffers from campers-always-win, thankfully the score system makes you want to do so less and the reel that gives every enemy wings is a death sentence if you are camping
also i think overflow's difficulty rating is fine actually (ok maybe it should be 3), but also. this might be a hot take but gutrot islands difficulty should be 2 or 3, it has a very comfortable amount of space to run around in and abudndant items
a bridge too far is the true difficulty champion from my experience
Top

Finally got through the Astrolab X maze. That actually is a really good question.
Top

eltiolavara9 wrote:and the reel that gives every enemy wings is a death sentence if you are camping

Oh yeah, that's a fair point of preventing the campers exploiting safe spots. It doesn't happen often anymore but you had a lot of good spots in the previous game. You could get some of them good score boost by chucking some explosives below to the horde you gathered in. Good times.

also. this might be a hot take but gutrot islands difficulty should be 2 or 3, it has a very comfortable amount of space to run around in and abudndant items
a bridge too far is the true difficulty champion from my experience

Yeah, i guess 3 rating would be enough. And about Rotgut Island, 2 rating if you have good computer. 4 Ratings if you don't.


Spoiler: Extra feedback and a question. Literal Spoiler awaits!
- So i did activate G██████ with the Dice and summoned Barons and Hell Knights. When they get gibbed... Surprise! They're a Pinata filled with red chunks and paste.

- Did anyone ever encounter a doom eternal Marauder? I used the dice and he appeared out of nowhere. He spawns doggos and throw axe at me. He seems immune to most of the damage types. Any idea how i can beat this creature?

Spoiler: Extra feedback and a question. Literal Spoiler awaits!
- So i did activate G██████ with the Dice and summoned Barons and Hell Knights. When they get gibbed... Surprise! They're a Pinata filled with red chunks and paste.

Spoiler: Response
The Bruisers appear during Boss Rush mode. They could use a little extra love, but we were running out of steam near the end of v1.0 development.

Spoiler: Extra feedback and a question. Literal Spoiler awaits!
- Did anyone ever encounter a doom eternal Marauder? I used the dice and he appeared out of nowhere. He spawns doggos and throw axe at me. He seems immune to most of the damage types. Any idea how i can beat this creature?

Spoiler: Response
The Marauder appears as the 999 jackpot on Flesh Palace. He's pulled directly from MetaDoom and is fought the exact same way as he is in that mod - keep a distance to coax him into using his melee attack, then nail him!

Sgt. Ham wrote:Finally got through the Astrolab X maze. That actually is a really good question.

Sgt. Ham wrote:Finally got through the Astrolab X maze. That actually is a really good question.