MacGuffin is back, and he's throwing bottles!
Top

To celebrate the upcoming 10th anniversary of Reelism on December 21st 2021, what is your favourite moment in Reelism and Reelism 2?
Top

From 1, I'd have to say it was always slaughtering Jetpack Larry in Dog mode on the bridge cuz he's such a nuisance in most instances, but that map was just killing grounds for him.
From 2, as horrible as it sounds, it's always running over the masses of puppets and dogs as a tank because of the sheer amounts that spawn during those waves and just run straight towards the player.
Top 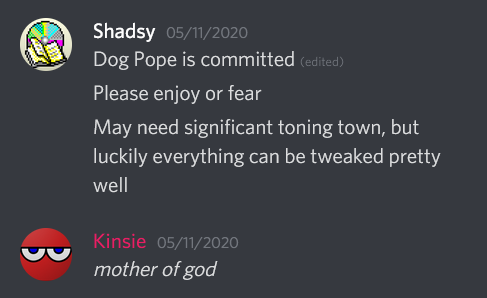 My first time dunking the basketball during development. Reelism 2 was still just an experimental sandbox at the time, with some basic weapons and monsters and a test map. That was the first time I think we realized what levels of chaos we were going to be able to pull off with ZScript this time around.
Top

That would be a question for myself but, my favourites are Reelism's custom mods.

Mine in Reelism 1 is the custom map called The Motherboard, where it's map specific jackpot spawns the Men in Black, who are not affected by the Dog Whistle.
and the other custom Reelism 1 addons is the 25ft. Office temp by scalliano, where she attacks by shooting a plasma ball and stomping her feet. She also has a unique death animation! (She collapses before she explodes.)

The other is Bouncytem's Reelism 2 mod pack, where it's custom content includes Pie-ass (Pirates spawn on the map), Tyketto's tome of power (Weapons behave differently when augmented), and the return of the Reelism 1 map, Continuum of Discord. (That's the map that was also in ZDoom wars and Ghouls vs Humans 3 under the name "Continuum of Silence.")
Top

So I opened the topic and got excited about a Reelism 2, opened the download link, decided to read the preserved original post for fun, completely forgot that I had the download open in another tab, got bummed out that it wasn't released yet, then closed the tab to be smacked in the face with the profits of my idiocy.
Top

When I saw the Ringmaster's eyes in that one map.
Top

In the 10th Anniversary of Reelism, who is your favourite boss? (Same goes to custom bosses.)
Top

Exactly 10 years ago, the first release of my incredibly stupid Doom mod Reelism was released. Here's the original release trailer, recreated shot by shot in the next version of Reelism 2, standing testament to how few ideas I've had in the last decade.

We've fought dogs, imps, robots and cowboys over the last 10 years...
And fought bosses like Dog Pope, Mecha-Hitler and a Wizard in a monstertruck.
We also made custom maps, weapons, enemies and bosses like sheep, Korax, the 25ft Office Temp and the Motherboard.
but 10 years later, it's still going strong!

But is there something going to be announced since it's the 10th Anniversary of Reelism?
Top

undeadmonk354 wrote:But is there something going to be announced since it's the 10th Anniversary of Reelism?

To everybody who plays Reelism over the years, we would like to say Merry Christmas and a Happy New Year!
Top