Kinsie wrote:You can't, but other things can...

Spoiler:
just checked the vent out, again and i just realized one thing

Is this goddamn Death Star reference? Damn man, imagine this on Multiplayer.

It's been a few days since we kicked out the Early Excess version of Reelism 2, and we've gotten a decent amount of feedback already! Thanks everyone who's sent feedback, bug reports, or played the mod on stream. Your thoughts are appreciated and being taken into account!

I've been taking a couple of days to relax, reflect and do things that aren't working on this, but I've started work on a hotfix patch. This will fix some of the issues raised, but not all of them - we've been working for like five goddamn months trying to fix that Basketball VM abort, it's probably gonna need someone who's smarter than I am to look at it.

Currently, I'm looking to include more reliable ammo spawning, a slight nerf to the grease reel, more frequent health kits, friendly dogs damaging bosses, better Scrag clean-up and a half-sized version of Gutrot that should hopefully(?) be more playable on more machines. There'll probably be more as additional feedback filters in, and that'll probably land next week, but when exactly depends on real-life events, how badly I get consumed by Jeff Minter's new game, and whether or not I go back to give MetaDoom some much-needed love. Seriously, the last time I touched it was before Eternal came out. Got a few things to catch up on.

Again, thanks for the kind words and the fair critique! This is just the beginning. We've got some fun stuff planned!
Top

The initial preview release has a lot of decent qualities and a lot of promise. One notable improvement is how explosions are handled; chained explosions in the original reelism could get a little out of hand and bog my systems down. Guess it's everything to do with the reimplementation in ACS.

Just wanted to toss in another (minor) bug - if the flamethrower runs out of ammo during +attack and switches to something like the snowball the attack sound will still loop until weapon switch.
Top 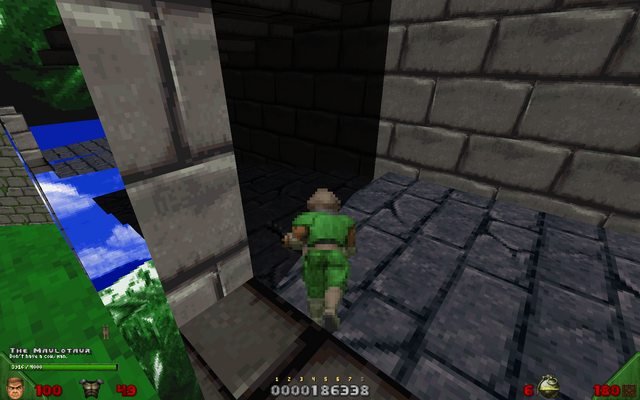 - In the castle map, there's some area dogs can get through and ruin the actual perfect kill.

- Also is this real? Because Maulotaur casted that earth-shattering, player's-bane ground fire trail thing and it actually got me in the mid air. Yeah, this is how it works in the original game(i think) but it's the modern frantic gameplay we are talking about.

- Plus, just noticed that every ballistic weapon ejects no casings. For a better performance, i guess?
Top

Reelism 64 continues to be the most pain-in-the-ass modifier. Especially when you're looking for health (speaking of, thanks for upping the frequency on them Kinsie). I managed to get a win on the beach, but I get wasted pretty quickly on the other maps for some reason. Mostly just dumb luck . . . but that's Reelsim.
Top

I was partially expecting mimigas when I misread "¡Amigos y Amigas!" for a second. Don't like how the dialogue/text in the town has a tendency to go off-screen, since I don't know how to scale it down to make it readable in a windowed view.
Top

You know, this year is wild, between all those disasters and all those unexpected news, this is the latter, i expected a lot of things coming, but not this, for sure.
Top

Was fighting the boring ghost boss in Flesh Palace and he was at like 300 health but then my game crashed.
Still don't think i played enough of the mod because there's a lot to see and it's a really solid mod so far.

Also, any plans for the Tesla rocket as an inventory item or the meat hook?
Top

Are you gonna do anything with powerups like berzerk, invulnerability, radsuits and the like? There's gotta be something goin' for them in this. Maybe add a "Day of all the Blood" slot poking at bad creepypastas with tons of gibs, blood, and actual Blood references?
please add some type of absurdly cute monsters who are hilariously powerful to Reelism 2
Top

If the Crapshoot reel comes back, may I sugest adding the broken Super Shotgun from Extreme Weapons Pack?
Top

Gothic wrote:If the Crapshoot reel comes back, may I sugest adding the broken Super Shotgun from Extreme Weapons Pack?

I hope we get Crapshoot back, I loved the shitty homing missile launcher and the whatever the hell that weird plasma rifle thing was.
Top

Played the early access multiple times on stream and on my own time and must say overall that I'm very excited by what is to come. I'm positive that there will surely be more reels in the finished version and I must agree I do miss crap shoot lol. Other than that it was extremely refreshing to see a lot of the original Reelism maps and weapons get a fresh coat of paint, the only exception for me being the burst rifle which seems to be pretty nerfed compared to it's Reelism 1 counterpart. Past that the only real gripe I had was the inconstant health and weapon spawns at times on larger maps. One other thing; I noticed there was no number correlation with the reels in the hud and granted this was a fairly small part of the original Reelism but will there jackpots in reelism 2 for things like straights 3-3-3 etc.? May have answered my own question there but I was curious about that.
Top

Gothic wrote:If the Crapshoot reel comes back, may I sugest adding the broken Super Shotgun from Extreme Weapons Pack?

Hot Take: we should bring HYPERWEPONS! reel back and that weapon should be the hyper one.
Top

Some touches I really liked:

* Yetis dropping 3 ammo items. I think this should be done for any bulky enemies in the future.
* The sportsball reel having different non-weapon pickups as well as weapons. Will this be done for other reels?

However, as for Reelism 1 weapons I miss... I’m missing the Jackhammer a lot. I feel like that’s the weapon that should come back the most. The Freezethrower would be a nice addition to the NRG reel as well.
Top

Feel free to use my sprites of a dog wearing a beret (I used it for the DogPope's summoned Swiss Dog Guard in Doomvengers). This is all brilliant so far! Can't wait to see more!

You do not have the required permissions to view the files attached to this post.
Top
455 posts