holy crap im so ready, im gonna go back and play some of the original to warm up for this!
Top

What was the point of posting this? Do you have anything significant to add?
Top

HELL YES
i hope there's a harder mode too

EDIT::: is it going to run better than the original reelism? because my computer is pretty decent and OG reelism ran pretty badly, especially with smoke enabled and/or the jetpack larry reel
Last edited by eltiolavara9 on Fri Apr 03, 2020 1:50 pm, edited 1 time in total.
Top

Looks promising! Especially for a sequel to one of the funniest mods ever created.
Top

When are we getting Reelism 2: Episode 1?
Top

Interesting. Looking forward to this, even if I normally can't last even one round in the first one.
Top

What was the point of posting this? Do you have anything significant to add?

no one will understand the original thought
Top

What was the point of posting this? Do you have anything significant to add?

no one will understand the original thought

namsan wrote:I hope we can see bronies and recolored sonic clones again in Reelism 2, it was so funny.

The former is so dated, they ain't returning (see footnote 4 in the OP) but Kinsie put something even better in their place...
Top

It's been a few days since I shouted about this, so I figure I should post a little more, just to confirm that this is, in actual fact, a thing that is being worked on and not an April Fools joke.

We're beavering away on all sorts of things, and doing experiments with a lot of shifting and moving parts - as an example, recently two similar weapons were merged together to create something unique out of the best bits of both - so I don't want to post too much about stuff that isn't solid. I'd be amiss to post some of the coming attractions, though.

The Basketball is your typical run of the mill rubber bladder in a leather sack. You can shoot it at enemies to hurt them, and catch it on the rebound for bonus points. The alternate fire launches you up in the air for a slam-dunk attack that does AOE damage, at the cost of sending the ball bouncing high and far and possibly being a huge pain to retrieve. While we haven't started on any such thing yet, I'd be very surprised if we didn't add at least one basketball-related minigame at some point. Maybe that shoot-out death-squad scene from Escape from LA? I dunno. 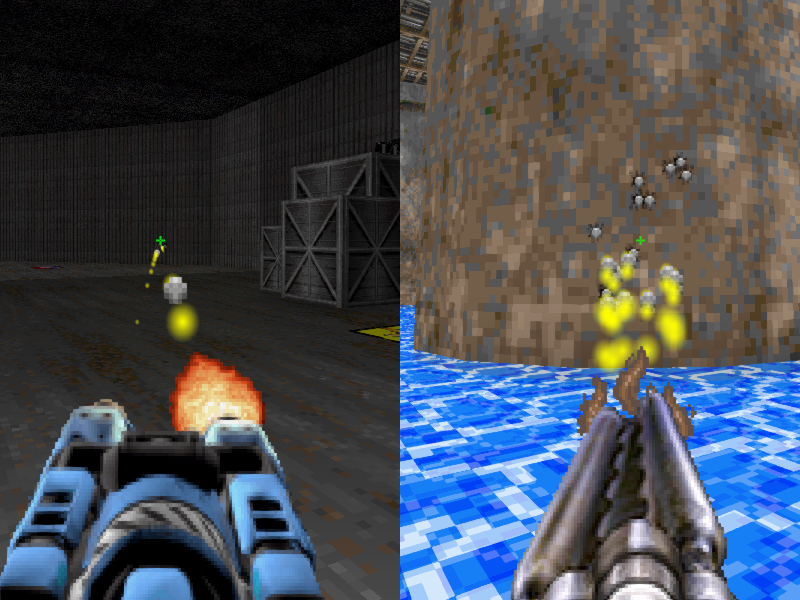 Gee Bill! How come your mom lets you have two Nailguns? The one on the left (using art from an unused weapon in Doom 2016) acts as you'd expect a Quake-style nailgun to do, while the one on the right (using some wonderful sprites by Sgt. Shivers) acts as a sort of Nail-Shotgun, ala Quake 3 Team Arena. These are from a reel being developed by newcomer Techokami that has a "home renovation" theme. 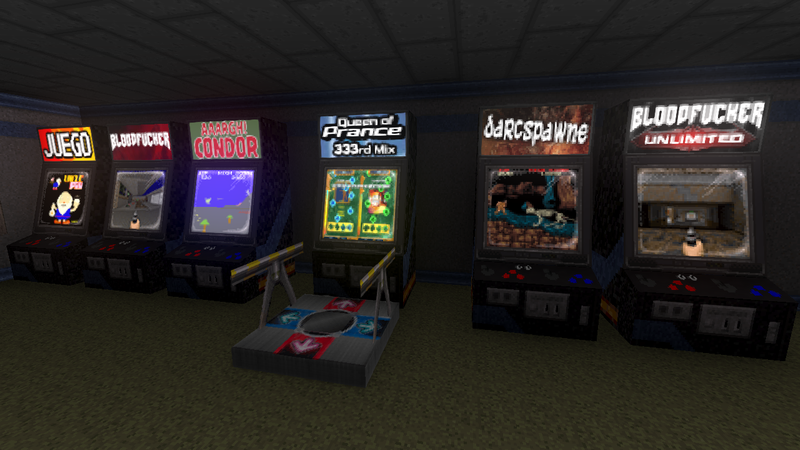 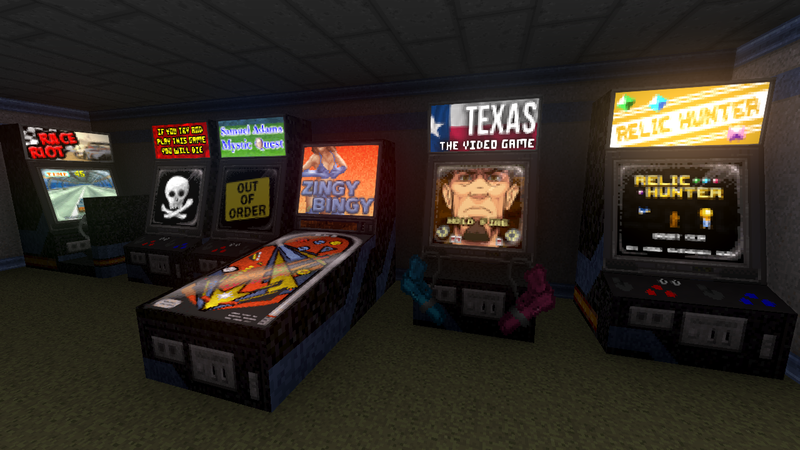 Work on the third generation Gutrot Island is coming along slowly, but surely. A lot of the old bits of abstract geometry are getting fleshed out into actual enterable buildings with stuff inside them, and that's taking a bit of time even before factoring in the whole thing with wallpapering them with in-jokes and easter eggs. Here's some scenery from the local video arcade that took way too long to piece together. Next up, having to stretch my hole-riddled brain to remember what a pub looked like back in the Before Times!
Top

Brilliant, I loved the first one! (Hey, there's that guy from Outlaws!)
Top

I just remembered, a few months ago I thought it would be interesting to have Basilissa from High Noon Drifter as a boss in Reelism, more so than DevilDriver because you'd be turning a character made to make the player feel powerful against them. If the Outlaws enemies are still in this one, they could accompany her in boss rush if that's still in this one.
Top

Wow, you got Bloodfucker Unlimited? MOTY.
That name is so brilliantly edgy it reminds me of all those Mortal Kombat clones that I'm sure at some point suggested having that name, but backpedaled because they knew, deep down, that the pertinent agencies wouldn't let it fly.
Top

I hope that Arcade place has Balls of Steel pinball and Sym Homeless. Because people know those stuff are good.