Is the Jerk a sub-boss?
Top

He is a possible result of the "what enemies will you get?" reel.
Top

I can't wait for this, I've spent wayyyyyyyyy too much time wasting my life on Reelism 1.
Top

GZDoom dev added new sprite replacement for the wolf3d dog before, originally made by Nash. So both sprites of REELism and GZDoom are conflicting. I'm sure Kins will fix this in the sequel.

Yeah this has been addressed in the form of just putting the wolf3d dogs into the PWAD.

Play the original Reelism and find out!

Meanwhile, I have finished adding wizards to the game. Expect wizard crimes.
Top

Techokami wrote:Meanwhile, I have finished adding wizards to the game. Expect wizard crimes.

Hope there's no Dick-Wizard variant with the name goes Arch-Vile.

The wizards are originally an addon made by Gothic for Reelism 1, right?
Top

Totally unrelated! That addon was just the Heretic/Hexen wizards dropped in. My wizards are very, very different, and I'll leave it at that.
Top

Hey, everyone! It's been a few minutes since I last dumped some info. We've been quietly beavering away on various things here and there, occasionally falling victim to flights of feature creep as we usually do. It wouldn't be Reelism if we didn't, to be honest.

First off, a correction:

Kinsie wrote:I think at this point the Minigun and the Brick are pretty much the only weapons directly ported over from Reelism 1, and the latter is probably going to get completely redone at some point when I can give a shit.

Secondly, I promised earlier to talk about Slot 1, so I might as well.

Of Reelism's three slots that reels get categorized into, Slot 1 was generally the least interesting, with a lot of its effects being fairly unexciting and the rest being kind of gimmicky. I thought I'd go over a bunch of Reelism 1's old Slot 1 reels and detail how they've changed or been replaced in Reelism 2...

Too. Much. Caffeine. (Double firing speed) and Green is Turbo! (Double player movement): These have been combined into one slot, Power Sneakers, for maximum effect. Not exactly revolutionary, but it makes way more sense this way.

Find the Antidote (Health slowly drains): While this had a interesting gameplay effect in creating additional urgency, it wasn't all that interesting from an audio/visual perspective. We've given it a new bit of flavoring beyond that of a simple beep, necessitating a new name: BEES! No prizes for guessing what we've changed.

Reelism 64 (Dense fog): This remains the same gameplay-wise, but has been completely rebuilt under the hood to properly restore all the changes it makes to the map once it ends, meaning it no longer clobbers any non-default sector coloring/fog settings! I'm so sorry Reelism 1 map makers, but ACS just wasn't up to the task back in the day...

iReelism (Fake touch controls overlay): While fiddling with the player's view is fun, the mobile FPSes this reel was joking about have been dead for pretty much years now, so we've created some new reels that fill a similar role. Specifically, Mode Y, which applies Doom Delta's wonderful chocolate shader for maximum pixel crunch (thanks DrPySpy!), and Drunked Up, which adds an inebriated sway to your aim.

Of course, there are also some new Slot 1 reels that don't really have a Reelism 1 analogue. Here are a couple of my favorites:

Mirror Mode: Enables Rachael's Flipper mod! Certainly not a perfect flipping by any means (We've had to deal with a lot of issues related to melee view snapping occasionally utterly breaking the player!) but surprisingly effective at disorienting you.

Micro-Mode: Players are shrunk down to toe-size! This is done by directly manipulating their attributes rather then a morph, so they still retain all of their abilities and weapons. It can even stack with My Tank Is Fight, for tiny tanks! And as an added bonus, it also messes with the pitch of your voice.

Some maps have interesting secrets you can only find with Micro-Mode active by sneaking into tiny gaps. Just... make sure you're not in a tiny tunnel or whatever when the round ends, or you'll be sorry. 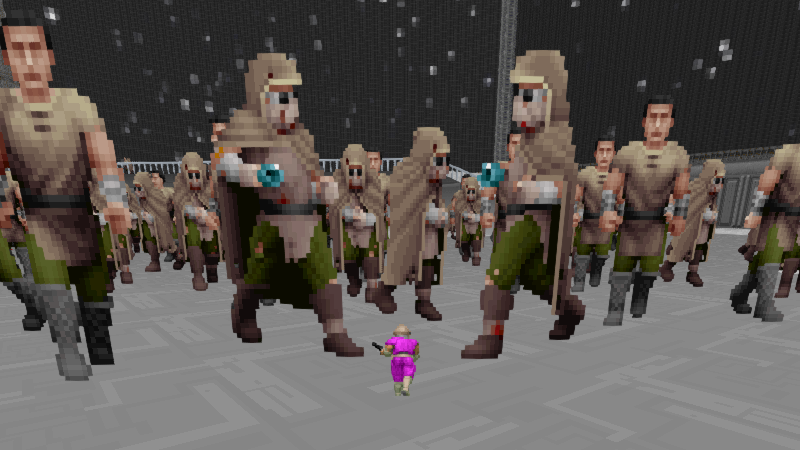 Gun Runner: Every single pick-uppable item in the game, from the biggest gun to the smallest score item, will gain a conscience and a willingness to be free. As such, when you get close to them they'll start running away from you, screaming in terror in the process. This naturally makes getting health and ammo in the middle of combat a bit hairy.

Finally, unrelated, but here's an old friend we completely redid relatively recently. New sprites, new tricks, but still poorly attempting to disguise themselves while hiding from the tax office. I haven't the heart to tell him he isn't fooling anyone, though. 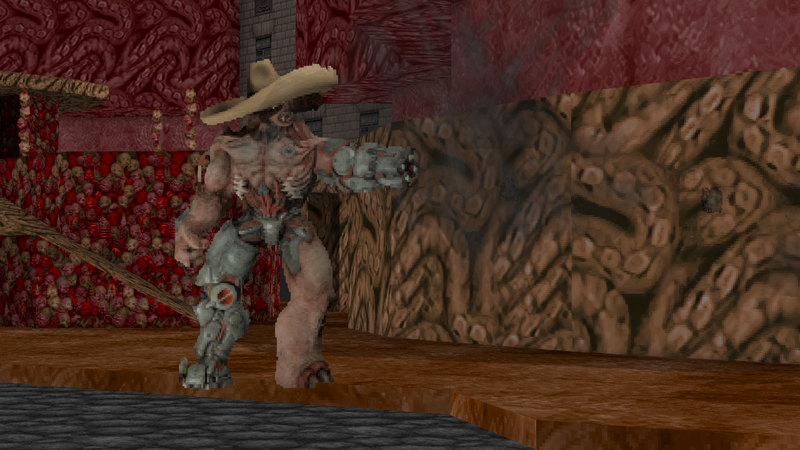 Every day we veer ever so slightly further away from the warmth of God's light and closer to a public release. We're looking forward to sharing this nonsensical bullshit with you, but we've got a few more things to talk about first. So stay tuned!
Last edited by Kinsie on Fri Jun 12, 2020 4:35 am, edited 1 time in total.
Top

Some new changes and new reel stuff are very amusing and impressive. Glad the progress are still being made and it feels like it's gonna come out very soon!
Top

Lots of cool stuff coming by the look of it. I especially like the Gun Runner idea.

Alright, I've been holding off on talking about this for a while. It's a pretty big feature, but up until recently it was mostly implemented as an ugly test map. The new map is taking shape, but it's still a work-in-progress, so please forgive any art bugs, placeholders and general incompleteness in these shots!

Right then, let's talk about Town. 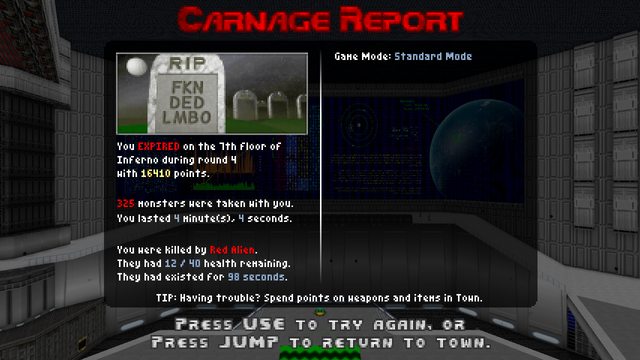 Whenever a match ends, either with your stunning victory or grisly demise, you'll be presented with a choice. Pressing USE is much as you remember it from Reelism 1 - resetting back to a pistol start, zero points, and a fresh RNG waiting around the corner with a bat. Hitting JUMP, however, does something more interesting. 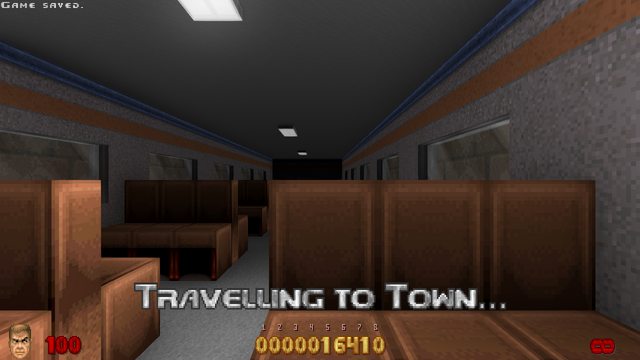 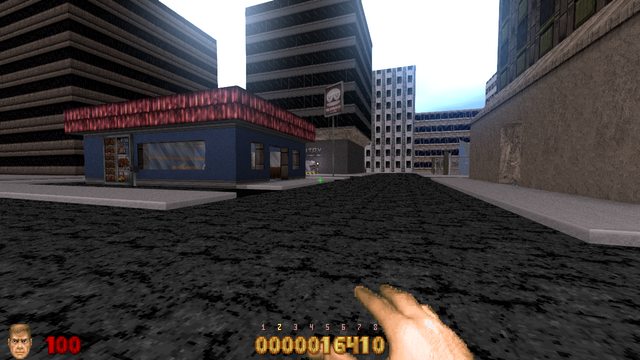 Welcome to Town! This is a central hub map where there's no combat whatsoever. You can't even change weapons or use inventory items! But there's a few other things you can do instead. 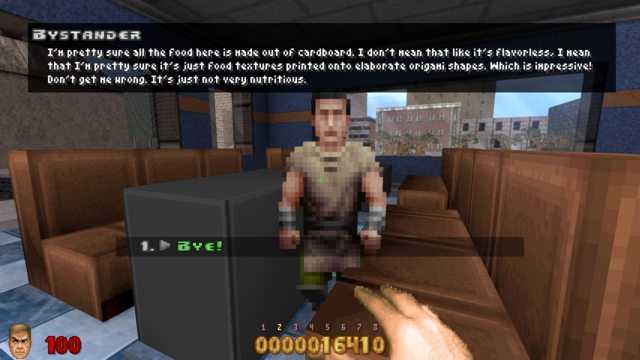 For example, conversing with the local populace. This'll score you some amusing jokes at worst, but at best you'll get a glimpse at the strange, twisted world of the Reelism series. What's all this about "comets" and "zones"? By talking around, you might be able to join a few dots. 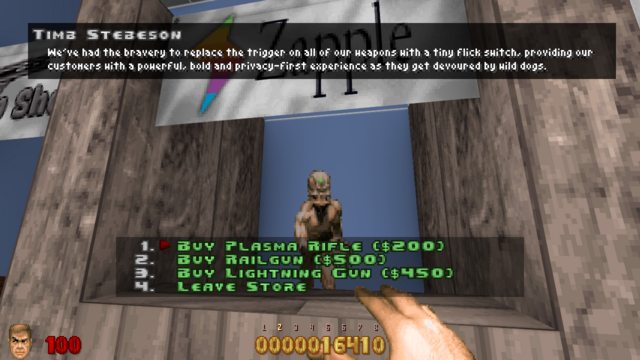 More importantly, you can use your points to buy stuff! There's a marketplace in the center of Town, where you can buy a wide assortment of weapons from most of the weapons reels to take into your next match with you. If you're having trouble achieving victory, bringing a few specific weapons into your next map might give you the edge you need. 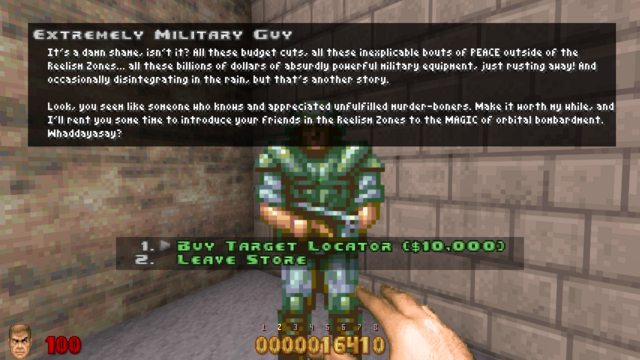 That's not all there is in town, though. Looking down back-alleys and behind buildings can lead you to unscrupulous individuals willing to provide you with Superweapons for the right price. Yep, no more HYPERPOWER reel, you get the biggest and baddest toys through the wonders of illegal arms dealing. You might also find folks willing to sell you other stuff, like powerups, health boosts and even alternate title screens! 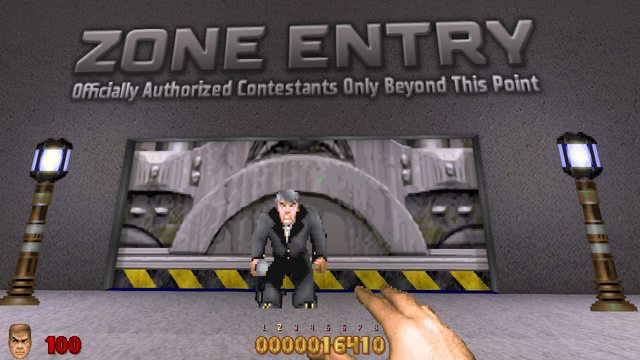 Once you're done, you can sacrifice any remaining points you have (no saving up!) to open the Zone Entry gate, allowing you to take your freshly-purchased goodies onto your next challenge, hopefully helping you get higher scores you can spend on other fun things! Like finding out what's up with the mysterious circus tent near the docks. What could possibly lurk inside...?

Town is a work in progress, and will remain so in the first release of Reelism 2. Future updates will add additional minigames, secrets, and even persistent unlocks to uncover as you rack up high scores and come closer to discovering the secret behind the Reelism Zones. There might even be additional towns to visit in the future, but let's not get ahead of ourselves...

We continue to get closer to a public release, but real-life, our proclivity for feature-creep, and a need to actually play videogames instead of modding them has cause development to slow down. We'll get there though, we're excited and looking forward to having you join us in this strange and wonderful world we've created! 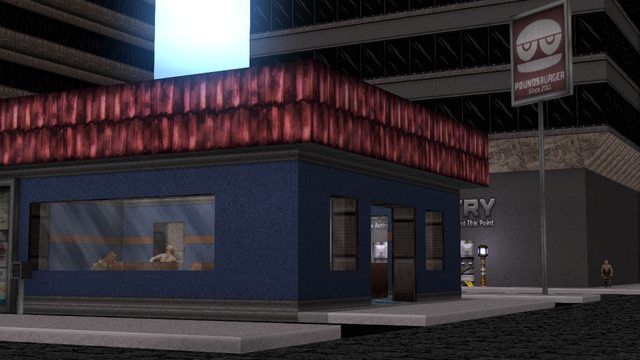 Ahh... The lobby was the first hub in Reelism 1, now it's a town in Reelism 2. I'm looking forward to it!
Top

oh wow this is everything i wanted out of reelism 1 times ten
super pumped for this, the gungeon-esque permanent weapon upgrades & secrets are such a great idea
Top

Absolutely majestic. The dialogue, the map, and the endless possiblities! Now i wonder if we could buy some items before starting the round.
Top
482 posts