MikeyScoots wrote:Bumping because I'm trying to reach you about possibly combining our projects together or figuring something out. Please see my hell unleashed thread and contact me via FB page or on here if possible. TY.

You'd have better luck contacting the guy via PM. No need to shill your project here.
Top

MikeyScoots wrote:Bumping because I'm trying to reach you about possibly combining our projects together or figuring something out. Please see my hell unleashed thread and contact me via FB page or on here if possible. TY.

You'd have better luck contacting the guy via PM. No need to shill your project here.

I cant pm anyone on here, Idk why.
Top

Updated OP with a take on Map 04 - The Focus. I'm really glad you guys are enjoying it so far!


Kills_Alone wrote:I forgot to mention there is something in the wad conflicting with the UDV HUD. When I had UDV loaded my character moved way too fast and could not jump, any idea what could be causing this issue? Happened on both releases I played.

That's odd. There shouldn't be anything in the wad that affects the player class, would you mind sharing what your mod load order was?


dawnbreez wrote:Where did you get all those slick sign/graffiti patches from? Can I borrow them?

Thanks, I made them myself. I'd prefer it if you waited until the project was finished before using any assets from it, but it's not too big of a deal.
Top

And I tried a few alterations such as removing most of the addons and order of a few files. Looking at that shortcut, I now place simplehudaddons.pk3 at the ending. Just updated to a slightly newer version of the UDV HUD (v2.13) but AFAIK it was just to fix the version number, so I'll let you know if I encounter an issue this time. I don't think this has been an issue for me before.

EDIT: Still happening in the new release. This time I tried loading each level manually from the console (map map##). The problem only happens on MAP01.

I like how you have the rox secret switch with the laser. This is amazing how you've merged Builds realism into DOOM.

One issue I encountered is the wall that explodes after acquiring the blue key, it doesn't trigger. Its fine in vanilla. I don't know why this happens but scripts tied to objects like keys don't work in BD, I've been told there might be something I can change in GZDoom's settings but I've never come across such a setting. If I recall correctly it has something to do with key staying or not like in co-op play. I know this isn't really the place to ask but I figured I might as well mention it. For now I can fake it with a line def near the key.

Love it. Looks good so far.

Map-wise, reminds me a similar project from years ago. I can't remember the name of the fellow, but I think he made it to about Map 10, and then we never heard from him again...
Top 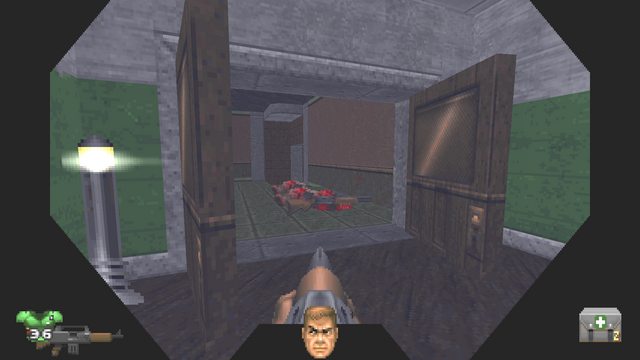 Just got squished by this door.
10/10 emulates Build games perfectly.

Jokes aside, those maps are very impressive and great to play through.
However, the mirrors in the restrooms right to the beginning of MAP02 are indestructible.

Anyone else having trouble loading a saved game? I'm running gzDoom and updated recently and when I try to load a saved game with the Re-Build-t wad, it crashes.
Top

I have just played the first level to check the general quality of this and find myself quite pleased. You can still recognize the old levels, but they are pimped so much everything feels new. Also cool is the idea to connect levels without any loading times.

I'm also definitely getting the Build/Duke vibe from this, supported by colored lighting, explosions and jumping sequences. Once this is finished with music and everything, I'm absolutely signing up for a full playthrough!
Top

Oh man awesome! I was getting kinda scared there that this'd be one of those projects that would be lost to time.
I'm really digging the inclusion of alternate pathways like vents ala the stuff you'd see in Duke3D, and the new shading effects you put in Map01

Spoiler:
In regards to secrets, I couldn't find one of them in Map02, and I was just curious as to if the Invisibility power up is meant to be registered as one? Or are you treating things like that as alternate routes/unmarked secrets? I was also wondering if you're intending pistol starts? Because I couldn't find a RL in Map02 and if you were then I can't see how you'd get breakable wall secret unless you're using NTMAI(which makes complete sense) and use grenade/explosive round you'd get in the backpack.

I just finished the first batch of levels and they were top notch. The way they've been expanded, retextured, and upgraded is really cool. There were lots of moments where it would take me a couple seconds to realize what classic room a remade environment was representing, only because this wad is so good at taking the abstract geometries of Doom's classic levels and turning them into real locations.
Top

great job so far! definitely going to keep an eye on this
Top

I haven't been around the Doom community too long, or played too many custom maps...but holy hell I love this mappack like no other so far, both the combining of levels and also massively expanding them to be their own things entirely is just amazing, plus combining them with NTMAI makes for an amazing combo, keep going, I am incredibly excited to see the next levels!
Top

Very nice mapset. Of course, I played it with NMTAI, and I agree with Enjay. It doesn't feel quite like a build engine game, it's still Doom, but it has a unique style. I didn't encounter any noticeable bugs, but I think some outside areas had too many decorative items (I have a really shitty computer). That said though, I really liked the posters on wall, little things like that. Definetly helps it feel more like a build engine game. I don't know a lot about map design, but if all levels have this quality, I'd give it a solid 4/5.
Top

This is AWESOME. The custom assets really land in that sweet spot between Build engines' "realistic but jokey" feel and Doom's stylized dreaminess. I really hope you make more progress with this project!
Top
88 posts