well the traps in heretic are quite clever. And the level design dont take into account run speed (i think), however design include the "jumping" (run over) function that you need to do in E1M5 , from one building to another. or in the cathedral e1m6 (that tomb was the most brilliant puzzle of my time, i include it in numerous RPG session with my buddy's).
I dont know about the crusher myself when I was a kid, I didnt even now you can run with shift then

, and I always eat the damage to take dragonclaw. Moreover, E1M1 for solid months of playing "Heretic duck-hunting demo" I cannot see corelation between yellow key and first steel gate

, until my cousin show me how to do it.
Top

How are you going to fix that?
Top 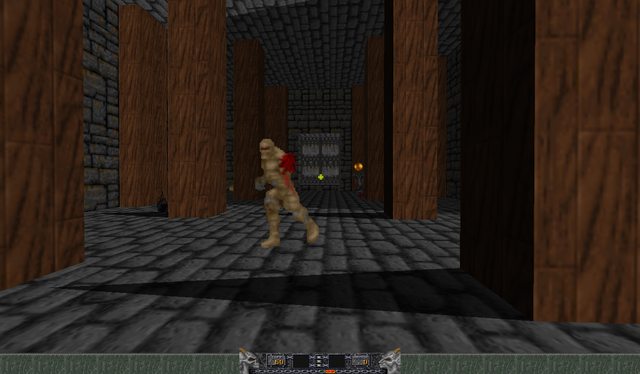 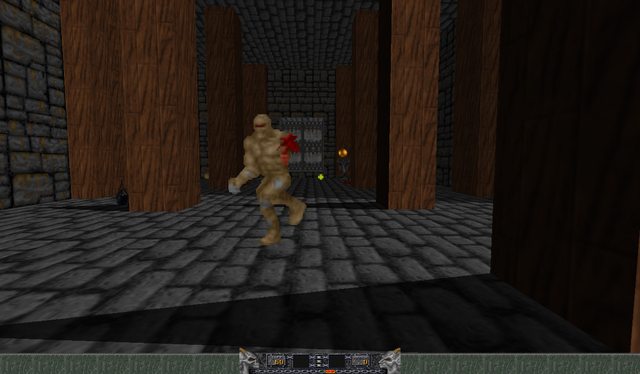 still need some time to adjust ~100 of spirtes position

updated link, if someone want to rip off golem hands by himself


edit:
Ice, new deaths animation, nitro fire, ghosts all take into account missing limb. Old golem death, is now Exploding death, when golem die by excessive amount of damage.
There is only one flaw with new golem sprites - if you set one-arm-golem, on fire, you can see he magically get back his lost arm. Yeah I know Im lazy.

Dude, those golem death animations look really nice! Especially the one where they lose their head
Top

This looks like it would be amazing with Heretic Unabridged, by Beed28. I wonder, is there a quick way to slow down the player a tad? I know it's not the preferred way to play Heretic, but that was a game I always felt would be more fun at a slightly more methodical pace.
Top

I know what you mean. For me running speed (2.0) in heretic (doom) damage a lot of his experience. You dont feel this isolation. Its like car racing game. You feel less bond with Corvus. The combat is simpler. Suddenly you dont have to hide, you can just outrun everything. Heretic was pretty scare game for me when I play it first time.

on the other hand map design require to travel a big distances quite often. Also the puzzle element are scattered from one map end to another. And if you get lost, wandering in empty corridors, would take more time. There is also few traps, but so far AFAIK all (except 2, when you have to press Shift) of them are doable with 1.1 speed.

There is no menu option to adjust speed. And Im not keen to provide one (even if i know how to do it), because that would cause massive temptation to play on maximum speed available - who doesn't play with caps-lock ON all the time?

If you want to change speed in mod file

Spoiler:
You can open Slade, go to file test.acs, find this bit:

and change "forw", to your liking. F.ex. try putting there 0.85.
save file test.acs
right click on the right list on test.acs
go down > Script > complie ACS
save BitterHeretic

there you go, you should move slower (faster) by default. Let me know about your experience

Would this effect the powerups that change speed as well? (Thank you so much for your help!)
Top

Krater of Might adding +0.4 speed
You can change it by modifying value "C" here :

you can also adjust run speed, after you press Shift key

add new monster - Serpent rider -weredragon replace %? either serpent or rider can be kill, and the other is fight along.

new death animation for Sabreclaw. Its mirrored for variety (no worries axe is always in right hand). Top torso is falling down in random direction.
You can also notice his 2x slash combo and tail attack (0:04).

gargoyle - lost wing // skull is blown away from the head. Skin on head is open and skull fly away. / he is cut along the torso on left and right half.
golem - done (head explode, cut in half & arm less wound state)
knight - (head lost wound state), got hit in the pelvis (wheres your lower armor, exhibitionist?!) ether (green stuff) is evaporating from him, and he thrown his last axe (you dont think, he would just "die" dont you?)... maybe I add also Xdeath
wizard - rip off head with the spine / make a hole in the body
sabreclaw - done (cut in half & head lost) add dynamic light to death.
weredragon - split open head, brain fall to the ground/ cut off leg
snake - cut half, the tail is making some movement/ top half of head is cut out (accent on his long tongue)

every monster will have head death, just in case someone figure out how to do headshots. WHOO HOOO - job done, take 1 month


Spoiler:
As soon as 1st frame of monster melee animation start, you can stun with block monster. As you see on video, its hard to execute it without getting hit. So to get out without scratch you need to anticipate when monster will hit you, and block before. Block is sending up to 6 (depend how long you hold block button) stunning projectile from the time the blocking animation is on the peak on your screen.

If you are cornered by multiple monsters than such a long stun time make more sens. 1on1 monsters have no chance for anything (but hey that why we playing doom 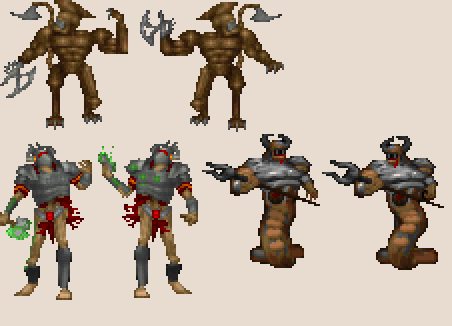 sorry for self bump (honestly I feel terrible),

I notice on mediafire counter, that few* people download my mod since yesterday

maybe You would be interested to redownload for checking new death for Disciples, Gargoyle ? and I fix barrel bug (CTD if you shoot to barrel) 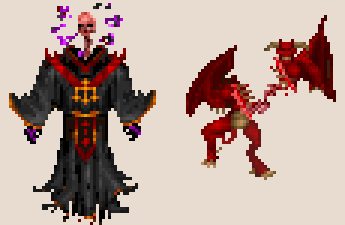 Sadly, the newest version doesn't seem to work in GZDoom devbuild.
Trying to start a new game results in a VM abort below:

ehh... copy-paste of statusbar mod was not enough

can you help me finding newest devbuild?

some beta stuff from here?
https://devbuilds.drdteam.org/gzdoom/
ok, you right, i trying to do smth

edit, ok I make it work (its not uploaded yet): 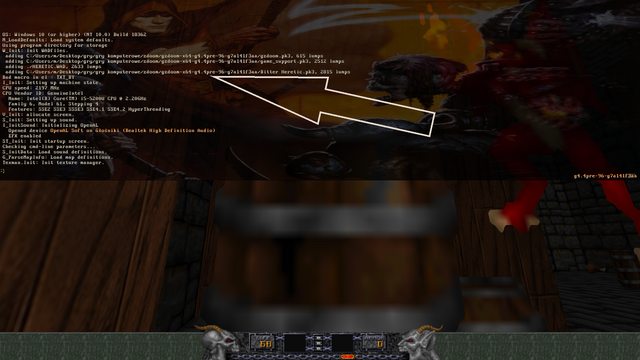