Someonewhoplaysdoom wrote:
Also, how it works the music randomizer for Doom Exp? I want to use them with some map packs from Compendium, that doesn't feature new music. Which one is the order for run the archives.

It's basically the QC:DE music randomizer with different music. I'd say get the latest one from the discord announcement channel. You might need to scroll up a little.
Top

Doom Exp 2.3 will allow you to individually disable the custom monsters and set their spawn chances. The Marauder has been added and will make you wish you encountered a Pyro Demon instead.

Feel free to join our discord server for exclusive info or to share your thoughts and suggestions.
If you are experiencing problems you might get a faster response there as well.

Get it here!
Top

This is great! Many thanks for the update, especially for the monster menu. This keeps getting better and better ^^
Top

Something that's been bothering me for awhile


Why is Glory Killing a separate button? Why not just make it so that hitting a staggered enemy with a melee attack triggers it?
Top

Linz wrote:Something that's been bothering me for awhile


Why is Glory Killing a separate button? Why not just make it so that hitting a staggered enemy with a melee attack triggers it?

I assume you mean the quick melee (Blade). It would slow you down or even force you to do an unwanted glory kill. So they are separated.
Top

Having play this mod since its very first version and little by little resembles the gameplay mechanics of the latest DOOM games more and more and now it has the Marauder, welp this gonna be my training before the real deal, cheers for the update!
Top

So I finally made an account just to post my feedback on this mod, because it is one of, if not the best, gameplay mods ever made, and I have played A LOT of Doom mods. There are a couple of things that I think would really improve the mod-
1. While I really like the minibosses, and feel that they should be especially hard, even on high rates they should be limited to not showing up in groups. Fighting three flying arachno-dicks is misery incarnate. Alternatively, fighting multiple different minibosses at once can be a lot of fun, so if we could configure each MB's rarity instead of turning them off/on, I think that would be best.

2. I really like the Maruader, hes way harder than he is in eternal but IMO he should be harder. However, the fact that he drops shield just to raise it immediately after, sucks all of the ass imaginable. Also, a single energy blade is a one hit kill at max health and armor, and sliding under it works only if he doesn't immediately fire off a second one. That plus the dogs behavior makes me feel like you've "over rendered" him as I thought. A slight damage nerf to his argent slash and a small cool down on his shield would do wonders.

3. Universally, I feel like monsters should do more damage and have less health at max level. without crucible or chainsaw, once the monsters reach max level, it can take upwards of five minutes to kill a marauder. cutting the monsters down can feel like a real chore, especially on maps where the higher ranking demons are much more common.

Thats pretty much it, the last thing that I think would be neat is a configurable "Demon Classism" mode, this idea came to me when I noticed naked revenants and their armored counterparts in-fighting. I love the idea of higher ranking demons turning on their soldiers more frequently, similar to how the arch-vile switches agro instantly. As of right now it seems that the arachnorbs or whatever those asshole flying brains are called don't fight back when targeted by Caco's which is a shame because it would add a bit more strategy to taking on minibosses.

Anyway thats all, keep up the good work, the mod rules!
Top

That's a bold statement but I'm glad you like it. There have been more updates already on the Discord dev build.
Thank you for the feedback!

Oh wow! After a little play testing I feel like these changes have really improved the experience, especially with the maruader, he is now much more fun to fight. I just did a playthrough of doom 2 with this mod but now Im gonna play through maps of chaos, too!

One thing I might add, though, this time my play testing was on back to saturn, and unfortunately that wad has a lot of invisible walls making it impossible to get some power nodes that drop behind them. Would it be possible to make the pickup magnet work with PN's? and if so, could they go through certain wall types like projectiles? Just an idea, since its not a problem with the base game, and I don't know how many wads would benefit from the change.

Thanks for amazing Dev build, I love the new sprites!
Top

I could make the Power Nodes work with the pick up magnet. But it doesn't happen often that they are dropped in unreachable places and there are so many other ways to get Power Nodes. I don't think it's a big problem. Leveling up, getting the 100% bonus, finding Power Node containers and killing 5 mini bosses should give the player enough. You also have the Power Node giver option in the settings, if you feel you're not getting enough. The random drops from smaller monsters are somewhat rare and not meant to be the main income source for Power Nodes. The pick up magnet makes sense for the health/ammo/armor orbs, since they will fade away after a short amount of time but Power Nodes last forever.

I get the same thing happening to me too. And I cry when my Power Nodes are trapped inside a closed area. But you have to stay strong and move on.

So is it really a big problem or are you just sad like me when it happens? I think it's fine tbh.
Top

Just a little question, how do i get the announcer that is in doom exp in vanilla
Top 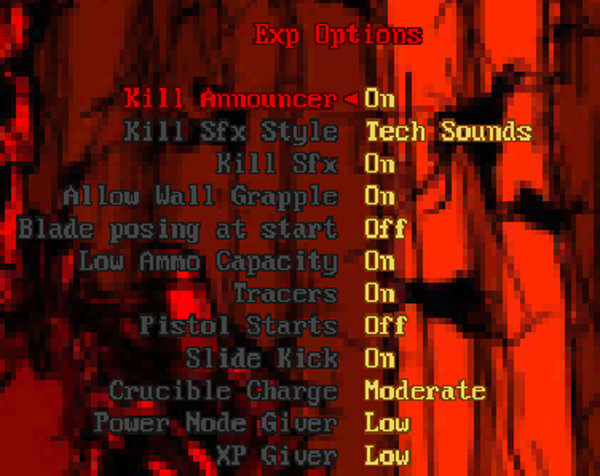 After trying Doom Exp, I must say it's really good!

I really liked the Fists alt fire, "Fuck you" stunning the monsters and giving extra exp! loved that! haha

Would be awesome if there was a hotkey option for the "fuck you" fist altfire so you could flip off a monster while equiping a weapon and shoot it right after!

The chaingun shooting really slow in the beginning kinda ruins it, would have been much more useful if it fired fast right away instead in my opinion.

One thing I really missed was Throwing Grenades. I think throwing grenades with a quick throw hotkey would be awesome! I'm thinking of Johnny Doom, in that mod the grenades are just perfect, maybe you could copy that.

Reaching level limit at Rank 21 felt a bit dissapointing, I wish you could continue to level to Rank50 or something because you reach max level pretty fast. By level 10 on Maps of Chaos Overkill I was Rank21 with 100.000Exp.
Top
142 posts