How's the progress on the pig?
Top

Barely started a rotation, really. Just too much work. Class and work kinda suck up all my energy! I really want to come back to this, however.


Spoiler: some pig sketches for a future mod, if anyone wants to see
https://i.imgur.com/FRGZcYd.png

Glad you enjoyed it. It does miss a "missing hit" sound, but that's because the sound file is in another file of mine, so I forgot to add the before I uploaded this.

The gore sound of the arm sprouting out is from Doom 2016 and the "voice" lines come from these buggers: https://youtu.be/360uNK2lpUI?t=3182

Also, i don't know if this is true or not, but if you used my creature a mod? I can't remember the name to save my life, sorry, i'm forgetful

(a friend had told me about it)
But thanks!!! It's great to see my stuff getting some love

Hello, I'm developing a survival horror mod (link : https://www.moddb.com/mods/litdoom-survival-gameplay).
I was wondering if I could use some of your monsters in it once they're finished, especially the "mimic" one. Of course you'll be credited for your great work! We're also looking for more sprite artists for when the monster overhaul will be done (for now we're focusing on weapons)
Top

Sure you can use 'em, just credit and it's all great! I'd be glad to it in the mod later, hahaha
For now i'm absolutely busy so no working in projects, however be free to use anything i put out here in case i get the chance to work on these some more.
Top

Some code which uses sprites from here
viewtopic.php?f=37&t=66132
Top

Long time no see!
Pigman's finished, mostly. Still needs an XDeath animation, but apart from that it's completely done. I'm apprehensive about posting it- it's gonna be the main character of a project i want to do way down the line. However, if you wanna use it in something, *ask me!*. I mean, really, i just do it like this to more or less control how much it of it's out there, for now at least, hahahaha.

What i can leave for now is an Armored Grin! Why? I don't know! I did it as a temporary skin for a mod which actually used the monster, so i needed to differentiate. The thing was never really used, sadly, but the sprites are still here. Check em out! 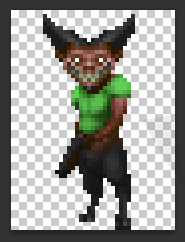 I made it in a few hours so it ain't the most polished thing up here, but hey, it's a variation! No laughing frames for it for now, though.
Still waiting for that ever escaping Free Time With Some Inspiration to continue working on my sprites and mod. It's complicated when class and work have you drawing and coding. Mostly end up using the free time to play games. Gotta rest somehow, huh?
Top

Very nice work Stopsignal, as usual... Keep it up!

By the way, I'm thinking about including that Armored Grin monster on my next HXRTC mod update, as a stronger version of the called 'Joker Imp' but carrying a laser weapon-type instead of a shotgun, hehehe...

EDIT: Thought and done! Next release of my mod definitely will include it, along with some other nightmarish enemies...

Hey, thanks dude!! Gotta check it when i can!

Here, a joke that got too far!
https://drive.google.com/file/d/1bwmnxY ... sp=sharing
Top

I just came across the Grin and the Chubbs on Realm667 while looking for demonic replacements to former human enemies. While I ultimately decided not to use them, as their superior animations and AI clash too much with the vanilla bestiary, I think they are amazing and I hope to see them featured in total conversions!

Hey, thank you so much!!!
Yeah, the chubbs specially, hahahaha. IMO if you choose up some of their frames they work quite well (I do think the Grin, without the laugh animation, works perfectly! it's just taking it away in the Decorate, so it's an easy change)
The chubbs is kind of a lost cause though, as I needed 6 frames for the hoppity walk to be clear, hahaha
The firing frames can be chopped too, though!

I hope so too! Some weeks ago I played a mapset which had the grin, it made me so happy, hahahah
Good luck with your works!
Top

Stopsignal wrote:Hey, thank you so much!!!
Yeah, the chubbs specially, hahahaha. IMO if you choose up some of their frames they work quite well (I do think the Grin, without the laugh animation, works perfectly! it's just taking it away in the Decorate, so it's an easy change)
The chubbs is kind of a lost cause though, as I needed 6 frames for the hoppity walk to be clear, hahaha
The firing frames can be chopped too, though!

Oh no, do not do that! The animation is great as it is; if anything, it is the other monsters that need to be replaced with equally well-animated creatures!

How's the work on the pigman skin and hudface going? If it is finished may i have it for personal use only? I am currently playing through doom 2 with a personally edited VDP monster randomiser and cc chaos+pb's health system's code in a special pk3 where i extracted it.
Top
73 posts