That Arbutor thing is so sick!! One of the coolest enemies I've ever seen. Will be following your stuff carefully and hope you'll be making them available when you're done because this stuff needs to be in some maps.
Top

Now, take all the time you need, no need to rush something so great.

Take care with yourself out there.

Thanks! Don't worry, slowly going along


EddieMann wrote:Something reminded me to ask you "didja make the horned impy into a fully-fledged skin yet?" Also gosh, i'm head-over-heels ENAMORED with your lively, expressive spritework!


SiMpLeToNiUm wrote:That Arbutor thing is so sick!! One of the coolest enemies I've ever seen. Will be following your stuff carefully and hope you'll be making them available when you're done because this stuff needs to be in some maps.

I hope people like it enough to use it! Gonna personally use it myself anyways, hahahah

Anyways!
I suddenly fell in love with pigs. I love their faces, their noises, the fact that they are horribly weird yet look mildly cute in a way. Reminds me of the stuff i like to draw!

Say welcome to the PigMan. Most possibly a playerskin that's gonna be drawn after the Abutor. Or maybe after the Red Monkey, another creature i want to draw. Hm! 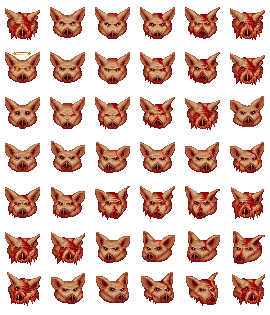 Wow, this one... This is perfect for an in-game jumpscare!!! Hehehe...

Awaiting also for the finished Abutor character! It's gonna be a pretty magnifique big-boss for one of my mods... Keep it up man!

Exactly! I want to finish it some day (would only be one rotation, to make it simple, it's a mix of meat parts and things after all) but not for now. Would probably do it in a day, though.

That one's coming along slowly!

But surely. Lunge attack frames, still needs some for after the attack has been done.
Top

The mimic would fit in perfectly with a mod based on John Carpenter's The Thing.
Top

Also figured i'd share this! It's a few months old, but i loved doing it. Maybe i finish it some day! It would only have one rotation though. Kind of a one-shot scare, but pretty interesting one.

Coincidentally, I just finished watching both the 1982 and 2011 "The Thing" movies back-to-back. John Carpenter's still better but I enjoyed the efforts from the 2011 people to tie theirs to his.

Anyway, both this and the Abutor would fit perfectly in my Hunted project (which has a mimic enemy but custom sprites are always nicer), so I'm really looking forward to seeing the finished products. This is high quality stuff!
Top

I really need to get on that guy some of these days, looks like a bunch of you like it

Sure! Again, it'd only have one rotation. Should be simple.

Continuing really slowly on the Abutor. I just got tired of animating, that's all. Gonna continue soon!

(still needs a few tweaks, make him hang longer with the arm stretched out, animating the meat strings, etc)


For now i have started on the Pigman.

He's just an angry, tired but determined creature. Mixture of doomguy, demon legs and a pig head. I don't know really what i was thinking when i came up with the concept but i like it visually. I really like pigs. It's this disgusting flesh creature that is associated with repulsion and weird noises. Also with prosperity, so yeah.

He's bleeding from the stomach. This is because of the concept of the main gun of the mod: A Meat Shotgun. Run out of ammo? That's fine: you can always use your own flesh.

Tindalo Dogs.
Just small pest enemies that would be really really fast and lunge at you.
Based their design originally on this guy:

Does someone know from what painting is it from? I totally lost it.

Slave
Tall, slow (actually, normal speed, but slow for the mod) creatures that throw blood projectiles in a shotgun patter by squeezing their guts which everyone tells me look like a big dick so i should probably change the design somewhat. Tho it kinda adds to the weirdness of it, so who knows! I really like this design. Also the colours are whack, needs a complete recolor.

Red Angel
Will probably behave just like really aggressive imps. Will have a flying variant. May change between the two at will, haven't decided that yet. I did it for a tutorial on this forum which i don't think i have shared in this thread yet? Hm. Need to continue that thing too.

Slowly but surely doing stuff! Did these designs as a rest from animation, but may continue soon. It's so close, i don't know why i am not doing it. The same happened with the Chubbs monster! Just gimme time, hahaha
Top

Stopsignal wrote:Does someone know from what painting is it from? I totally lost it.

The Fall of the Rebel Angels by Pieter Bruegel The Elder

It's about half way down on the left of the painting.
Top

Stopsignal wrote:Does someone know from what painting is it from? I totally lost it.

The Fall of the Rebel Angels by Pieter Bruegel The Elder

It's about half way down on the left of the painting.

Thank you so so much! I remember loving that painting and the creatures it has. It's like an adrenaline shot for my creativity. Yessss.
Top

YES THAT IS FANTASTIC. YES. Oh man, you made my day right there, hahahahaha
Also I absolutely did not expect the second part. You got me there.
This really inspired me, gotta say. Gonna continue with him a bit today, hahahahah
man, really, this is fantastic
Top

Because i got inspired, hahahaha.

Only one rotation, of course. Of anyone wants to do other rotations go ahead, but honestly being a jumpscare monster i don't feel it needs anything more. It's just a mess of limbs anyways. Hope you like it!

Also, i gave some pain frames to use, but IMO it should not have much painchance and should just rush you really really fast, as it would be hilarious. Do whatever you want with it, tho!

Aaaand also added this guy to the list of stuff. Only one frame.

Stopsignal wrote:Aaaand also added this guy to the list of stuff. Only one frame.

Haha, nice. Are you planning on completing it later?
Top

With only three attack frames it looks a little bit off.
Top
73 posts