Umm there is two version on the Pyro succubus edit

One is the Censored and Two... the uncensored one
Can you make a uncensored one? But spoliers alert
Last edited by TaporGaming on Fri Dec 13, 2019 7:28 am, edited 1 time in total.
Top

Those edits look much better!
Top

Thanks guys!!! And yeah, of course i'll make an uncensored version. Imo two pixels in a tiny pixelart aren't all that wowsies, not even titillating, but gotta be careful, nsfw is still nsfw
Not gonna post it till it's complete tho. 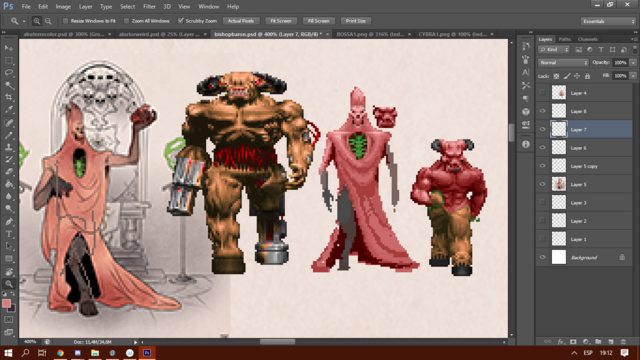 Some work in progress of this https://www.deviantart.com/deimos-remus ... -680069901 guy i found in a thread in doomworld! I really like it, and i'll probably finish the base sprite at some point, though i'm not sure i'll make any full spritesets of this guy at all.

Also a cleaned up sprite of the Succubus as it had some big lighting issues i didn't even see when my tired ass was drawing it. So, there it is! More hips, rejoice.

Should probably stop fooling around and continue with the Abutor. Here is a concept drawing of him because i was bored: 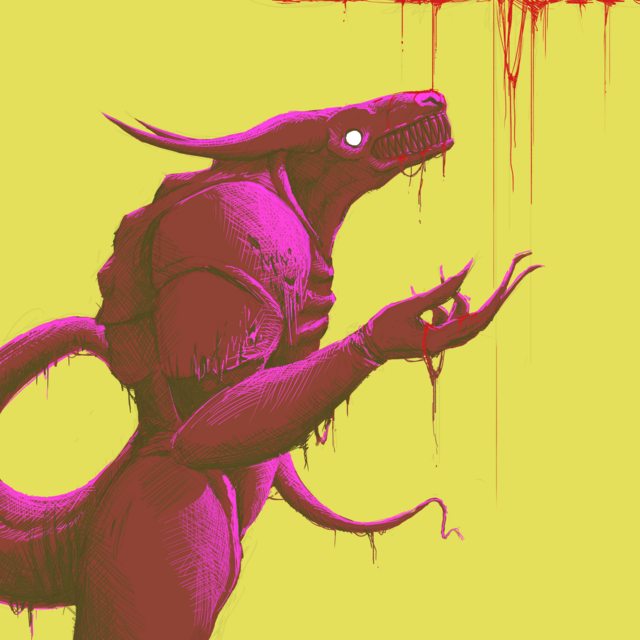 Also updated the Imp quite a bit. I'm really tired right now but i'll edit the links here accordingly later! And possibly some other details.

Small snorting imps that shoot a barrage of fireballs to anything they don't like. Easy to kill, but hard to hit due to their size, they will pester you from afar without stopping. Prioritize and snipe unless you are good evading fast projectiles.
Could be used as a projectile based alternative to the Chaingunner.


Update to the Horned Imp:

-New Hurt frames, so it shows the damage feedback better.
-Completely reworked code. Less spaghetti, easier to edit.
-It has less life, its painchance is now 100% so you actually can stop it from running away with the chaingun, and puts less mines, more consistently, which deal less damage. It also runs away less before stopping. Doesn't shoot while running anymore.
.Changed the name to Grin

EDIT: Added some old work too, the Barona and the Fimp. Old requests, based them on the HDoom sprites. Not the proudest legacy IMO but apart from the faces those are really, really good sprites. Really like how the Barona turned out, not so much with the Imp. Also i wanted her nipples brown to complement the skin but the requester said to just leave it like that!

Barona
Based on Hdoom's sprites. Just changed the face. Warning: No rotations on the attack.

Fimp
Based on Hdoom's sprites again. Used the Hellion's face. I put her here to archive, as i'm pretty sure there are way better female imp sprites out there.

One day i'll make the images animated so it's cooler to see.
Top

Hey, thanks a lot! I always complained about Too Many Barons so i guess i had to, hahahaha
Not saying anything to other artists though, it really is a daunting task if you think about the number of images and stuff.
Happy new year, buddy!

In case anyone wants to see progress,i have been stuck for a while trying the lighting in the Abutor's back and its killing me, so i let it rest for a while, but i'll probably work some time on it today.

Rotations look great, I think you've made the work a bit harder for yourself by having those asymetrical arms on him though, can't mirror him as easily.
Top

BoJustBo wrote:Rotations look great, I think you've made the work a bit harder for yourself by having those asymetrical arms on him though, can't mirror him as easily.

Just realized you are the person that is doing the pixelart thread in doomworld! Your art is great, keep it up! Love to check that thread every once in a while.

Gotta be honest: For now i don't know if i'll do them (the other rotations). It doesn't bother me personally, but i do intend to use these sprites for something one day, and then i'll indeed to the other rotations. But for now, like this it stays! Just mirrored sprites.

There are a few errors there in that image i already touched up (some lighting errors and lone pixels), as i just started animating the rotations! Maybe if i put some effort i can have him finished relatively soon. Let's only hope!
Top

That thing looks horrible. And I mean that in the best possible way.

It's so good to to see someone working on new enemy sprites. New weapons appear all the time but full actors (understandably) are a much rarer thing. Good work.

Thanks!! It really is quite a workload, can't lie, but really rewarding in and of itself, so i'd encourage everyone to try!

Started animating it. Still not sure if this will be the final animation. (It's some kind of archvile like attack) Obviously not finished, it has to have some kind of chargeup and hand explosion, but at the same time i want the first frames of the animation to have some kind of effect to make it really obvious it has started to charge up, so i just started with the middle to see how i'd go from there!

Also figured i'd share this! It's a few months old, but i loved doing it. Maybe i finish it some day! It would only have one rotation though. Kind of a one-shot scare, but pretty interesting one.
Top

Awesome stuff. The Abutor lifting it's fingers is so eerie, it's like "Oh, god why is it counting?!"

You definitely have quite the artistic talent, it's nice to see some good original stuff out there. Kind of wish I stuck with practicing to draw more when I was younger, maybe I should get back into it.
Top

But I absolutely adore the design of the Abutor!
It's one of the creepiest monsters I've seen so far and I love it!
Makes me wish to encounter one in real life, even if it will cost me my soul

Like Xim said above, you have quite the artistic talent.
I'll definitely look forwards to seeing the Abutor finished

I love seeing the word eerie, as it's something i'm a little bit trying to get to with this guy! Thanks, you both! Also, i'm of the opinion that as long as you start drawing and don't stop, you can always end up really good at it.

Also i'd totally like to see one too, actually, hahahah
Maybe one day i'll get all these creatures 3D modeled, if i can! If only one could live forever to have time for everything, man.

Spoiler: wall of text about it
Basically a mockup of how the animation would end up. As you can see, parts are badly drawn or missing: this is basically an sneak peek at my animation process. First you gotta have the motion down, before even starting to draw all the sprites. Get the movement right, and then start adding detail and fixing. It's all about feel.

Doing something experimental with the head motion there. I'll probably change it to be way less exaggerated (as in, barely moving the head's angle rather than making it flip out), looking at it now. I want to add some of those to a few of the animations, and a random chance for it to play in the idle frames too, and the walking ones. Could be really good, could look really lame. I'll have to see how it goes, i guess! In any case, it'd be really easy to take out if you'd be using it for a mod or a custom creature.

(thinking about it, i might do a tutorial of how i do sprites one day, for now if you are interested maybe the badly edited progress videos can help somewhat, but it's not ideal)

As you see, i'm going really really slowly. Lot's of stuff happening and work and beer to drink don't leave me much drawing time, however i absolutely am finishing this before i get back to class. That's a promise to myself, there.

Now to do the Idle, the Walk, the two melee attacks and the Raise. Raise would be kinda based of this one and the attacks would look kind of the same except for the timing and effects, so it won't be THAT much work.
Last edited by Stopsignal on Sat Jan 18, 2020 6:25 pm, edited 1 time in total.
Top

Oh boy, this head twitch looks so creepy and niceeeee.

Now, take all the time you need, no need to rush something so great.

Take care with yourself out there.
Top

Something reminded me to ask you "didja make the horned impy into a fully-fledged skin yet?" Also gosh, i'm head-over-heels ENAMORED with your lively, expressive spritework!
Top
73 posts