Cyanide wrote:If you're still having problems with the baron, mancibus, arachnotron, mastermind ander cyberdemon spawners breaking maps, you're welcome to take a look at the code in Shades of Doom.

As you already know because I sent you a private message. I am so thankful for this.
Not only because it might solve the biggest problem I've had with this mod. Even though I have a working temporary solution for it.
Also because I didn't know about Shades of Doom before.
I've explored and played it quite a bit this week. It is so well done and polished, and such a cool take on a monster randomizer!
Looking forward to do full playthroughs using it!

I've been getting back to Doom lately. Playing more and more everyday. Doom is too much fun!
So I'll probably continue updating this mod soon as well.
December is pretty busy month for me, but I'll be adding some stuff and doing some tweaks to the mod soon.

I have a question for anyone reading this.
As English is not my language. That "Demon/Spectre/Lost Soul replacer which have long range attacks..." part could probably be worded a little better?: 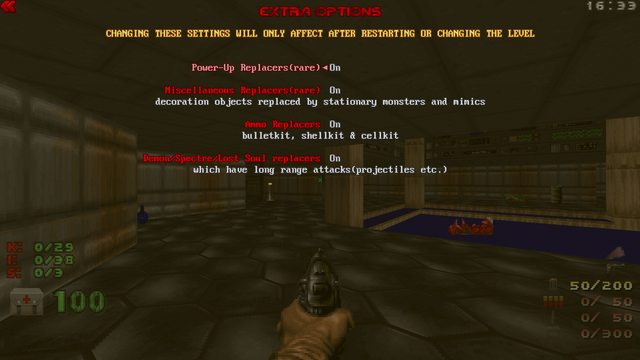 It's pretty self explanatory either way. By the way, there's a guy uploading videos with this mod if you want to check them out. https://www.youtube.com/playlist?list=P ... cF1DdgInoR
Top

Rowsol wrote:It's pretty self explanatory either way. By the way, there's a guy uploading videos with this mod if you want to check them out. https://www.youtube.com/playlist?list=P ... cF1DdgInoR

Thank you Rowsol! It's definitely interesting for me to see someone else play with it. I will check them.
Top


-25 Added monsters(total is about 250 now)
All the new ones are in the video update.

-Added GLDEFS:
They we're all missing before because i never added them.
Now all the GLDEFS that came with the monsters have been added.
I also added them for some monsters that didn't come with them(by using already existing lights from other monsters). I'm planning to add more in future updates.

-New/improved settings and features:
-Disable shooting by Demon/Spectre/Lost Soul replacers
Instead of stopping those replacers from spawning completely.
Now you can disable just those attacks from them.
When shooting is disabled some of them might get little faster, or do a new attack instead.
It's disabled by default now for better balance.
-Monster Mixer
Intended for DOOM/ULTIMATE DOOM.
These will be added on top of their original replacers.
You can have Chaingunguy replacers(reduced health, will drop a shotgun on death) for Shotgunguy.
Pain Elemental replacers(reduced health, most should not infight with Cacodemon or it's replacers) for Cacodemon.
And Hell Knight replacers(double health) for Baron of Hell.
Turn them ON for better monster variety(over 40 more in total)!
Keep them OFF for better balance.
Not recommended in DOOM II/FINAL DOOM.
-Choose what Pain Elementals spawn
Lost Souls ONLY
Lost Souls + Replacers
-Alternate blood colors
Lost Soul = no blood
Cacodemon = blue
Hell Knight/Baron of Hell = green
Nothing new... But if you want them you would need a mod anyway.
So why not.

-A lot of nerfs/buffs for so many monsters:
For example Revenant replacers should be a lot more dangerous now.
Some Archvile replacers that couldn't resurrect enemies before, now can.
Few examples in the video update.

-A lot of fixes:
Few examples in the video update.

-I tweaked some spawn chances of different Imp replacers
Something I already did for January 20th update.
But after I released it, I did little more testing and wasn't completely happy with it.
Small change, but it feels a lot better now.

-Baron replacer: ShadowBeast(at 3:55 in the january 20th video update)
I limited that fake death thing(the one that spawns the ghosts) which it does sometimes when taking damage, so it can only happen 2 times max.
It rarely happened 3 times anyway. But when it did happen, it felt like it was too much for such a short encounter. I actually really like that attack!

-Imp replacer: Catharsi(the one that spawns a bomb on death that shoots out fireballs after few beep sounds)
I added a faster and slower versions of the bomb. Original bomb still spawns 75% of the time.

-2 Hellknight replacers that wields a shield: Hellwarrior and ImpWarlord
I decreased the chance for them to block after taking damage.
So I could raise their health a little bit to be better as hellknight replacers(or baron when using monster mixer).

Yeah, that's a cool one for sure. The visual effect is so different from everything else.
It's from Devil Worms Pack, which was suggested to me by YasuoProjectX.
I only added "TeenWorm" from 4 different ones available. For now at least.
Top

Just found out that VDP doesn't work with Russian Overkill due to what seems to be sprite conflict issues.

EDIT: You should probably add the ISMONSTER and COUNTKILL flag to decoration transformed monsters. Mods that use the flag like Keymaster and War Trophies among other things (maybe Legendoom and Champions and such?) use the flag to detect which entities are monsters and act accordingly.
Top

Someone64 wrote:Just found out that VDP doesn't work with Russian Overkill due to what seems to be sprite conflict issues.

EDIT: You should probably add the ISMONSTER and COUNTKILL flag to decoration transformed monsters. Mods that use the flag like Keymaster and War Trophies among other things (maybe Legendoom and Champions and such?) use the flag to detect which entities are monsters and act accordingly.


Thank you for this info Someone64!

I posted a small update today, but I didn't see this until now. I'll look into that soon!
Top

I renamed the CUBE sprite so it should work now.
"Attempt to get invalid state Death from actor Actor." message came even withouth VDP. And I checked the monsters that can replace decoration objects. They already had the "Monster" flag combo which includes ISMONSTER and COUNTKILL.
Don't know how well this mod works with Russian Overkill overall. But it does start and seemed to work fine.

The link is updated even though is still says UPDATED 22nd.

Other small changes(January 25th):
-I also fixed a sprite issue with PyroImp. There was a wrong explosion sprite at the very end.. and looked weird.

EDIT: Allow me to confess to a bit of a case of PEBCAK here, it was a load order issue. Swapping the monster mod to load before the weapon mod did the trick on the ammo problem.
Top

openroadracer wrote:EDIT: Allow me to confess to a bit of a case of PEBCAK here, it was a load order issue. Swapping the monster mod to load before the weapon mod did the trick on the ammo problem.

That's generally the recommended load order for monster mods and weapons, likewise maps are generally recommended to go before both unless stated otherwise (Like with Obaddon maps).
Top

This mod doesn't seem to want to work with certain weapon/gameplay mods like Embers of Armageddon or Highway Acceleroid Booster, even in the correct load order.
Top

This is perhaps the best monster randomization mod that is out there. Impressive scope, decent balance and good amount of options.

That said, if I can put something of the wishlist of new features, I wish there were some toggles to enable/disable themes of monsters. With this I mean, there are already enough amount of monsters that you could classify it in three types, 'sci-fi', 'fantasy' and 'neutral', and the player would be able to enable/disable each to add their monsters to the random pool.
The whole idea here is to have the option of being able to play fantasy-looking maps with only fantasy appropriate monsters, as if the mappers would have included the custom enemies by hand, and play the most sci-fi looking monsters without warlocks or gargoyles flying around.
Top

Nicely randomized, with tons of enemies to deal with. Tho i love some different type of enemies with extra change, but it seems them in the same replacement actually fight each other if they get a friendly fire. I tested on a few replacements like Baron of Hell, Cacodemon, Revenant, Mancubus and Hell Knight. They fought each other.

For some reason, Arachnotron and Arch-Vile replacements did not.
Top
119 posts