fair enough.though this might be off-topic,i was looking for a few mods/mutators for classic versions of brutal doom(bd17,bd18 & bd19).i wonder if u or anyone have them ? again apologies if i'm going against rules by requesting as such; i'm new here.
Top

@m8f : thanks 4 d respons & as such i have requested about the mods/addons/mutators in appropriate places at zdoom.just pray for me that i find the stuff i'm lookin for considering how old they are.
Top

I just remembered something: In Doom 3, the crosshair changed color upon a successful hit on your target. Would it be possible to either implement something like this or hitmarkers that move along with the Precise Crosshair?
Top

Yes, it's possible. Added an issue. Sadly, I tried to add Precise Crosshair support to HitMarkers by Tekish, but it didn't work. At first, the hitmarker appears at the correct position around the precise crosshair, but then it doesn't follow the precise crosshair, because the hitmarker is drawn via ACS and cannot change its position once printed.
Top

Hey m8f, thanks again for your wonderful QoL mods

I wanted to ask - in CrispyDoom and PRBoom+ you have the option of making the crosshair change colors when it goes over an enemy. Precise Crosshair+TargetSpy's integration already changes color based on the targeted enemy's health, but I was wondering - would you consider adding an option to have it behave like Crispy/PRB, and have it only be 2 colors (No target - Target)? I feel it could be very useful, specially when playing Vanilla with autoaim and no mouselook
Top

Yeah that'll do the trick! Although Precise Crosshair+Target Spy integration already does this, no? The only thing that would change is that enemies at 100% health would turn the crosshair green instead of keeping it white.

That's why I felt that Precise Crosshair being binary only (yes target - red, no target - white) could be useful on its own. If you want the extra health functionality, loading Target Spy and activating its crosshair module could color the crosshair based on enemy health. But that's just me rambling, it's your mod after all, so it's up to you how you'd like to do it

I apologize if this is a dumb question, but how do you allow each weapon to have a different crosshair like in the preview video? I'm using this mod along with Zagemod, and each weapon shares the same crosshair, and I have no idea how the heck you did that. I saw someone mention on page 1 that they have the weapons set to each have a different crosshair, but as far as I can tell, that option does not exist.
Top

Try loading without Xcrosshairs. Zagemod already contains custom crosshairs, and they are set individually for each weapon. Also, find "Force default crosshair" option in GZDoom HUD Options and make sure it's Off.
Top

Thank you very much, that worked great. I'm not sure how I screwed that up, but I appreciate the help. I wish there was a universal mod that allowed you to pick an individual crosshair per weapon. This is a great mod though, and I agree it should be added by default to the engine.
Top

to "Select" state for the weapon (replace 9 with the number of crosshair you want).
For example, here is the crosshair setup for a pistol in Zagemod: 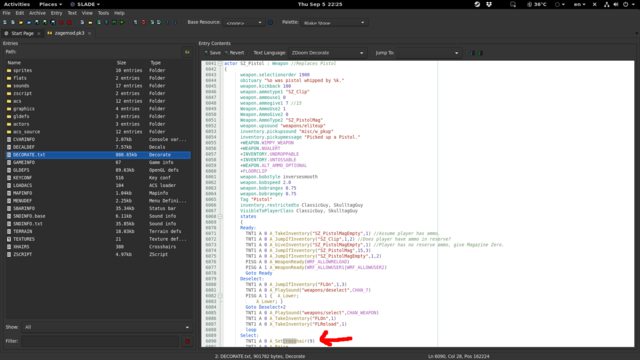 That's awesome man, thank you very much for sharing that. I tested it right after I read your post and it worked like a charm. I'm not gonna lie though, if it was possible, it would be nice to have a mod that allowed you to do this within the engine, that way you could load any weapon pack mod with it, and then set up each weapon individually on the fly. Either that or at least the ability to set one crosshair per weapon slot, because 2 is usually a pistol, 3 is usually a shotgun, and so on. As with most of my suggestion, it's not needed necessarily, but it would be pretty dang cool. Regardless, thank you again for sharing that quick guide, because it really isn't hard like you said, and completely within my capabilities. Much appreciated.

Off topic:
I must be on a dumb streak lately, but I just realized you're also the person who created the laser sight mod. Dude, thank you for that as well, and for the rest of the toolbox which is literally 90% of my default setup. Each of your mods is pretty much a necessity at this point for me. That said, I've seen in other mods that utilize a laser sight, such as Project Horror, the laser dot actually increases in size when it's targeting closer objects, and decreases in size when it targeting far objects. Is there any way that you could implement that visual feature to this mod in the future? Also, again with Project Horror's laser sight, it seems to have another layer of red mixed into it that causes it to have a really nice laser glow effect. If possible and you feel up to it, you should try your hand at applying a similar effect. It just adds a whole other layer of awesomeness to it. Just another suggestion.
Top

I'm glad you are enjoying the Toolbox!

Laser Sight size: actually, I took an extra step or two to make the size consistent on all distances. It won't be a problem to add a toggle, though.
Laser Sight glow: I'll take a look at Project Horror, and maybe will implement the glow too.
The issues are added here so I don't forget.

Thanks for the suggestions!
Top

Sounds awesome man. A toggle would be the best option if you do reimplement the resize feature. Good luck on the project.
Top

Btw m8f, regarding the issue you posted above with regards to coloring the crosshair based on monster health (white on no target - green to red on target): How will this interact with TargetSpy? Will it be just an option in the Precise Crosshair menu, or will it be a new default?
Top
60 posts