That would be a seperate mod. This one won't include modded original statusbars besides the ones that are included. Besides that, I really don't see the point in such a request since it adds absolutely nothing useful.
Top

I'll second that, such a thing is beyond the scope of this mod. That being said, making a mod to do this yourself shouldn't be hard, as you'd just need to provide the font and statusbar graphics and name things appropriately.
Top

In general, there are two features we still intend to implement into this project:
- Strife support
- System time stats (which should be technically possible since quite some time now)

Plus support for more (if not all) entries from the idgames archives which don't look so great out-of-the-box. And if it's not too much work, Brutal Doom support might be considered (but in any case, it would be the last thing on the to-do-list).
Top

Hello, I've been using this mod for a while now. It's great because I love seeing all my ammo at once, and I get to appreciate the look of custom status bars.

I do have two questions though:
1) Around two years ago, someone asked if you could display the type of armor behind the Armor percentage, and you said this wasn't a planned feature. However, would it be possible to display a tiny icon (for instance, a green or blue square) next to the Armor percentage, like the tiny Berserk icon next to Doomguy's face? The way I see it, it wouldn't distract too much from the actual numbers and would allow the player to see what type of armor they have without turning Boom colors on.
2) Would it be feasible to toggle Boom colors for each section of the status bar, or would it be impossible/too much hassle?

Thanks for your answer, and thank you again for this mod!
Top

1) Personally, I don't see the usefulness of such an option. But well, the Berserker mode indicator is similar. Maybe one day, but other things would have higher priority, like that system clock which is even a menu option Russian Doom, btw. Before we don't have that, I wouldn't get my hopes up for anything else.
2) That doesn't make any sense to me, I'm afraid. It's all or nothing and you don't get it any other way anywhere else, either.

In general, the project is currently rather in a frozen/sleeping state. As a matter of fact, if we never updated it again ever, I gotta say I'd be kinda OK with it since it has everything I ever wanted to be included. Strife support is nice, but not required, because a) it's not very popular and b) hardly any mods exist for it.
Top

I would love an option to switch positions of ammo and armor on splitted version like this:

I would do it myself but I don't understand zscript at all. Could someone help?
Top

Quoting from the OP, I dunno any more for how many times:

Please refrain from asking for switching ammo and armor counters.

But good luck finding anybody who is coding statusbars in ZScript these days. Everybody is sticking to SBARINFO still. Admittedly, it's a lot easier to understand, however also limited in its capabilites.

Anyway, I will explain again why we won't do this:
As soon as we start switching around elements of the statusbar, we have to start cutting the image in places where it gets problematic with mods which don't exactly follow the measures of the original STBAR lump. To make things worse, ammo and armor segment have different widths, so simply switching them in split mode means losing symmetry.
We already have to do some compatibility patches in case the split bar is missing a few pixels, and with the armor/ammo bar switched, we enter dimensions which are just out of scope for this project.
Top

NightFright wrote:Quoting from the OP, I dunno any more for how many times

At this point, you might as well just add NO REQUESTS in bold letters to the thread's title.
Top

I already outlined what we still want to do (Strife support, system time display, compatibility for all PWADs). Besides that, the mod is considered feature complete.
Sadly, I am also heavily depending on 3saster for this and he is currently not so active. My ZScript knowledge is limited as well, otherwise I might have at least been able to pull off the system time feature by myself in the meantime.

Anyway, if you think this mod should have more features than what we consider suitable, feel free to create a fork of the project on Github and adjust it to your personal needs. That's what Github has been made for after all.
Top

the misalignment is noticeable when switching from/to the automap
this happens in every permutation of display resolutions, scaling options I've tried, both with and without gzdoom's widescreen assets loaded

I've determined that this is controlled by a variable defined at line 11 of ".\filter\heretic\zscript\statusbars\unsplit.zs"

So this is indeed intentional, but I'm courious about the reasoning behind this...
was this needed in order to ensure compatibility?
can this be safely set to 0?
You do not have the required permissions to view the files attached to this post.
Top

This is something 3saster set up like that and he would be the only one who can tell how he did things the way he did and why. It's a bit hard to spot on your comparison screenshots, but I think I know the effect.

If you go back in this thread to about May 2020 (page 17 or so), there was someone who noticed a 0.5 pixel offset in some cases (for the key gems, to be precise). It's related to scaling and doesn't occur all the time. My educated guess would be this is part of that mechanic. Back then, 3saster wrote:

By fiddling around with the scaling, you can sometimes cause there to be a very small gap in the gargoyle skulls too. Sadly, nothing I can really do about it, it has something to do with the scaling code.

oh it was already pointed out then.. I guess I haven't searched the thread that well..

thank you for the explanation, I'll keep it in mind if/when something weird will come up when using the mod (I've edited that variable, for personal use)
Top

It seems to me that in this mod, there's a better symmetry. Just look at how the key gems are perfectly centered with the elvenwand on your second screenhot.

Gez nailed it, it's a matter of symmetry (the alignment thing Nightfright mentioned is a different issue). The standard HUD in Heretic actually is offset to the left (by 2.5 pixels, as per the comment) from the center. While this isn't really super noticeable/distracting with the original HUD, with this HUD, since it is overlaid over the weapons and can have transparency, this lack of centering becomes a lot more jarring, especially on certain screenblocks settings, see below. It's not perfect (like the Dragon Claw), but that's on the fault of the weapons themselves not being centered consistently, and aligning it to the center properly fixes more issues than it causes. If you prefer it as it was on Heretic's original HUD, there is no harm in changing that number back to -2.5. 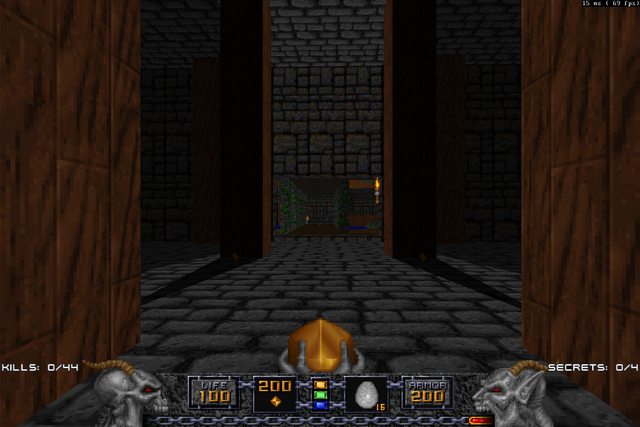 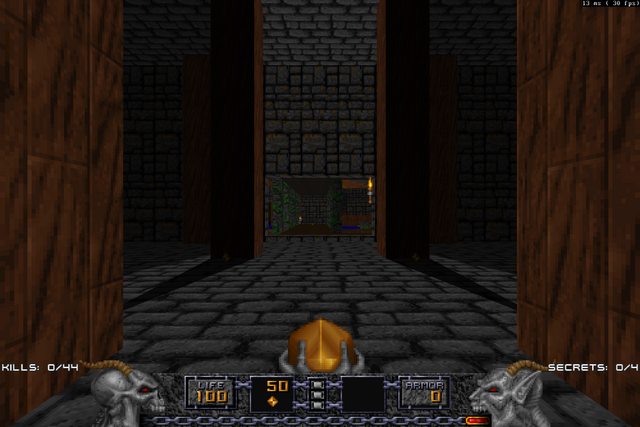 You do bring up a good point that it does cause a discrepancy beween the automap HUD and normal HUD though. I'll have some time from May onward to work on this again, which I wanted to do anyway to tie up some loose ends on this mod (namely merge what partial work was completed on the compat branch and add the system clock option), so I'll see if there is a graceful way to resolve the discrepancy when I do that.
Top

nice.. thank you and keep up the good work!
Top
368 posts