Rip and Tear wrote:I foresee the importance of upgraded RAM decreasing, partially due to the growing popularity of SSDs making paging, which used to grind the system to a halt, more of a mild inconvenience. 16GB seems reasonably future-proof for now.

While I'm not one to cry "write cycles" whenever SSDs are mentioned, I do think the logic that SSD paging makes RAM less important is a little flawed at least for the next few years (we can debate this again when Optane and its competitors are realistic purchases). Last year we saw the introduction of QLC NAND and with that another hit to SSD durability. I don't know about you, but at 0.1 drive writes per day starting to become typical for an SSD but I'd rather avoid paging regardless.

And to be clear 0.1 drive writes per day is enough for most people, I just don't think that's "SSDs are going to replace memory" levels of durability.

That said I do agree that memory upgrades have gotten less important a long time ago. The typical capacity will continue to increase nonetheless, but unless you're a tab hoarder I have a hard time imagining what one needs even 16GB for. I have 32GB in my Threadripper because purchasing less didn't make much sense ($/GB wise and looking to the future I don't want more 4GB modules in my collection that I don't know what to do with), but I sit barely above 2GB of usage unless I'm compiling across all 32 threads. And even then I think the maximum I've observed being used was like 17GB.

Now of course your work load is probably very different from mine, and don't get me wrong there are plenty of workloads that can use that and more. I just feel at this point memory capacity is continuing to grow only because memory got to be so cheap prior to the recent shortage vs actual task related demands.

Of course part of that is I've so far managed to avoid using a lot of web apps (Riot.im is the only electron app that I use), and I've also avoided the container craze. Because, you know, we have so much memory we can waste it and your disk space (seriously the only reason I went from 500GB being enough to needing 1TB is because of container images) loading multiple operating systems side by side! I'm probably on the low side regardless. Haven't quite come to grips with the fact that a normal user might be more resource demanding than me as a "computer person."

Graf Zahl wrote:I see this each day at work. Our web programmers have to do double the actual work because some of our more laggard customers still work with IE10 and telling them to upgrade, or else... would only result in some other developer getting the job.

If you are doing any creative media work (game dev/graphics/modeling/texturing, video editing, or like in my case, professional audio production), 16 GB is bare minimum TBH. It's not even tab hoarding - these programs just load up very big (high res) data.

The spare unused RAM is for headroom so that the OS constantly runs smooth.
Top

Blzut3 wrote: That said I do agree that memory upgrades have gotten less important a long time ago. The typical capacity will continue to increase nonetheless, but unless you're a tab hoarder I have a hard time imagining what one needs even 16GB for.

Without paging, 8GB can become a bit tight, considering what kind of memory wasters web browsers have become. For any other use case I normally doesn't even come close to this being crtitical. But then, I do not play modern HD games.
Top

Forgot to do a post-mortem on this. It was so short-lived it almost didn't matter. I suppose it's a good reflection on how GZDoom fares with burst downloads within a couple days, though. 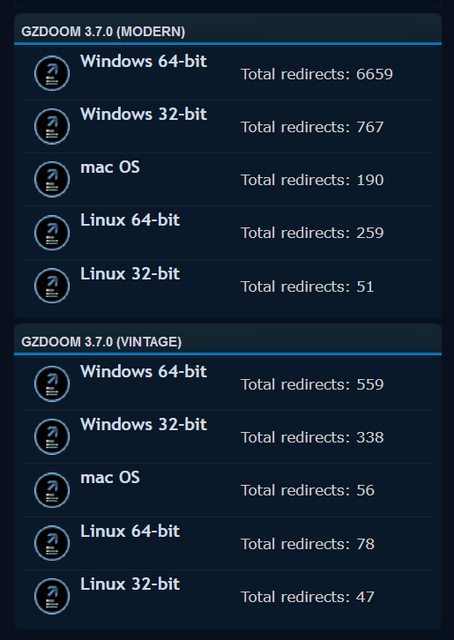 
added an option to GAMEINFO to either force or disable loading of the default lights and brightmaps.

Which option is it?

vintage version is very slow and has graphics and sound problems.... what happend?
Top

sebastianali wrote:vintage version is very slow and has graphics and sound problems.... what happend?

Don't report bugs or technical problems in the news threads. You should start a new topic in Technical Issues, and give as much detail about your computer as you can.
Top
69 posts