Works for kriegsland as well, but the akimbo icons are messed up. Excellent job!

EDIT: decided to edit this after noticing i expressed myself badly. I defined akimbo spawn sprites as the same as their single counterparts, so the mod isn't guilty of everything.
Last edited by Dr_Cosmobyte on Tue Mar 26, 2019 12:37 pm, edited 2 times in total.
Top

Really cool tool. I think it is something that everyone wanted but no one wanted to create! lol

BTW, a few things that I would have preferred ( or you will want to add in future or soon ):
- Toggle or not the button for the weapon weel;
- Custom Size;
- Custom HUD position;

- Ammotype 2 it is not showed, although it is specified in the weapon.
Top

I'm tickled pink that this just so happened to with ARGENT out of the box. A happy accident.

Given how this weapon wheel is inspired by Doom 2016, and also how later updates to that game gave you access to a "second wheel" in Snapmap mode, how feasible would it be to include a "switch page" button that can be pressed to flip to another set of weapons?

A prime example of this would be the outright massive amount of weapons in HXRTC Project: Golden Edition; the weapons become so tiny on the wheel that it might as well be split up into multiple wheels so you can actually see what you're selecting. Project Brutality, in any of its forms, is also guilty of weapon oversaturation, in a similar manner.

Side-note: When loading Death Foretold with this mod, the Praetor Gauntlets and EMG Pistol look a bit strange on the wheel; the first-person sprites are used due to lack of third-person viewmodels. Might I suggest using the "current weapon" sprites from the mod's internal SBARINFO instead?
Top

Sorry to bump this, but I've noticed a bug with the release of GZDoom 3.7.0. Weapon sprites no longer display when accessing the weaponwheel.
Top

I can confirm I have experienced this bug as well, hoping for help.
Top

there are still some bugs like "NetEvent cannot be used outside of the map" i was using this in a test map when i press the wheel, i got that error
Top

there's a bug with the modern gzdoom engine where there are no icons at all, therefore i use the legacy version, can you managed to optimize for the modern engine? since now gzdoom had version 4.x
Top

This new version should work with new GZDoom versions! Unfortunately, I think I was working on a new feature that I forgot to finish, and I don't know if it'll break anything, but everything seems to work fine. Try it out with the new Embers of Armageddon and Combined Arms support!

This mod is brilliant and it led me to actually try out GZDoom with a controller (which was much better than I was expecting, tbh).


ShockwaveS08 wrote:Given how this weapon wheel is inspired by Doom 2016, and also how later updates to that game gave you access to a "second wheel" in Snapmap mode, how feasible would it be to include a "switch page" button that can be pressed to flip to another set of weapons?

I like this idea, but I guess enabling the user to sort their weapons between the wheels would either require some fancy menu coding or more weapon-mod-specific addon files (which is fine and worth it IMO).
~Nevertheless~, DrPyspy, if you decide to implement this... would you consider taking it a step further and allowing, say, 10 separate wheels? They could be fully custom or maybe just based on the weapon slots - either way, the point would be to replace the vanilla system in cases where each slot has a lot of entries. The user could then set bindings so that e.g. holding the 2 key brings up a wheel with only pistols in it (rather than having to hammer it 5 times to get to the one they want or whatever).
This could also be cool for making a "favourites" wheel.


ALSO also, as far as I can tell, PyWeaponWheel works just fine with DRPG SE + DRLA.

It even coped preeetty well when I removed DRLA's arms limit... 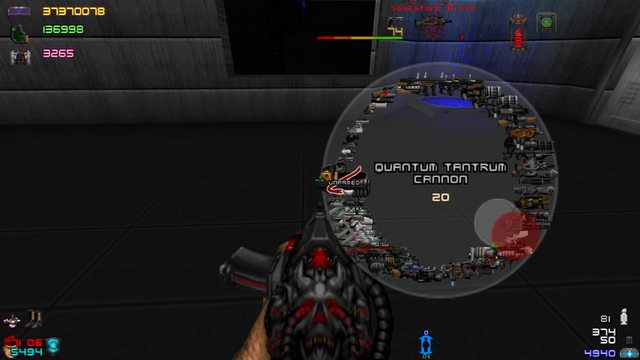 ...but it does seem that past ~20 guns, adding more to your inventory causes the probability that triggering the wheel will crash the VM to approach 1:

I've noticed that with Beautiful Doom (specifically the test builds Grim has up), I cannot select the fist with the wheel at first until I select it manually with the hotkey I have Slot 1 binded to. This applies to all three weapon modes.

EDIT: Another thing it should do is override anything that disables mouselook whenever the wheel is opened.
Last edited by Sgt Nate V on Sun Jun 16, 2019 7:15 pm, edited 1 time in total.
Top

Nice little mod. Useful for mods where there are a lot weapons (but obviously not too many). It makes finding the right weapon in such a mod very quick and easy.

I noticed a bunch of floating point truncations on startup with dev messages on. Are these known about?

Wheel does not scroll if always mouselook turn off.
Top

Doom 4 Weapon Wheel like! (this is a test, of course)
https://www.mediafire.com/file/ip6tcjns ... e.pk3/file
i love this mod,thank you very much bro.
Top

I know near to nothing about making mods for Doom but I was wandering if it's possible to make this mod work like an addon from WoW called Opie (https://www.curseforge.com/wow/addons/opie) with nested rings like behaviour, grouping weapons by slot or type
Top
69 posts