Marisa Kirisame wrote:Oh, Doomreal will have all the u1 player classes . . .

Man that is cool. I remember pictures of that weird ass 'proto-Kurgan' back with a batch of leaked out U1 Beta stuff a few years ago. Always made me chuckle at how disturbing and goofy it looks along with the weird blob monster and beta Nali skin/sounds, haha.
You very well may have become my favorite active Doom modder at any rate-- you're really going above and beyond with more obscure assets. I'll be eagerly awaiting updates and status!

More on-topic (Although this may be an irrelevant point especially since it involves other mods) I noticed sometimes when using model-mob replacers alongside Doom Tournament the Instagib rifle would cause crashes a lot of the time, especially when hitting near Chasm(ZRift) mobs with it's AOE. It seems to spit out "VM execution aborted: tried to read from address Zero" and references 'ShredCorpseHitbox.Damagemobj', 'Actor_A_Explode', as well as 'SuperShockBall.4' and 'SuperShockBall.A_BallExplode.'
This may just be Chasm's stuff exclusively because Q1 and Q2 mobs never gave this crash (or at least rarely did thus wasn't an issue) but nonetheless it is an odd/intriguing thing I could never quite track down-- I just figured I'd mention for reference since I hadn't seen anyone els bring it up of yet in the thread so far.
Top

Damn, I thought I fixed that crash.

Oh well, I pushed an update to hopefully fix that.
Top

OK so... Something big's happened, and it's the reason why the development branch now requires the most recent GZDoom devbuild available. There's been a major change on HUDs, you'll notice soon. Things like pickup messages and the like are no styled appropriately, plus there's the whole "chat window" on the top left. 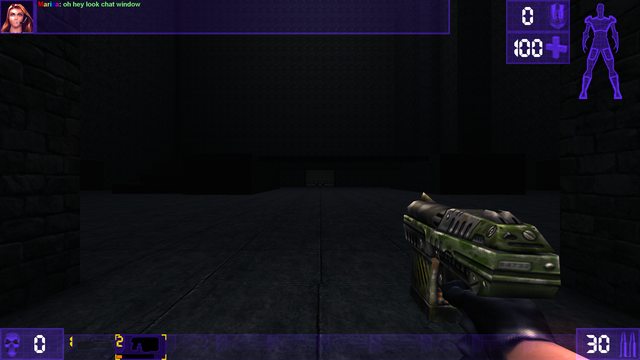 Doomreal also makes use of these features so it needs the same GZDoom version too if you wanna test it out in its current state.
Speaking of it, as of now most of the items are implemented, and the Automag, Stinger and ASMD are fully functional. As usual I'm working on this as fast as I can, when I can. Hopefully in a month or so everything will be complete, who knows...
Top

Are you going to add a toggle between revised and original weapon damage and maybe also to enable/disable headshots?

Not really. Anyway, I'm hella busy right now with the Unreal stuff, but I should actually be done soon-ish and have a beta release ready.
Top

Just popping up to say that the first Doomreal beta should be coming soon. Only a couple weapons left to implement here.
Top

Awesome, look forward to it.
Top

Thanks to you my interest in Unreal has been rekindled. I beat Unreal for the first time the other day, on Unreal difficulty no less (Unrealception

)
Also registered on OldUnreal and applied for beta testing of 227j, can't wait for Doomreal to drop :3
Now I just need to finish Return to Na Pali

There are so many changes piling up on the development branch that I wish I could merge back into stable... Sadly until there's a new GZDoom release I can't really do it.
Top

Hello, Marisa Kirisame, I was wondering if you could make addon that has the Nali 3 weapons.
Great mod by the way!
Top

Latest GZDoom devbuild & latest DT & Doomreal devbuilds. Can you do something about this, or do we need to bug the devs about it?

Yep, it's the classic "wanna interpolate the view but have mouse smoothing disabled? Well, fuck you"

Yeah, I can't do anything about it.
Top

Using the development build, I don't seem to be able to activate the eyeball shootwalls in SIGIL.
Top
324 posts