...this is completely awesome, holy crap! I must say, you have me promptly hyped for this. Definitely keeping an eye out on this and any other of your future works =)
Top

Hi there!
We have come a long way and are now ready to confirm the release date of Doom Slayer Chronicles on 01-09-2018.
As a mod author, I want to thank our entire team for their invaluable assistance in the development.
X --> 0, Blackmore1014, D_SMILE, KoD_Connect, my friends, without you - it would be impossible!
The distributive of Doom Slayer Chronicles will include the GZDoom engine 3.5x64 Modern (minimum supported version) and the basic HD texture pack without PBR materials.
Separately will be available for download:
- DSCmaterialPack - PBR materials for basic HD textures.
- DSClowResTexturesPack-standard resolution textures (for systems with low performance).
- DSClowResMaterialPack-PBR materials for low resolution textures.
Top

This mod is brought to you by: https://youtu.be/66gSvNeqevg

***love me some Disturbed, by the way!
Top

I haven't started the game yet, but we *may* have an issue: 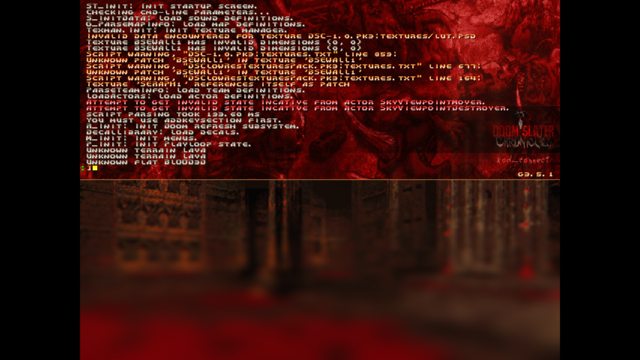 I don't know if it'll actually affect gameplay, though. Also, how do I get it to run w/ Guncaster?
Top

OP might want to change "95% complete" to "Released" too.

Wait why is this set up like a standalone? Most of us can just load it up in ZDL or whatever front end we use.

EDIT: Had a quick run with the mod on the first level of the first episode, pretty fun with some of the minor mods plus my RDND mod I have without issue but the intermission graphic looks like this:

GZDoom 3.5.1 is forcing me to play at my native resolution (2560x1080) and I would have to use an older version of GZDoom (3.4.0) to use the resolution selection that's not the scaling thing. (despite screenshots still coming out in native size, same with video). (I don't have a problem using an older version for this)

But another question for the developers, besides the title screen is there any other music that would make YouTube's ContentID go apeshit? (Since I'll do a Doom Mod Showcase of it soon) It might be triggered in the title's case since I DO recognize it, it's Symphony of the Dead by Therion. Lovely little instrumental piece by them |m|
Last edited by Armaetus on Sat Sep 01, 2018 7:36 pm, edited 1 time in total.
Top

I will see what I can do to ensure D4D is as compatible as possible with this mod.

I'm about to try it out for myself and see how it goes. If adjustments need to be made, then I will work with the mod author to figure out any incompatibilities should I find any. I don't think any will be required though, but I can't tell yet.
Top

This has some nice ideas and architecture, and while invasion wads may not be to everyone's taste, they certainly have a place among mods. Still, I can't help but wonder:


bifurcator wrote:Doom Slayer Chronicles is the most beautiful and technologically advanced mappack for Doom2 singleplayer.

is this beauty and technological advancement what was needed to replicate 1995 technology - the virtual boy? Because I cannot find other words to describe how this tends to look a lot of the time... The filters really need to be toned down big time in many areas of the levels.
Top

Just gave it a long run to check how everything looks like. So far, only had a few hiccups using the "Ultra" textures. Played it with D4T.

Honestly, this mappack by itself looks super polished, the ranking system is fine to look at, and the mod compatibility will keep this project alive forever for all it's worth.
HOWEVER, I have a few complaints which should be addressed if you're planning an update:

1. Release. the files. separately. It's a pain to use a pre-configured GZDoom build, only to re-configure it for my own personal settings. I get it, some people might not know how to load files with different methods(although it's basically loading two files ONLY), but what's the point of putting the whole pack if I only need a part of it?
2. I tested the first map with other mods, and noticed a bug with the ammo drops. In vanilla, the ammo icon would disappear, and the vanilla ammo box will be there instead.
I'm not sure if it was intentional or not, but if it isn't, it's problematic with mods like D4T which have the EXACT SAME sound for ammo pickup, so it plays twice at once. It's like it just summons the ammo pickup instead of being an actual ammo pickup. Please fix it, if possible.
3. While I like the ranking system and the "achievements" thingy(like killing 5 demons in 10 secs), I think it needs an improvement. Maybe something like Quake 3 Arena's Medal system, or something similar to Doom 2016's MP Medal System? Could look more fancy with that.

And that's it for now. I'll report if there's any issues along the way. good work!
Top

Tried it - and I am split somehow. On the one hand it's beautiful, the visuals are brilliant, this is high-end quality. But I have to admit I am a bit disappointed by the game itself. I expected something different than just a invasion mod.
Top

This works with D4D just fine. In fact it helped me recognize a few flaws I noticed with D4D which I will be addressing soon with the time freeze powerup.

Well done! I love this.

However, a few of the objects could have NOTIMEFREEZE like the particles around the health pickups. Also I noticed the ammo things can sometimes only spawn bullets with mods like D4D.

@Tormentor: I think it's safe to say this is more Painkiller inspired.
Top

The tentacles somehow didn't lose their hitboxes and can still be shot even after they go down.
Top
73 posts