Idea 2: aerosol-like weapon but shoting something like steam or some kind of magic energy... you will no need make burning sprites for monsters to make it look good. B1 weapons mod have flamer maybe something like that?

Idea 4: Revolvers instead of berrettas

The Grenade Launcher is made redundant by the Napalm Launcher.

A powerful pump-action shotgun that pumps slowly would be badass.

Revolvers should be the equivalent of the Berettas in the old-timey class.

I think a Red-Colored Chainsaw would be neat. Then again I guess I'm thinking of it as an Evil Dead reference and a potential crowd-control weapon. Plus I can imagine the secondary being pretty good with a swinging chainsaw attack.

Your ideas don't sound half bad.

And GAA1992, I love the new Assault Rifle sprites!

chronoteeth wrote: gonna be sayin somethin that might be weird, but that gun sprite is just awful. not in the drawn sense, but its just almost too good if that makes sense. my mind wanders to mods where they take that base sprite and slap on a muzzle flash but using a combination of fancy effects and camera shifts + way too beefy firing sounds for it and you get a gun thats like gold: beautiful, but weak as hell

So, you mean the sprite doesn't match the style of the art overall? I think i understand that.

SSS4-CHGFB0-2.png
Does this looks better?

SSS4-MISGA0.png
Re-did it. Let's see how this one goes.
You do not have the required permissions to view the files attached to this post.
Top

I am making the animations so Caleb takes his arm off the gun first, like he's going to pull the trigger from behind with the left hand =p

EDIT: eeeehhnnnn i am not liking it. The weapon looks too gritty and photo-ish in game. I think i must continue my quest.
Top

I kinda thought the first one was OK, barring the buttstock looking a bit off
Top

The shading is a bit off, agreed. Hope you can find one decent Assault Rifle sprite! I'm sure there's plenty of them.
Top

GAA1992 wrote:I am making the animations so Caleb takes his arm off the gun first, like he's going to pull the trigger from behind with the left hand =p

EDIT: eeeehhnnnn i am not liking it. The weapon looks too gritty and photo-ish in game. I think i must continue my quest.

A thought. I think Railgunner's Trooper Mod has an AK-style weapon where the left hand is gripping the trigger of the grenade launcher on it, maybe ask him about using those? Make it look like Caleb is holding the trigger, so no need to animate the hand being removed?
Top

Thanks for the tip! I am going to talk to him.

If you are interested in an old school weapon version, here is a sawed off. (creds: Monolith, Dzieran)
If you like it I can do the other weapons with these sleeves. I think fabric for old and leather for new works well.
Top

I loved it!!! If you could pull the other sprites i'll gladly release them as an add-on (don't get me wrong, but i am not sure if i know how to do ACS for alternate skins) for the public. Thanks xenoxols!!!

In this update i added two new weapons, automatic reload for the shotgun, and some goodies that are worth reading the changelog. Some still are left to do, like the Chex Quest compatibility and the altfire for the Assault Rifle and the Machete, but stay sure this will happen in the future!

Have fun for now!

Spoiler: READ ME, I AM THE CHANGELOG!
- Moved TNT to slot 1.
- Changed the blood in the zombie barrel.
- Berettas and sawnoffs are faster and sawn-offs reload automatically.
- Dual Sawnoffs now deal the same damage as the single.
- Explosive ammo values were changed from 2/6 to 4/12
- Explosive ammo drop ratio with TNT changed from 6:4 to 8:2.
- Added the Assault rifle and the Vulcan Cannon as new weapons! The Assault Rifle spawns on SuperShotguns or Chainsaw Spots, while the Vulcan Cannon may spawn instead of the Cursed heart on a low rate.
- Fixed some state bugs on the Leech staff.
- Moved MAC-10 to slot 2
- Moved Light akimbos to slot 8 and heavy akimbos to slot 9.
- Changed Life Leech deselecting so it won't make weapons invisible, somehow. I think.
- Improved Pistol accuracy in 50%. Now you have a fair reason to use it!
- Added individual sounds for ammo boxes.
- New casing sprites by Captain J!
- Added some underwater sounds for Caleb.
- Fixed credits for sleeves
- Took some sounds out (if i didn't, the file would be 1MB larger).
- Added a new laugh sound.
- Moved Flaregun to spots where explosive ammo may be found and created two spawners which drop randomly the Assault Rifle OR the jackhammer. Replaces Chainsaw and Super Shotgun (because Doom 1). 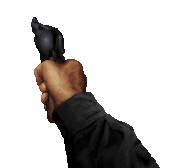 Am I on the right track?
Top

Sweet holy jesus, you are.

@xenoxols Not bad, but I think the older Thompson with drum mag and foregrip would be a better fit than the M1A1 for a guy like Caleb.
@GAA1992 I have a list of feedback and suggestions regarding the current weapons so far: I'll think of more when the other weapons are in.
Top
285 posts