Just a somewhat important hotfix, folks. Check the OP for the download link.

The next version of The Edge of Time that I'm releasing will have further improvements on the polish side of things then I'm probably going to resume work on the maps. I really need to remedy the lack of polish in some areas of the mod.
Top

I like the old-school feel to this mod. its like im playing a game from the 90's except the over the top coin collecting. its kinda like sonic in that way ha
Top

Another Day, another revision. The download Link is in the OP as usual
Top

I have just finished playing the 1.5 beta, and I did have a lot of fun. The level design reminds me a bit of Golden Souls 1/2, what with platform elements and features not usually seen in regular ol' Doom maps. The money collecting aspect certainly helps make combat a bit more challenging/frantic, with you having to make critical judgements every nanosecond as to whether to rush in close to a mob and risk death, or stay a safe distance and watch a major payout disapears into thin air.

A few things I particularly liked were:
-The Pojo Egg was a hilarious/nice idea, inverting the usual trope of being turned into a chicken being bad. Any chance a of mode where you play through the entire game as a Pojo?

-The bounce pad gameplay of Episode 3, particularly the Abyss level. People may condemn me for this, it would be nice to see a boss fight against a massive Icon-of-Sin style enemy where you have to use bounce pads to get up high enough to take a shot.

That said, I have a few concerns I want to point out:
-Imp fireballs are ludicrously powerful - on my first playthrough, the first imp of the first level literally one-shot me from 100 health! Through out the game, imps would regularly win infights against the likes of Cacodemons and Hell Knights. This didn't stop me from completing the game or having a fun time, but I wasn't sure if it was intentional extra challenge or a bug.

-The poison cloud flechettes don't lend themselves well to the gameplay. Using one (or getting one from a Literal Chaos Device) pretty negates any chance of collecting coins from the enemies you use it against, as picking them up before they fade away becomes impossible without taking damage from the cloud. If it was changed so you are immune to your own clouds, that would solve the problem immediately, but as it stands, I used the flechettes only a couple of times at the beggining then never used them again.

-Another thing about the Literal Chaos Device; you can cheese any boss fight by saving up a large number and spamming them at the boss until one gives you Archvile Flame - will a very low failure rate, it will one-hit anything/everything in your path. I recommend giving bosses resistance to Archvile Flames.

-While destructible trees are a nice touch, rewarding a player with points for destroying them kinda encourages silly behavior, like staying a level after you've found the exit/killed all the monsters, and destroying every last tree to artificially inflate your score. It's particularly a problem in Episode 2, where many levels have large numbers of points-giving trees up on high ledges around the edge of outdoor areas.

-The Heretic enemies, in particular the Gargoyles, look out of place outside of Episode 3. Granted, the Gargoyles do have a lot of features in common with Doom's demons, but the art style isn't quite right for them to slot in alongside them seamlessly.

-While some weapons, like the missile launcher, Argent Chaneler and nailgun have nice, smooth animations that make them feel weighty and satisfying, others like the assault rifle, heavy chaingun, and hunting rifle look really bare-bones, and IMO could use some beautification to match the rest.

Good luck with this, It'll be nice to see what comes next!
Top

@Tesculpture: I encourage you to update your copy of the Edge of Time to the newest version. I have done my best to remedy the lack of polish on certain things and you'll find that the imp's fireballs have been nerfed slighty, also the Archvile's flames are no longer as powerful as they used to be (it was mostly due to a bug I fixed where the Flame trail afterimages inherited their damage from the main Flame trail projectile, I also fixed a similar bug with the Hellkite bouncing balls).

As for the Heretic Enemies, you'll understand once episode 4 has been created and released.
Top

I have once again updated my mod with yet another revision. A bit more polish here and there and some bugfixes under the hood. You can grab the newest version in the opening post as always.

And now for the changelog!

It's been nearly a month since I released an update but you'll find the wait is totally worth it. Here's the changelog.

As usual the dowload link is in the opening post.
Top 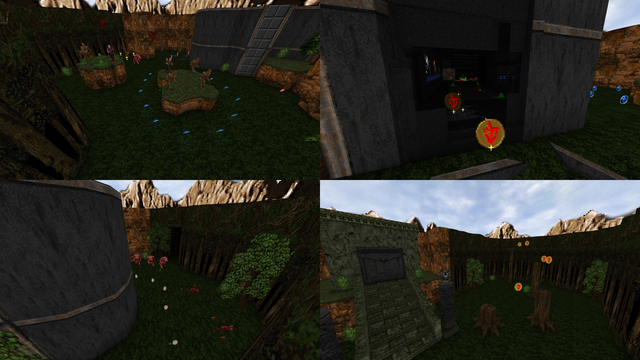 And a couple of screenshots of the new levels included in this build (you can also find the screenies in the OP as well!)
Last edited by FireSeraphim on Tue Dec 31, 2019 8:44 am, edited 1 time in total.
Top

Happy New Year's everyone! I hope you'll enjoy this particular release, I have been burning the midnight oil for the last few weeks in order to get this build out before the year's end. You can find the Latest Build in the Opening Post as usual.
Top

I been working on this update all month, but I couldn't have possibly done it without the helpful critique and insights of people like Zikshadow and Combine_Kegan! I am ever so slightly hyped, my birthday is coming up soon (It's on February 8th and I'll be turning 30 this year). Anyways I hope all of you appreciate this revision and please leave any helpful critique you can!
Top

I've been having a ton of fun with this game so far! It's taken me a lot of deaths to claw my way through, but now I find something that no death can fix. In E2M8, the boss fails to spawn, though the music is playing and the health percentage has shown up. I'm playing on 1.8.1r, the most recent version listed here, using GZDoom on Windows 10, if it helps.
Top

That's strange. It will be a while before I can release the next update because I have rather specific plans for it.
Top

A new version is on the horizon.... Expect a video trailer soon.
Top

After a lengthy five month absence, a new version of TEOTPC is finally here and with it a new trailer:

And here is the changelog