Projects that have specifically been abandoned or considered "dead" get moved here, so people will quit bumping them. If your project has wound up here and it should not be, contact a moderator to have it moved back to the land of the living.
129 posts

Korell wrote:Did the difficulty change with the latest version? Just done MAP05, the one at the airport, and it seemed like the bigger enemies (the dual wielding guys) were hitting harder than before, and the rocket launcher guy was one-shotting me. It may just be to do with the layout, though, as I was caught off guard (for instance when the dual wielding guys come out the toilet stalls when you go to the hostages) and the rocket guy was in a more open area and I wasn't exactly looking in his direction at the time. Or it may just be me. I did skip to MAP05, being as I'd already done the previous levels in a previous version of the mod, and the save wasn't compatible with the latest version. Don't know if this would have made a difference.

There's been a new boss for awhile, who looks like the dual uzi guy but wears green and has an AK47. Those guys hit REALLY hard and you wanna keep your distance from them whenever possible.

And nah, skipping levels makes no difference cos you don't keep excess health, armor, or weapons between missions. You begin every mission at "pistol" start.
Top

Now this is what the original game should've been, this TC is just awesome.

Also, can you add gibbing?

It's such a cramped dueling area, and his attacks are so devastating, I didn't want him to have more HP than Ali, who has the most of all the bosses.
Top

Okay, significant update: replaced a bunch of enemy and furniture sprites given my not realizing why said sprites were so dark when I ripped them. Everything looks like it ought to now, and you can see details in the sprites that weren't noticeable before.

Expect a proper release in the near future, trailer and all.
Top

I have made an addon to this TC, which replaces the music with the original Operation Bodycount music (CD music) composed by Joe Abbati.
Download link: http://www.mediafire.com/file/qw1ec3gzy ... dmusic.rar

The addon only replaces the music in levels, not in the title screen, intermission screen or the briefing screen.
Top

Heh, I wondered if someone might make a music add-on. You can see why I didn't use them though: there's maybe one track that's any good for action gaming, out of a measly four tracks total.

I think I still have a couple chopped-up versions of track 4 somewhere, which I used in my first attempt at remaking OBC.
Top

God damn, this TC is amazing! I really admire how you remake old shitty DOS shooters! One little idea, I was thinking Baradj could drop an upgraded replacement for your shotgun that fires more pellets and/or does more damage, or shoots faster or something. It would make killing him feel a little less tedious, and a little bit of an incentive to kill his ass. It would also help if Ali dropped a missile sometimes.
Top

Just thought I would submit what the skyboxes were on Oil Rig, Desert and Horus levels, as they were different before (not forcing you to put them in, just thought I would show how I originally thought they could be) EDIT: The desert comparison is switched around, my bad 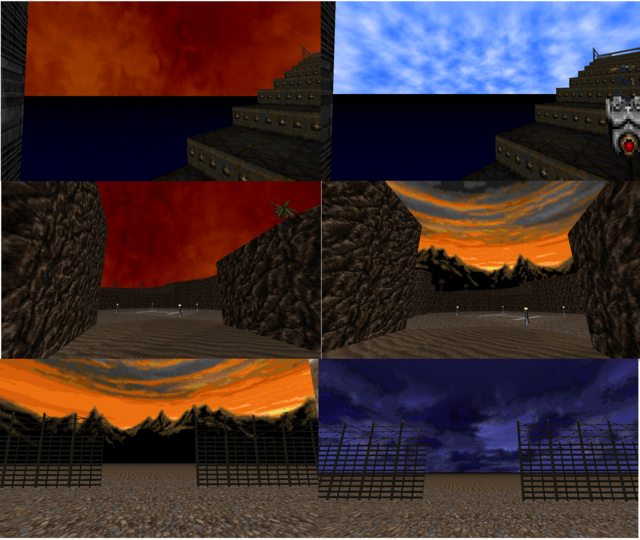 QuakedoomNukem Cz wrote:Just thought I would submit what the skyboxes were on Oil Rig, Desert and Horus levels, as they were different before (not forcing you to put them in, just thought I would show how I originally thought they could be) EDIT: The desert comparison is switched around, my bad

Yeah I found some of them worked better than others, and some worked better on different maps. Switched em around 'til they looked right to me. The blue cloudy sky was a bit too cartoonish, and the space sky just didn't work, but I think I used the rest of em.
Top

Congrats on v1.0. I just played through the final mission to finish it off. Really enjoyed it.

I did find a couple of bugs on that last mission, though. Well, one is a bug, the other may just be something not realised with the map layout. Firstly the bug then. If you go to the lower floor of the plane and open the elevator hatch, you can see through part of the map as there is no texture present. Not sure if the elevator has to have been activated first, though. Then for the mapping layout issue. The passageway in the plane that you start the mission on is only textured from the inside, and so when you look out of the windows there is nothing there, but you can see that a passageway must be there through the open door, and this looks wrong. I've uploaded an image showing these two issues.
You do not have the required permissions to view the files attached to this post.
Top

Second one is just because of the use of the sky texture. First one is my failure to actually put a texture on that particular elevator linedef. I'll fix it in a little bit.
Top

This is awesome!
Doom is the game that just keeps on giving!
Top

So I don't exactly know how to ask this without sounding rude, but trust me in that I'm asking out of genuine curiosity and understanding and not to put you on the defensive or belittle the project.

As someone who has never played the original Operation Body Count but only knows about its infamy, I'm curious as to how far the term "remake" is being applied. Are we talking an improved "port" with fixes and some extra bells and whistles? Is it a remix of the original game? Is it a complete and total ground-up-built game that's only similar to the original in spirit and name? Or...

For instance, it says three missions. Again, from someone who never played the original, are these three based on the original game, or is only one them, and the other two are something you made wholecloth?

I'm very interested in this wad either way (I mean it's brought to us by the same party responsible for Strange Aeons so I'm interested by default) and will play it regardless, I just like knowing going into it how much of the remake is based on the original and how much is totally new.

Dr. Shotgun wrote:Is it a remix of the original game?

Pretty much. The enemies and main villain are the same, and the player's arsenal is based on the original game's arsenal (shotgun w infinite ammo, uzi, assault rifle, flamethrower, rockets) with a couple new additions (dual uzis, railgun, nuke launcher). When I started this trend a few years back with Nerves of Steel, I adapted every map from the original NoS and upgraded it so each one would actually be fun to play, using an engine that actually works, and giving a sense of place with each one -- none of which the original maps managed to do. The reason this remake took so long to get off the ground was because I had to take a different approach than I did with NoS, because the original OBC consists of 40 identical office maps, and I wasn't sure how to make that interesting until I thought of the idea to base every mission (9 of them btw, not 3) on another game that involved middle eastern terrorist plots. So it ended up being a throwback to all these games from the Amiga era with the OBC characters tying it all together. In the end the UN HQ -- the original game's setting -- isn't even seen in-game: you prevent its destruction in the final mission.

Basically I had a choice between "a doom engine shooter that takes place in an office building" or "a bunch of distinct counter-terrorism missions", and the latter won out easily. They've made plenty of shooters that take place in cookie-cutter offices, I don't really fancy adding another to the pile. I was trying to make a remake that was more fun than the original, and one of the requirements was to change the setting to something more interesting, but keeping the gritty feel of the original game.

Hope that answers your question!

Also, jet liner dumbwaiter texture issue was fixed, but I don't think I can change the tunnel visibility thing due to how I use portals on the map.
Top
129 posts