awesome, thanks for the update. ill play through this again on my free time. and honestly, i think you should just go ahead and incorporate that immersive camera mod into this.
Top

I've just come back to this mod after having played the original Demo, where I defeated War's Anatomy before probably getting distracted by something else. The changes I'm seeing from last time are all pretty good, and I dig the aesthetic and atmosphere in general. The only game that's ever freaked me out is Darkwood, to the point of making me anxious of continuing to play when I first went through the game after full release, but Divine Frequency's getting to about that same tier.

Now a criticism, spoilered for the sake of any casual observers reading this thread:


Spoiler:
The last couple nights I've been experiencing The Crossroads for the first time, but there's a bit of an issue with not being able to return to areas that's starting to make the game frustrating instead of anxiety-inducing:

Yesterday it was jumping down the hole not far from the Astronaut - lots of resources and ammo in the couple rooms leading up to the boss, but I went in with pretty much full supplies and ammo. Naturally, those supplies got mostly exhausted in the fight itself, and afterwards I couldn't go back down to restock everything that just got used up.

Today, I decided to go a different direction, went into the place where "multiple routes all lead to one" off the bat. However, when I returned from there after the miniboss, I think I was blocked off from returning due to some geometry changes. When I could afford to pick the 5000 Exaltations option from Actor Dude Bro, he gave me a sidequest, part of which wanted me to go back to the Walk Of Peace, which seemed to be no longer accessible, to get one of the floaty Runes.

I have the urge in games to explore every area and get every item, which I'm definitely feeling with Divine Frequency. However, I don't want to have to make 20 different saves before going through doorways or interacting with notable objects so that I can reload in case I discover five minutes or an hour later that I've locked myself out of doing or getting something. It's even making me paranoid to simply explore, because I never know when I'm going to walk across a floor-trigger that acts as a point of no return for a whole area.

Also, I know normies think it's cool and spooky to do loud jumpscare faces, but it just makes me cringe and breaks immersion. Please don't make a habit of doing that, it's going to ruin the atmosphere.

Altogether I think Divine Frequency is pretty fantastic and I'll be very keen to see what comes beyond The Crossroads level once I finally find time to complete it in a way I find satisfactory (and once more maps come out, if that's where the Demo ends). It's very satisfying to play a game that has a good feeling of pacing, where lots of quiet dread moments and small encounters culminate in big bombastic high-tension fights. The visuals and sound and mechanics are almost all great, I think it really just needs the getting-locked-out-of-areas problem to be handled differently.

EDIT: Turns out one of the areas I was talking about in the spoiler does in fact allow you to return after being locked out, thanks to dream-logic not-physically-connected doorways.
Top

I have updated the demo once again. This time featuring only The Crossroads. Seems rather appropriate considering it's a really long map that fully embodies the weirdness of DF. There are now also new enemies, items, and minor map edits. Many things have been cleaned up interanlly, such as redundant codes and GUI stuff. Here's a clip showcasing one of the new dudes added to the roster.

Excellent to see the next update happening and the progress is still going. Shame about 50% chuck of the TC has been removed since i enjoyed every part of it. But i do think it's certainly for the best because it enhances the worth of participating of complete release.

Spoiler: So i completed the current demo and here are the feedback. IDMYPOS is on 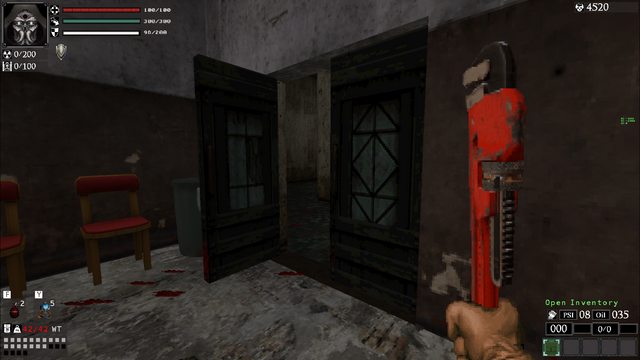 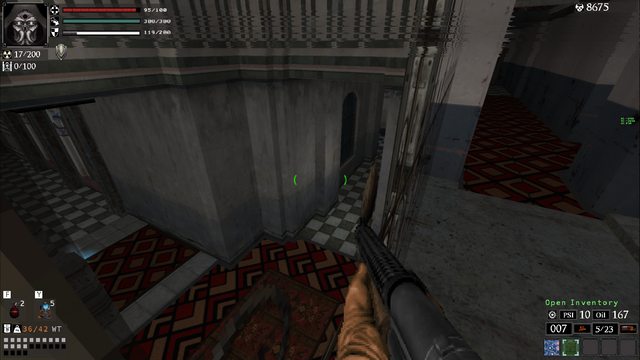 - Just found out that i can go through this fense. 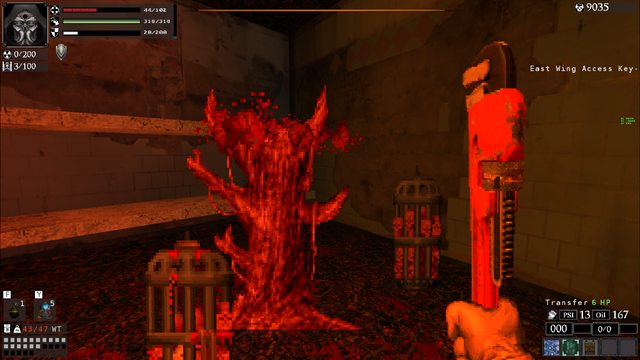 - Gib projectiles in mid air do not appreciate the props below them. They all float. 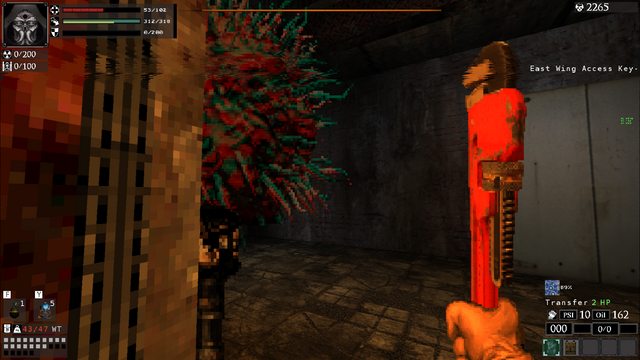 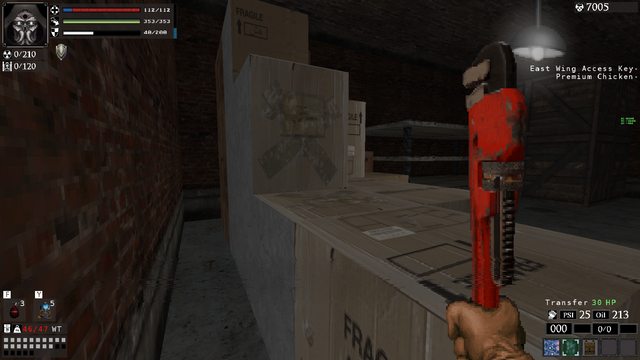 - These boxes has mismatching texture. 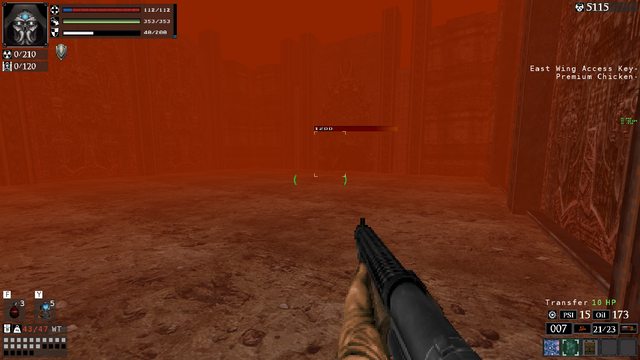 - Is it me?? Or when this particular boss arena goes up, the LOUDEST of all noise plays. But in next playthrough it never happened for some reason... 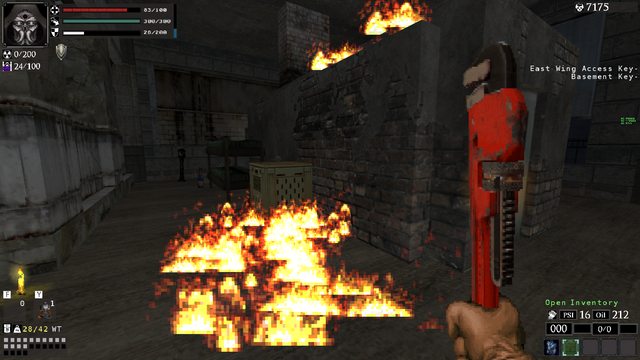 - It's weird that the Firebomb plays glass shattering sound effect although it's not a Molotov Cocktail. Also it can melt down the Metal crates. 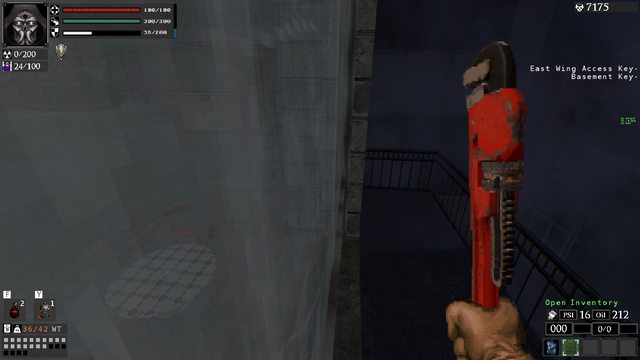 - I can go through this particular window.

- I still get damaged from Brains by shooting at them while equiped a Strange Ring.

- Since the current demo has no Sniper Rifle yet, why not removing the certain ammo at the last area? It's the strangest feeling when i have to kill a birdmen from far distance while having no Rifle to kill.

That's about it. I would like to hear more news from this TC because i'm definitely hooked up to it. And if there's one more thing i honestly love in this TC, that'd be:

A Premium Chicken. It tastes so good even ghost wants a piece of it.
Top

Fixed all of the bugs in the screenshot. But I cannot seem to figure out what's with the noise from the structures rising. I THINK I may have figured it out, but no clue yet, we'll have to see in the future. It's not one I can replicate, unfortunately.

Also, the revelation ring is the one that helps you resist reflected damage to an extent. You will still take some damage, but not full damage. The strange ring iirc resist heat damage.

The sniper rifle is given as a reward for bringing the shadow some chicken lol. The birds aren't supposed to spawn if you don't have the rifle, but rather small floating enemies. I will have to take a look at the code, since I cannot replicate this either.

But I hope you had a good time!! I usually post in Hellforge Studio's discord server, if you're interested in catching up with news.
Top

Ghost Prototype wrote:The sniper rifle is given as a reward for bringing the shadow some chicken lol. The birds aren't supposed to spawn if you don't have the rifle, but rather small floating enemies. I will have to take a look at the code, since I cannot replicate this either.

Huh... Well that's weird. After i gave the chicken to ghost, it only rewarded me one shock charge that applies on my Shotgun. Couldn't find the rifle around the room.


Spoiler: A Spoiler about how to solve that rusted gate puzzle
And speaking of which, you actually get two portions of chicken. One for the ghost, one for the gate. But the thing is, it stay in your key inventory forever if you use other options instead. And nah, you can't eat it anymore.

But I hope you had a good time!! I usually post in Hellforge Studio's discord server, if you're interested in catching up with news.

Eyup i certainly had a fun time with this TC, alright! Always an excitement to play through this game.
Top

esp when the different demos and updates have completely different starts/intros and areas!

hello. im trying to run this new demo. but i get this error. im running it through the newest GZDoom version. i am on mac, so i am loading each pk3 file seperately, in this order:

here is a screenshot of the error