Please don't put requests here! They have their own forum --> here. Thank you!
19 posts

It doesn't have to be on his shoulder. IIRC, there are sprites of the marine where he carries various different weapons, including the Rocket Launcher. Perhaps you could take that and swap it with its current gun?
Top

That's exactly what I was thinking of. Doing that should be quite possible even for a spriting klutz like me. Available time would be the big issue (hence my invite for anyone else who fancies a go).

[edit]Hmmm... just had a quick look at it. The rocket launcher for the player marine sprites is the right size for the marine sprites but too small for the heavy guy. I tried cutting and pasting the one from frame A of the player onto frame A of the heavy guy and it simply wasn't big enough (quite a few pixels shorter than the rifle that he is already carrying). It just looked too dinky in his hands. So a bigger one would need to be made (presumably from the rocket launcher pickup) in all angles and carrying positions. In other words, it's a bigger job than I thought it would be. 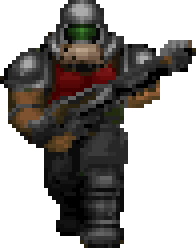 and already I don't like how the butt of the weapon gets confused with the strap from his elbow guard. An easy enough fix though. The hand position at the other end is a bit rough too.

Unfortunately, I really don't have time for a full set ATM. Especially as the angles would take a bit more work.
[/edit2]
Top

Someone has offered to try to swap it but the link in the OP doesn't work.
Top

It's probably just google chrome being excessively fussy about the http link. I experienced this in another thread recently, so I paid to get a security certificate for the site. I've changed the link to an https one. So, with any luck, they should be able to get the file now.
Top
19 posts