I played it today, and I loved it.

Thanks for brightening up my day with awesome.
Top

I've gotten a strange glitch during the "new game+" sequence. While I was busy straferunning in circle and picking up the gazers (cacodemons) at the very end, the grafters (cyberdemons) eventually stopped shooting at me. Once the last gazer was finished, I witnessed this bizarre scene: 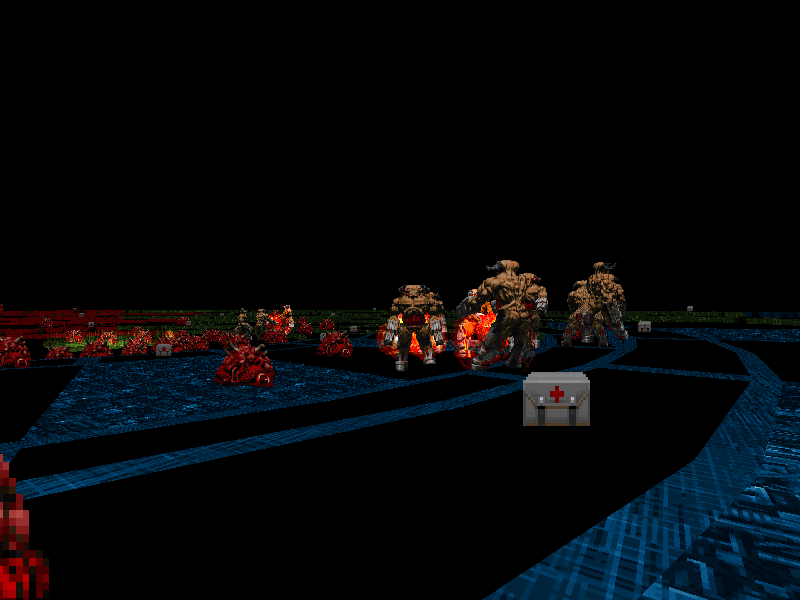 The grafters just stand there shooting each others off. Sometimes I hear a pain cry but they don't seem to actually hurt each other. I kind of don't want to attack them.
Top

Nice to see Xaser still goin' strong, just asking will we be getting any of your new wonderfully crafted music?
Top

Well, that was an experience.

Have to appreciate that blue ( my favorite color ) ended up having what was easily my favorite weapon before the anti-matter driver came into the picture.

Although, I have to wonder, are the grafters supposed to require the anti-matter driver? Not to damage, mind, but to survive. I just seemed to be unable to outrun their homing missiles without using the anti-matter driver's recoil to boost myself. Which has actually inspired me quite a bit, actually ... I kinda want to see something where your only ( or at least primary ) weapon has such tremendous recoil, granting pretty damn impressive mobility if you can angle it right.

Also, the grenade launcher seemed kinda ... absolutely worthless. The only reason I found to use it was in its own section, and only when firing into those occasional holes. Otherwise, I only used it in its own section, mostly because I ran out of ammo for everything else. Feel like it should really have more of a use-case than firing into holes, especially considering that that's relevant in only a single section. In comparison, I used the nailgun basically everywhere and ... admittedly, I didn't really use the fusion mortar that much either, aside from in its own section. I wouldn't be surprised if it's outright better than the nailgun, but the less required accuracy and precision of the nailgun made it much more appealing, as well as the fact that it reliably dealt with anything stronger than the normal birdman as a crowd - since the mortar doesn't pierce through enemies ( it only seems like it does because it kills weaker stuff before it hits it ) meaning that it just sort of acted as a non-hitscan, not-explosive anti-mass driver which you get immediately afterwards if you went in the order I did.

I guess that's really the issue, the mortar seems kinda redundant if you don't get it before the nailgun, especially if you get it last - there's just not really any situations where you want to hit a single target hard, which it feels like it'd excel in ( especially if said single target was surrounded by birdmen, meaning you'd cut through them as the projectile traveled ).

But I did really, really like the blue section, which probably ended up making everything else afterwards feel kinda flat. It just felt like the perfect use case for its weapon that still felt natural, whereas the mortar felt kinda forced ( as shown by the fact that there's not really much use for it over the nailgun afterwards ), and the grenade launcher felt like a gimmick in its own section.

Also, the ambiance was A+. It's also kinda funny how the way to make a pinky's bites more threatening is to seal off its mouth.
Top

You can outrun the grafters' rockets if you straferun.
Top

SR50 or something? Because I was definitely using SR40 as much as I could, and that only seemed to move as fast as the rockets - meaning that any moment where I wasn't getting a perfect SR40, they'd creep up closer and closer.
Top

I was finding that too but to be honest I loved that. Easily the most stressful-but-fun situation I've ever been in playing Doom.

Just straferun constantly. The missiles end up crashing on the ground after a while.
Top

Just loaded this up to try it out. I've noticed right away that the automap is blank. Really not a fan of that... Thank goodness for am_showalllines 1
Top

Ed the Bat wrote:Just loaded this up to try it out. I've noticed right away that the automap is blank. Really not a fan of that... Thank goodness for am_showalllines 1

I REALLY love the music. It encourages me to take a chill pill and access my next move.
Top

Thanks for all the kind comments n' feedback n' such!

Just posted up v2, which fixes a few things. Quick changelog: I think that's all the geometry gaps; if anything else shows up again, lemme know.

Regarding Grafters, I'm probably going to end up reworking that stage of the fight since "more homing missiles!" isn't particularly interesting. For now, try switching directions mid-strafe -- a figure-eight works wonders against those missiles. Spoiler: THIS SURE IS A SPOILER REPLY
Yup, that's exactly how you're meant to reach it.

Gez wrote:I've gotten a strange glitch during the "new game+" sequence... The grafters just stand there shooting each others off. Sometimes I hear a pain cry but they don't seem to actually hurt each other. I kind of don't want to attack them.

Well, this is goofy. I've never seen this happen and can't imagine what could've caused this. Let's hope we don't have any actual ghosts in the machine. D:


Arctangent wrote:Also, the grenade launcher seemed kinda ... absolutely worthless. The only reason I found to use it was in its own section, and only when firing into those occasional holes.

The grenades are as strong as Doom rockets, so they're useful against general crowds. I may increase the explosion radius a bit based on some feedback, but I dunno what else can be done about it. It fills the primary role for a particular area -- just like the nailgun & mortar do -- and using it in later areas is purely optional. Another commenter singled it out as one of their favorites, and the idea is to provide some cool new toys for folks to play with however they like; 'tis the founding design behind the arenas.


Arctangent wrote:I didn't really use the fusion mortar that much either, aside from in its own section... it just sort of acted as a non-hitscan, not-explosive anti-mass driver which you get immediately afterwards if you went in the order I did.

The mortar is a tricky weapon. The idea is it deals continuous radius damage to enemies near the projectile, so you get the best performance firing over folks' heads. It can be used to great effect in the final area as such.
Top

Xaser, your map was reviewed by IcarusLives...

Dat thumbnail, tho. And congrats for being reviewed by icarus, too!
Top

Thumbnail's certainly fitting for this mod, isn't it?