Still, this would be perfect for those something-ops wads like Twilight Warrior.
Reminds me of the olden days of RS without weapons HUD, where changing mags was just symbolized with a yellow bar than an actual model reloading.

Anyway, brb, trying it out to see what happens.

Bleedin' difficult, that's what that do.
Definitely like RS but with hyperspace arsenal and full time lone wolf.
Top

I've added the requested weapon limiting system! You may only carry one of each weapon; I believe the default keybind I gave for unloading and discarding weapons is 'U', so you may want to change that to something more convenient (I personally use 'Q'). Note that if you drop a loaded weapon while you have full reserve ammo for it, you will lose whatever ammo was loaded in it if you pick it back up; I may remedy this in the future by making "Unload" and "Discard" separate keybinds.

Feels much more balanced and playable now that I have to decide which guns I want to keep, based on their accuracy, damage, and the rarity of the ammo they use. Here's a tip: if you're worried about running out of ammo, make sure you keep at least one 9mm gun on you; those little 9mm rounds are ubiquitous.

Oh, and I also added an unarmed option "CQC" in slot 0. Not the most effective choice; try to keep your guns loaded.

EDIT: I'm noticing the weapon limiting system is bugged, at least with regards to shotguns. I'm trying to fix it. AHA. I was accidentally exposing a weapon actor to pickup when I needed to use a special "pickup" actor, causing any USAS-12 spawned in place of a Super Shotgun to be picked up without flagging the player as carrying a shotgun. This will be fixed in the next release. Also going to give players more starting ammo...
Last edited by Josh771 on Sun Dec 04, 2016 9:12 pm, edited 1 time in total.
Top

seem cool, a large amount of guns. I think the mod should remain simple and minimalist, maybe only 1 gun basic centralized
sprites(doom lke). a good exemple: hidden and dangerous delux. 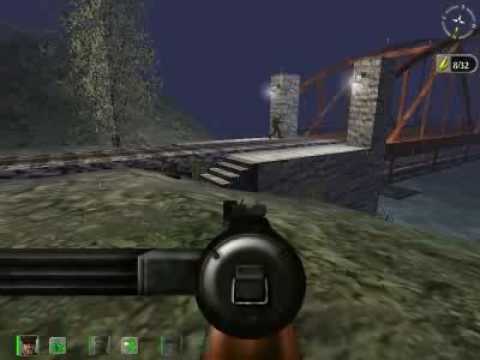 no, its not a 3d gun, its a 2d sprites: just has fire animation, the gun move down(sprite) on reload, simple, but cool.
http://www.myabandonware.com/media/scre ... luxe_4.jpg
a simple muzzle effect. all guns work on this way, i know, on classic raibow six you never see your gun, but for a doom mod, maybe it can work(Hideous Destructor is a perfect example).
Top

Simple works; I wouldn't mind a single image for each gun, some muzzle flash, some Goldeneye reloads. I wonder if I could make centered screen caps of the guns in RS3's editor somehow...

I would love to add legitimate HUD sprites, the problem is that I'd like them to look fairly uniform style-wise, and I doubt that all 53 guns already have artwork floating around. Certain staples of the genre like the AK-47 and M4 are easy to find, but I'm a little hesitant to ask anyone to produce HUD sprites for me because it would be quite the work load. I know I won't be producing them myself; I've got enough code to deal with.

Anyway, I'm toying around with monster replacements too. Anyone that can suggest or volunteer artwork for weapons is welcome to do so; as far as enemies, I'm not entirely certain what theme I want to run with. I kind of like the thought of somehow crossing Doom with Rainbow Six... I dunno.

these sprites can help
https://mega.nz/#!ts0EiR5T!dBWtr4jzLvhr ... -sSqq6afAA
found here:
viewtopic.php?f=37&t=37442&start=0
super shooter series sprites can work well on any realistic mod, these sprites are from super sergeant shooter(google the images).

Those sprites are a definite possibility. I'm not decided yet whether I'll only replace zombies or whether I'll replace all the monsters. Either way, I'm pretty much done working on things for tonight; I've made some progress and I even have some test "terrorist" marines that use a random type of pistol (they won't appear in game, but they are just sitting in the decorate waiting to be uncommented).

EDIT: Okay, so, as of several minutes after posting this, I have uploaded some little tweaks to fix an ammo bug and introduce more gun drops from the possessed. I apologize for working on the mod after claiming to be done for the day, but it had to be done. Now I can rest.

Maybe the next thing on the agenda should be firing modes...
Top

SidDoyle wrote: Anyway, I'm toying around with monster replacements too. Anyone that can suggest or volunteer artwork for weapons is welcome to do so; as far as enemies, I'm not entirely certain what theme I want to run with. I kind of like the thought of somehow crossing Doom with Rainbow Six... I dunno.

You should try some enemy sprites from William Shatner's TekWar, you know WW-Terrorists has those.
Top

Ehhhh honestly the TekWar sprites have pretty limited applications; they only really worked for ww-terror because I was deliberately trying to evoke the "bad photograph" look of games like Lethal Enforcers. Depending on the feel Sid wants to give his mod, he might want something a bit less "We dressed up random people from the office in leather jackets and camo pants" and a bit more "This person is a real life threat and will kill you."
Top

rise of the triad was neat. maybe those enemies?
Top

Updated with firing mode selection for all SMGs, Assault Rifles, the VSS Vintorez, and the USAS-12! Weapons which should have burst fire modes do not currently have the option; only semi-auto and full-auto options are available. There is no on-screen indicator for your current firing mode. The default firing mode of any weapon you pick up is full-automatic - even if you dropped that weapon in semi-auto. You will need to set a keybind for firing mode selection - default 'B'

Also, @Crudux Cruo, I do very much like Rise of the Triad. Plus, if I leave some demons in the mix, we can do some kind of weird RotT/Rainbow Six/Doom crossover... maybe the Triad was responsible for opening the gates of hell?

lol yeah that would be wild.
If anything, there have been alot of tacticool zombies with different weapons released on the spriting carnival and realm667, i'm sure you'll find the right ones.
BTW, this is neat with colorful hell.

one thing to note, i noticed some weapons use mags, and others just take from a bullet pool. i'm just wondering why, exactly. if its a matter of weapons having different mags, i'd suggest an altfire that loads bullets that the player collects into mags for the current weapon the player is holding. If we're going tacticool, gotta go all the way or not at all with the mag system.
Top

Whoa, wait, what? Which weapons use mags? That shouldn't be the case for any gun at all; they should all be using ammo pools, so I need to correct that if it's happening.
Top

I redownloaded this again and did not see any problems. i was playing with the smg class when it happened. not sure what gun it was, perhaps i was just derping out or something. Oh, and any chance of zoom? would be nice to zoom with rifles and snipers.

oh and one added thing: i have a progressive inaccuracy system in my mod if you want to use it. i imagine an acs script would be more code efficient, but my primitive system works well, if you'd like. it would allow weapons to fire faster at a cost, rather than locking them into a set rate and accuracy.
Top

Zoom is planned and will probably be my next goal; snipers will be much more satisfying when you can use the scope.

Thank you for the offer; I remember seeing your multiple fire states once when I was making the silenced Elite more accurate.

I've seen similar systems implemented, and I'm not sure whether I'll use a DECORATE-based system. ACS may be the way to go. I originally wanted to use progressive inaccuracy, but I scrapped the idea when I realized how many weapons I was making. The constants I've used now should be good middle-of-the-road values for representing a weapon's general performance, but in the future I think the micro SMGs especially will be nightmarish to use for any prolonged automatic firing.

I've added zooming to all sniper rifles, and also to the G36K, the AUG, and the L85A1. Make sure you have a Weapon Zoom key bound!

I have added a new gradual progressive firing inaccuracy system to the weapons, which is also affected by movement via an ACS script. Each weapon has its own unique stats with regards to how quickly it will build instability or recover from it. Sprinting while firing an M82A1 .50 sniper rifle as fast you can will only hit something if you're lucky. Damages for all weapons have been completely reworked, as well as some recoil.

Let me know what you think!
Top
191 posts