I think it is mostly supposed to be singleplayer only, due to the cutscenes at the end of every level, but correct me if i'm wrong. But it would look nice, i must agree.
Top

MSPaintR0cks wrote:@Zombie Killer
That only happens in the newest alpha builds of Zdoom. Something with the Skybox Viewpoint is messed up in general in that version.
It works fine in version 2.8.1, the last official one.

Made a little note at the first post of the thread because of that.

I ended up playing in GZDoom. Just beat it and god DAMN that was a lot of fun, it's a fine piece of work you've created here.
So when can we expect a sequel?

This is fun as hell! I love it! this deserves a standalone build

Love the way you make the player have to blow the place up and finding the exit within 10 seconds, it gets me desperate and nervous at those moments.
Have you posted this on ModDB?
Top

typhlosion95 wrote:Love the way you make the player have to blow the place up and finding the exit within 10 seconds, it gets me desperate and nervous at those moments.

Agreed, if the escape tracks was not appeared after pressing the self-destruct button, that would be even more gloomier.
Top

Just finished the game. I only wish it were longer. I stand by my statement earlier that this is simply beautiful and deserves all the love.
Top

E3M6 was my favorite, really, but

Tormentor667 wrote:Took a second run-through and this time also found all the 3 secret entries

E3M6 was my favorite, really, but

Spoiler:
The bad guy told you those were animatronics, and not to hurt them because they were expensive! 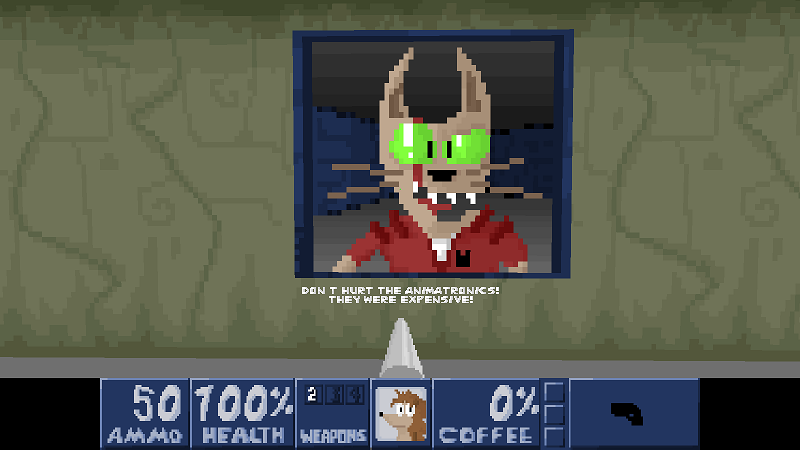 If they actually moves, this secret map would have been a horror surviving map. without dark places and CCTVs.
Top

@Ed - Thanks, I didn't know what anomatronics actually are so I expected them to move

JohnnyTheWolf wrote:It is a shame original total conversions like this one cannot be sold commercially. I would not mind paying a few dollars for it!

But they can! They just can't use the software renderer (gotta use GZDoom-GPL)

If that is the case, then I am surprised there seems to be so few commercial Zdoom games out there.

Things like this make me wish we had a completed projects forum so this doesn't get lost forever.

Speaking of that, have you uploaded this to idgames yet? Other than the "unknown script 6" at the very first level, I've not found any bugs or anything, this was pretty damn solid! Loved all the spritework and effort you've put into this, it's really great!
Top

Just took this for a spin, many delights to be had. Was expecting a standard Wolf clone, but there were quite a few interesting things going on. Won't give anything away but color me impressed
Top

I feel like the entire arsenal was pretty much overshadowed by the golden shotgun. It had plenty of ammo, even on hard, and was generally one-shot-one-kill. The only enemies you couldn't be lucky enough to OHKO were Cat-ptains due to their health (which requires the max damage roll for the weapon) - and, of course, bosses, but at least eight shots did any of those in. In any situation where the golden shotgun was a waste, the regular shotgun was always capable of providing. Conversely, the chaingun is a nice weapon to use whenever you have ammo for it, but it eats your supply way too quickly and bullet ammo is rare enough that it's only worth using in emergencies, and the fact that you need to click-snipe to maintain a good accuracy kills the charm somewhat. I was, however, pleasantly surprised to find that the pistol wasn't worthless. Good show.

Aside from weapon analysis, this is a solid, well-rounded production, and the best I've ever seen in skillful use of MSPaint alone. Its hard difficulty is on par with Doom 1's UV, with few nasty traps and the general ability to kill basically anything you see with the arsenal you have with little trouble. That is, unless they surprise you.

Likewise, the detonation sequence mechanic is a clever idea; it makes the player think less about randomly hitting exit buttons and more about scouting a path to the goal (and all of the hidden goodies), and reminded me of Descent. I did witness a few grammatical errors, but none of them had the potential to be glaringly confusing. E1M1's exit door has an unknown script 6 attached to it.

One final nitpick: +COUNTITEM on the strawberries and sandwiches respectively dropped by plants and tables seems strange, as these random drops augment your total item tally. Granted, they can always be picked up, but if they were placed in the environment they'd feel less like lucky finds your survival sometimes depends on and more like those things you're supposed to be encountering while exploring.
Top

Holy shit, thanks so much to all of you for those comments!

Never expected such a positive feedback!

@Ed the Bat
I never really thought about adding multiplayer. All the levels are pretty much scripted for Singeplayer, and having multiple players running around there would screw up all kinds of things. It would only work when I rebuild all the levels and remove unnecessary lines and scripts. But a nice idea