One issue I have is that in the first mission of chapter 3, when your in the sniper tower, i can't see the bloody guard next to the door, the fog effect thing is obscuring him, now I might just be stupid, but either can you guys fix that or is there a setting which I can change to actually make the guard visible, thanks in advance
Top

I think it might be a draw distance thing. For me, there's a distinct light that you can see with the guard sitting right next.
If you're running with hints on, I believe there's even a yellow crosshairs marker when you're aiming at the guy. I'm not using hints, so there's no marker on the screenshot. 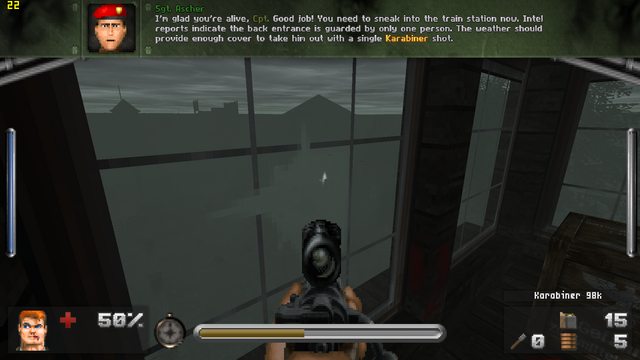 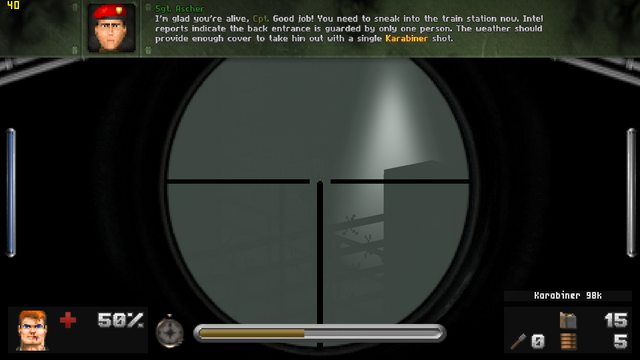 ZikShadow wrote:I think it might be a draw distance thing. For me, there's a distinct light that you can see with the guard sitting right next.
If you're running with hints on, I believe there's even a yellow crosshairs marker when you're aiming at the guy. I'm not using hints, so there's no marker on the screenshot.

ah!, that might be the problem, I will try it out and report my findings, I knew the problem would probably be something on my end
Update: still couldn't see for shit, but I did get the yellow crosshair you described but not the light so I don't know what's going on there, but i shot it, and I checked to see if i had killed the guard , I had but its such a pain in the ass to find that one spot where the crosshair flashes yellow
Top

I have a problem on E1m10 Eisenmann.

If you shoot the sharks in the purple goo the game crashes. 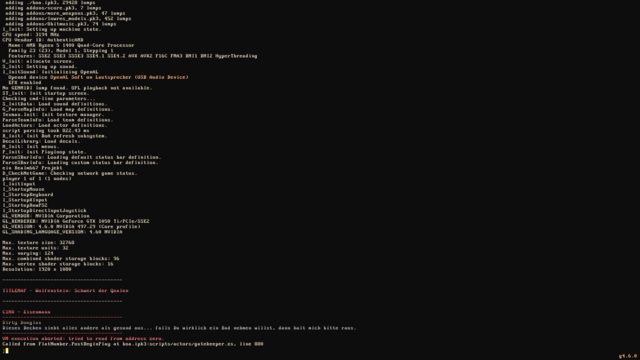 @ButtonBoy - Did you change the standard settings somehow?
Top

Watched the latest trailers and just wanted to once again say that this looks so amazing mate.

Also I forgot to reply to your PM a while back sorry. So I just typed up a reply but sadly it failed and said msging you is disabled. So I copied and pasted my reply into a message to you on doomworld instead so hopefully you get it there.

Spoiler: Replies to the Dev Team on Github

Tormentor667 wrote:@CaptainJ - We might need your help with something: https://github.com/Realm667/WolfenDoom/issues/1101

Sure thing. Maybe i couldn't elaborate more or just made things more complex. Thankfully i had a spare time to go through Episode 1 again and record the videos that corrects said issues. So here we go, the first issue:

Terrain textures playing wrong sounds. As you can see, a few stone bricks and tiles play grass footstep sound effects for some reason, like what i described before. I recorded through every single levels of Episode 1 and eventually will search through Episode 2 and 3.

IDMYPOS is off but i do hope each area is remarkable enough to find them easily.

EDIT: The last part where BJ kicking the poor carpet is to point out that kicking impact quakes, and plays a bit of earthquake sound effect. Just noticed that while playing the game without the music.

More explanation about the first final boss bleeding. As you can see, it REALLY bleeds. As in literal way. See the blood splat flying around.

Also voice during the video is not mine!! I've been playing Vinesauce vid while doing things.

Jumpscare not happening at the Spire Door. It's very weird because i did redownload the standalone version, stood near the door, wait until it closes and i certainly died. Even if most likely does not happen on your end, the door still hurts you if you get hit by a door closing.

Just to be sure, the version of the launcher inside of the Standalone file is GZDoom 4.6.0

Spoiler: And Extra Feedback for Episode 1. Spoilers, IDMYPOS is on. 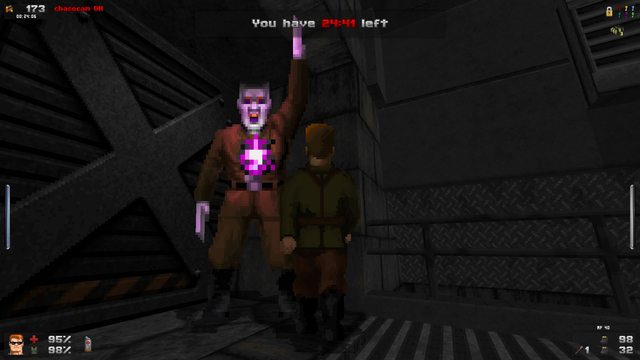 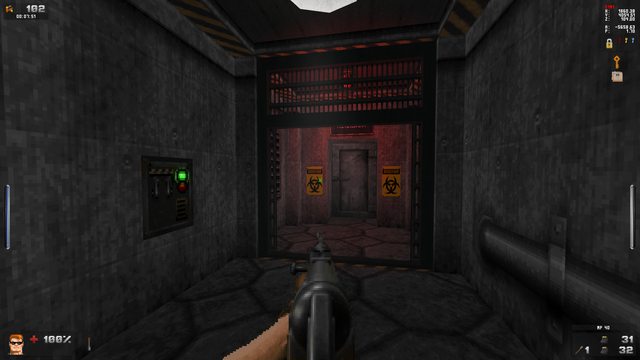 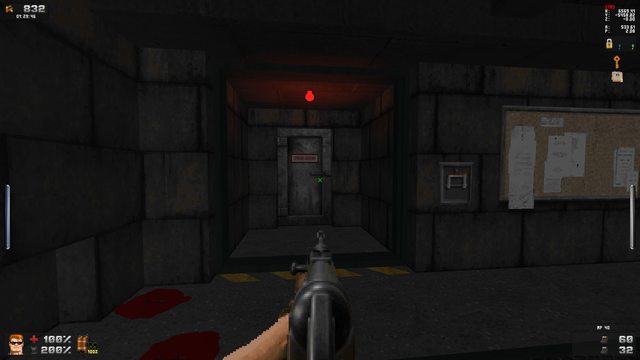 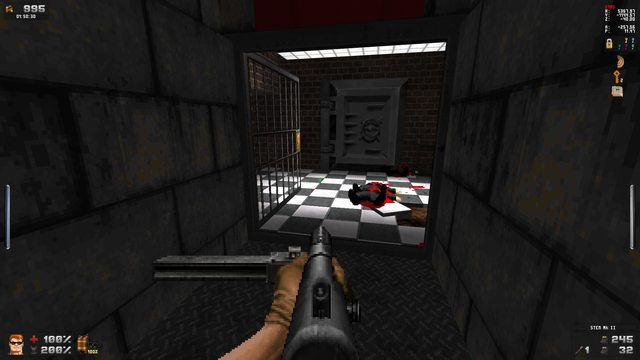 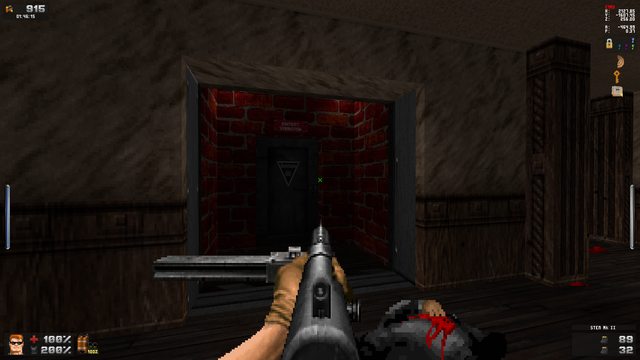 - A tiny gripe of mine, but this Gestapo door can opened although the texture is colored grey, also has lock on its handle. It reveals after finishing the sequence but the tutorial told me that every grey door, or with a lock is always inaccessible. Could be misreading, but just saying.

- Lastly, i have a question. The Explosive Charges that are crucial to destroy Gun batteries play paper rustling sound effect. Other items like Mine Detector plays Backpack sound just fine. Is this actually intended?

Blake00 wrote:message to you on doomworld instead so hopefully you get it there.

I am banned on Doomworld

Just use my email adress info AT realm667
Top

@ButtonBoy - Did you change the standard settings somehow?

No I didn't change any settings, I just brute forced it and sat the there for 5 minutes with the sniper rifle trying to find that flashing yellow circle, I did, eventually but its still a real pain in ass, now I know BOA has a lot more serious issues that should take up your time, but this one is kinda preventing game progression and I would like to see it fixed but its not that big of a problem, anyway mate It's a great game and you and the team have worked so hard on it, It really doesn't deserve half the criticism it gets, cheers and thanks for the hours of fun shootin nazis
Top

Spoiler: Extra feedback of Episode 2 incoming. Spoilers, obviously
At the first part of C2M1 it shows that stealth mechanic of the game is quite half-baked. If you get closer to the enemy then sure, it's your error. But this is the only part where i can't go undetected in first try. What's causing him to see under me? While turned back, even.

Terrain sound glitches in Episode 2. Video size was rather large so i had to put it on Dropbox. 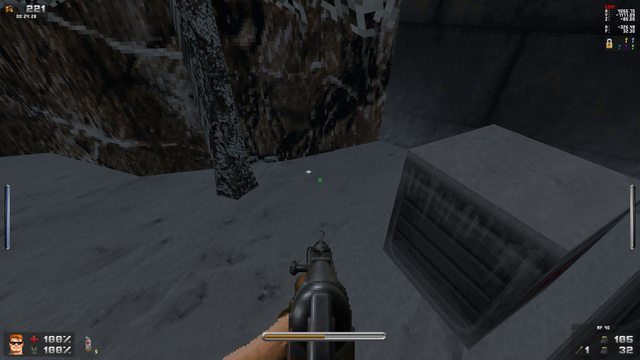 - Looking around the map, i just noticed this little white squire on the ground. What is this? 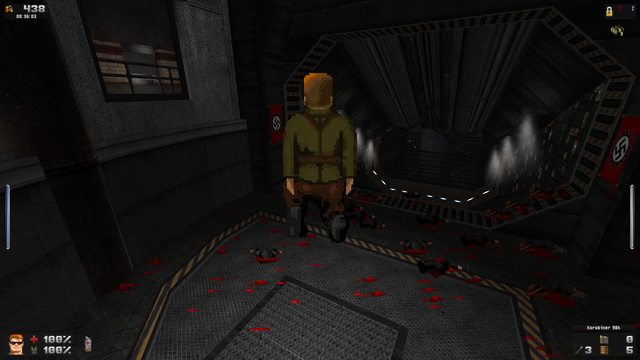 - I also noticed that dismounted mecha still can block the player after being rode, and destroyed. 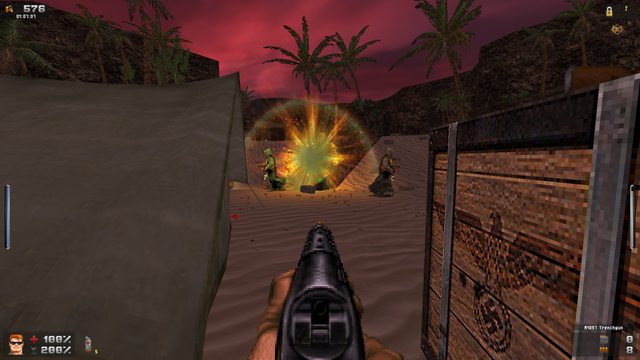 - At the first level of Astrostein, Templars and Nazis really don't hurt each other despite they're throwing grenades around. Well in Episode 1 they killed each other. Should i turn off the god mode or something? 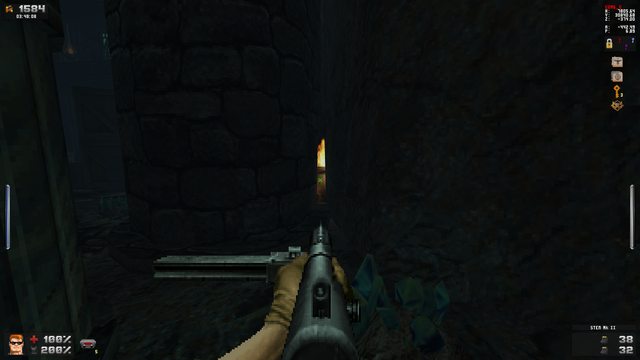 - Noticed this fiery jug inside of this tiny gap.

Still having too much fun in BoA despite how hard this game can be.

After playing stuff like Sneaky Doom, I've pretty much regarded height as non-existent when it comes to sneaking around. With BoA doing it as well, I've noted it as a possible engine limitation instead of anything the devs could do. It'd be nice if you could sneak above/under enemies, though.
Top

Blake00 wrote:message to you on doomworld instead so hopefully you get it there.

I am banned on Doomworld

Just use my email adress info AT realm667

Boy have I missed some stuff haha. Will do mate

@CaptainJ - Thanks kindly for your bug reports. I am collecting all these and sharing them with the team on GitHub - we definitely will fix these!
Top
3204 posts