Ahhhh I was gonna say, the siholette map has the same sort of pallet style with some of them hack's levels. Plus there's a lotta music from that hack that's in Golden Souls 2. It's pretty cool.
Top

I can’t believe it.

One of the first custom maps I’ve ever played (other than the notorious nuts.wad) was The City Of The Damned – Apocalypse. Exploring that incredibly atmospheric map made me realize how great the engine was and how much you could achieve with some imagination.
A fellow friend of mine, Duke_Nume (which you might remember as the maker of some Golden Souls 1 guest maps) taught me the basics of Doom Builder 2.

After that, I’ve made a couple of maps and tried to make a megawad called “Gore”, it was inspired by Tormentor667’s maps and Happy Time Circus. I had plenty of ideas but the end result was not very good, so I ended up abandoning it.
In 2011, Duke asked me if I wanted to join him for a project called Serious Sam: The Retro Encounter, a TC based on Croteam’s glorious franchise. After months of work we made a complete multiplayer experience, with the plan of adding single player maps later after completing all the assets, but the first release was met with mixed results, and we quickly lost interest.

Serious Sam 3 released in the same year,and because of the hype for that game I’ve decided to pick up the project again and remake it from scratch. Duke wasn’t in the team anymore as an active developer but he still helped by giving me advice and playtesting everything.

I’ve continued working on this remake for two years, and then since I was getting pretty slow at mapping I decided to work on something else to blow off some steam, so I came up with the idea of a bright, cheery mapset inspired by a previous test map I made which was set in an Aztec garden and had a relaxing purple-pinkish sky.

The mapset would be known as Golden Souls a couple of months later, and was announced in 2013 after New Year’s Eve. The idea of having a hub was, curiously, not directly inspired by Mario 64, but by another mod I was playing at that time, Unloved. I really appreciated how BlueEagle managed to capture this feeling of exploring an interconnected world, and I really wanted to make something similar to that, but with a totally different theme, and so Mario’s paintings came to mind.

Back when I first started playing Doom mods in 2010, I couldn’t even think of winning a Cacoward, and here we go, 8 years later. I really want to thank everyone who helped me in all these years, it’s been a wonderful journey and I hope to continue making content for this incredible community.
Top

Congratulations! Golden Souls 2 is amazing all the way around.
Top

Truly amazing! And you know, that might not be the only award you'll be getting in your career... so keep it up!
Top

Super Starry Congratulations, and I salute you for releasing great mods like Golden Soul series and Serious Sam Retro Encounter. Both mods are still great to play yet brings me good memories. You certainly deserve The Cacoward and more than itself. You have done a great job contributing to Doom Community. I would like to see more stuff from you in the future, doom-relate or not, doesn't matter! Your uniqueness is now well known, after all!

Once again, i congratulate you for achieving Cacoward. You totally deserve it!
Top 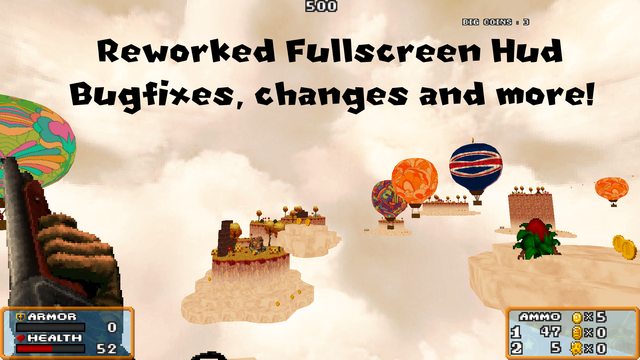 Features some major changes such as enemies having to be in a certain range in order to fire at you, so no more bullet hell at higher difficulties!
Tons of maps tweaked, bugs fixed and there's also a fully reworked fullscreen hud!
DOWNLOAD:
https://www.moddb.com/mods/doom-the-gol ... souls-2-14

3 exits, sorry. I wrote the changelog in a hurry so there are some mistakes.
Top

Features some major changes such as enemies having to be in a certain range in order to fire at you, so no more bullet hell at higher difficulties!

By the way, these platforms can be used also to jump into the cavity.
Top

By the way, these platforms can be used also to jump into the cavity.

Having a bug in the new gzdoom version where blocks can't be pushed down ledges. Tested on Map06 with nothing autoloaded and no other mods, using GZDoom 1.4.2. GS2 1.3 is having the same problem. It prevents the level from being beaten, unfortunately.
Top

WallyTheBoogieBug wrote:Having a bug in the new gzdoom version where blocks can't be pushed down ledges. Tested on Map06 with nothing autoloaded and no other mods, using GZDoom 1.4.2.

I suppose you meant 4.1.2. That should probably be reported in the GZDoom bug section though.
Top
1254 posts