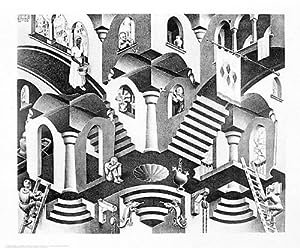 ^ I want someone to make this map when this gets merged into mainstream. :D Would play the fuck out of this map. XD
Top

Anyways, I'm just glad to see that this is still being worked on, non-euclidean space here we come. Wooo...
Top

Setting aside allthe deliberate mind-meltery, what I'd really want from this feature is the ability to make multi-story maps that AI can navigate properly, but aren't a nightmare to stack. (NoiseAlert propagation is also a consideration here!)
Top

Thought about this again today after playing Elite: Dangerous. Would be cool to make a small space colony that loops into itself like a circle.

Would be even better if the portals were at an angle to give the illusion the corridor is curving like a ring, but that one is probably not going to be possible.

Also, wall portals could be used to very easily make complex multi-story buildings/structures without having to fumble around with 3D floors or dealing with the limitations of silent teleporters.
Top

That's outweighed by the performance cost though. It can become potentially framerate-eating if you do it that way versus using 3D floors. Then you'll have monsters checking through quite a number of portals depending on how many portals are between them. The more there are, the more calculations are needed.
Top

Wha...what sorcery is this? Is this software mode only? Or will it work in GZdoom as well?
Top

Rendering a portal is not hard. But I won't do any work on that unless this is ready.
Top

Given that I'm working on the collision part quite slowly, I've made a separate branch from the visual part of the code, merged it with the current master branch and made a pull request with it.
IMO it deserves a separate and earlier pull request than the whole thing since the visual portals can be used in mapping already (even though currently only as windows, but still...), plus there's the new mirror code which enables mirrors on 2-sided lines and doesn't require any space behind them.

I'd say the code is of some relatively good quality compared to the original branch (/portals). Still needs the final word of some of the main developers tho.

P.S. Rendering a portal is actually a bit hard... only in software though lol.
Top

I'll have to review this and its implications on GZDoom first. So don't be surprised if it takes some time as I am rather busy with other things at the moment.
Top

Good to see this moving forward, even if it's render-only for now. Thank you for all your efforts!
Top

Can you make a cvar that limits floor/ceiling recursion? I'd really like to have what feels like an almost infinitely falling tube but that's not possible without infinite recursion happening.
Top

Unsure what you'd do where you meet the recursion limit, though. Solid black? (Ideally, one would camtex it like Portal does. That sounds difficult in this engine, though.)
Top

Portal 1 uses black color after set number of recursions you can change in the options menu. Or maybe it's linked to other graphical settings, you can make two portals to make the infinite hallway and it doesn't show any end, but I absolutely definitely saw solid black color in portal sometimes, perhaps it was because I was too far away instead of seeing too many recursions. I don't know how it is in Portal 2, I never noticed it there.
Top
430 posts