Do you even know what a Voodoo Doll refers to in doom mapping? It's a copy of the Player that specifically in Boom format is used to trigger a huge variety of line actions at the same time through dummy sectors. They have many other uses but that's what they're mostly used for. A huge amount of mappacks uses those, believe it or not.

Give it a try without any gameplay mods first. It's going to be a much better experience that way, plus wait until the entire thing is complete unless you wanna help with bug/balance testing.
Top

I actually didn't know it could also trigger other line events. I thought it was more of a useful trolling mechanic, since anything that damages it would damage you.

I've almost never been one to try out any map "vanilla" XD... I find maps to be a lot more fun when I'm not restricted to the same exact weapons people have been using for well over two decades now.

Though maybe I could give it a shot with Smooth Doom...
Top

Just a small update on level progress, no new maps completed yet but here's some screenshots! I remember playing an old beta of your maps, you are doing a great work, I really had some good fun playing through them, I haven't played them all yet, but I'll play some more when I get another chance

Long time no see everyone! Map19's complete and I should have more time to work on this project now. The aim is to finish it this year, though, with the seemingly increasing map size with each next level, that might prove to be quite difficult. After Map20 I might cut the map sizes a bit if you guys won't mind, though I hope they will be as good as they were up to this point. Still, if you wanna help me playtest the levels, grab the latest version and give em a try! Any help and feedback is appreciated! Just got a little of this...very impressive!

Any news, progress ? checking errday dis top.
Its still remains most awaited megawad for me, reminds me godly Hellbound..
Top

The progress is very slow at the moment because I'm very busy with life and some other, unrelated to doom projects. I did just finish a new level for this project a few weeks ago, but I didn't release it to the public yet. Currently started working on map20. Still got 10 maps left to complete and I hope some of my friends will help me achieve this goal faster.
Top

Great level pack, it's really fun and kinda challenging (especially with brutal doom), can't wait to see what you do next with it.

Alright, here's a new update folks. While I've finished the first secret level a while back, I didn't release it until now! Give it a try and tell me what you think because it's not Wolfenstein anymore. Also, there's a ton of bugfixes, some maps got very slight changes in terms of balance and why am I still talking? 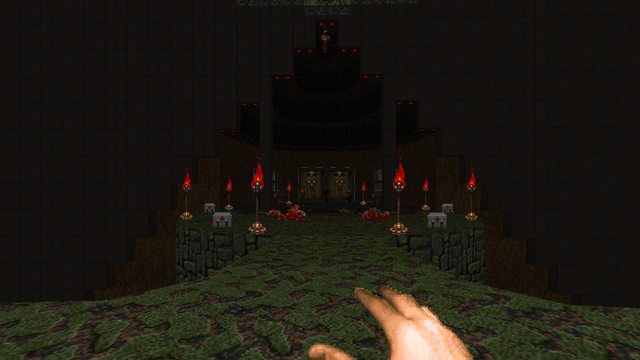 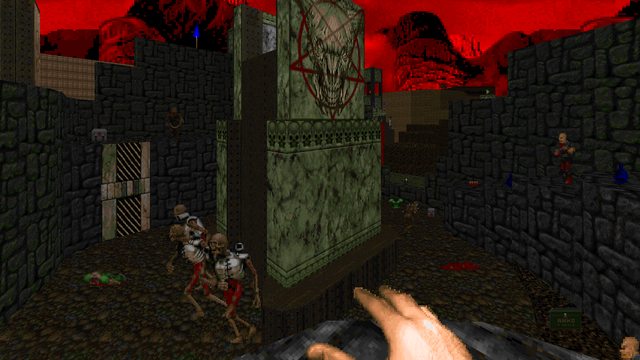 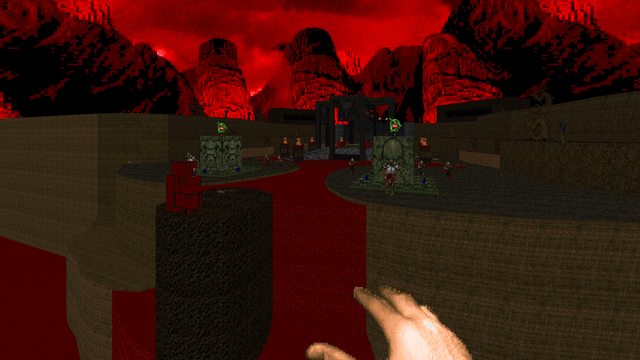 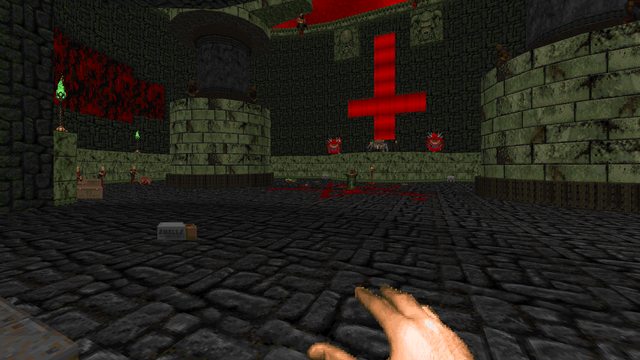 Edit: why are you guys messing around with formatting on this forum.
Top

Curiosity killed the cat, and sent him to hell.
Can't wait when it's completed!
Top


I tried to be cool and pull off sweet moves. I tried

Now I've played through all of your maps (except I have no idea how to get to the Super Secret Level, so I skipped that part). So, now I can leave critiques.

- MAP01 was an excellent intro.

- MAP02 was very painful to play through.

- MAP03 was very long-winded, and the battle at the end was a little too hectic to be fun.

- MAP05 had an interesting intro, but it was easy to lose track of where I was in the map.

- MAP06 had a very nice layout, and reminded me a lot of DOOM Eternal's map aesthetics. Unfortunately, the "Revenant Room", as I'd like to call it, was complete bullscat. Too many Revenants, and they all had the height advantage. On top of that, there were 4 Rapid Fire Troopers, two Barons, and two Mancubi to deal with on the ground floor before I could even attempt to figure out how the hell I could try to fight those pesky Revenants. Eventually I settled for just getting to the Revenant's ledge and killing all of them before dealing with everyone else. And then the final fight in the Yellow Key room had too many Barons to deal with and too little space to deal with all of them. Those two parts wrecked the map, for me... and it's a shame, too, because it was structured so beautifully everywhere else.

- MAP08 was very innovative. I was anticipating what could possibly be done to improve on the Tricks and Traps in the map... and I was surprised to find even more Tricks and Traps alongside the ones I was familiar with. It was awesome! However... I don't know why... but for whatever reason, I found the map to be a bit... melancholic. Then again, that could've been the music (since I was using Doom Metal Pack Volume 4, which sets an unreasonably slow pace to the action for that specific map).

- From MAP09 to MAP14, they were very well detailed, and I loved the fixes you applied to each of them! Still got lost in MAP13, though... like I usually do with the original. XD

- MAP15 was even harder to navigate this time around, but the detail was awesome. I just wish I could've found all the secrets, but I was too busy figuring out how to get to the end. The secret exit was interesting, and a bit amusing.

- I have no idea what MAP31 was attempting to reference, as it said it was supposed to be "a familiar sight". Anyway, it had strong points and it had weak points. It was hard to navigate, and even harder to find any secrets.

- MAP16 had some nice detail to it. A bit challenging, but by that time, I had all the tools necessary to make sure I could handle it.

- From MAP17 to MAP19, it was smooth sailing and a most enjoyable experience. I loved the immense amount of detail there. I think the Citadel is likely now my favorite map of your redesigns, with the Abandoned Mines following close behind!

- MAP23 plays a lot better now, and isn't nearly as creepy as it was originally.

Yeah, that's all I've got to say. Overall, good job! I look forward to seeing what else you have in store!
Top

Hey, thanks for playing DoomKrakken! Glad you enjoyed most of the content this mapset has to offer thus far. Now let's see...

MAP03 was very long-winded, and the battle at the end was a little too hectic to be fun.

Originally I planned to put a Cyberdemon there but considered that it'd be too early. I don't think it's too hectic myself, but I can see that area being very difficult that early on in the mapset, especially on the first playthrough.

It's one of my favorites as well, so thank you!

MAP05 had an interesting intro, but it was easy to lose track of where I was in the map.

It's probably one of the most non-linear levels, so I can see why. There's nothing I can do about it though. I like how open-ended that map is personally.

MAP06 had a very nice layout, and reminded me a lot of DOOM Eternal's map aesthetics. Unfortunately, the "Revenant Room", as I'd like to call it, was complete bullscat. Too many Revenants, and they all had the height advantage.

Yeah... glad I nerfed it a bit this version already. IMO it's much easier to fight Revenants that are above you mostly because most of their homing missiles will most likely just hit the ground. There's plenty of space to dodge attacks there and the level itself has a ton of rocket ammo that quickly cleans them out. You can also use the Plasma Gun as well.

And then the final fight in the Yellow Key room had too many Barons to deal with and too little space to deal with all of them. Those two parts wrecked the map, for me... and it's a shame, too, because it was structured so beautifully everywhere else.

This I can agree with. I really didn't think back then when I designed this encounter at all. The easiest way to deal with it is to just grab the Yellow Key and then run away from the room, then clean all monsters in the passageway leading to it. I could probably make it slightly easier still.

I have no idea what MAP31 was attempting to reference

It's one... actually two of PSXDoom's secret levels in one map. While I've never played the original myself, I really enjoyed the TC that's available on ZDoom. Map32 is planned to be based on a PSXDoom level(s) as well.

From MAP17 to MAP19, it was smooth sailing and a most enjoyable experience. I loved the immense amount of detail there.

Maps17 and 18 were actually designed by Guardsoul, I only edited them slightly later on, to make 'em play even better (hopefully). Guardsoul has done some amazing job working on maps 17, 18, 25 and 26.

I think the Citadel is likely now my favorite map of your redesigns, with the Abandoned Mines following close behind!

The Citadel is definitely a map I put as much effort as I could into. Glad you like it! Hopefully I can keep it up for the final levels. As for Abandoned Mines, that's Guardsoul's level, and it's probably my favorite level of his as well.

Thanks a lot for playing and criticism! I really need to focus more on mapping and release more levels. Hopefully that will happen SOON™.
Top
218 posts