Voxelbro wrote:I'm flattered you posted here! Your software made my work way better and my life easier!

2. yes, it's really a problem and on my todo list

Thanks for your feedback and voxelized doom looks really interesting!
Top

Untitled-1.png
You do not have the required permissions to view the files attached to this post.
Top

currently there is no straightforward way to do that, but still possible. for example :

1. Turn on Loft->YZ for operating on YZ plane, and select Box mode Erase Brush, then you can remove the middle part easily.

2. Then press on the button Edit->Loop->+X to move the model

3. Press the button on the right side of Size textfield to shrink the bounding box ( turn on Line->F to display frame )

4. Press on the button Edit->Loop->-X to move the model back

by the way, if your model is symmetric, it will be easier to mirror repeat it:) Hope it helps
Top

Just wondering since I have a lot of trouble with codeplex, is magicavoxel open source?
Either way it's quite a beautiful program.
Top

Marrub wrote:Just wondering since I have a lot of trouble with codeplex, is magicavoxel open source?
Either way it's quite a beautiful program.

Thanks:) and unfortunately, MagicaVoxel is not ready for open source yet...
Top

Heh, having fun with it

Is there any way to project an image on to a voxel object in Magicavoxel?

I am trying to make a voxel medkit for DeiMWolf. Using the method described in the tutorial, I imported the image of the top of the medkit, which is the most detailed face, into Magicavoxel and used scale to extrude it to the height the medkit needs to be.

The problem is the sides are all just streaks of voxels matching the voxels at the sides of the top. I need to recolour four more sides (The bottom never shows).

How do I do this?

What I have been attempting is possibly the worst, most tedious, and most time consuming brute force method. I ran another copy of Magicavoxel, imported the image I want for the sides, and I have been going back and forth between the two windows manually copying the colour from each voxel in the one window, then painting the corresponding pixel on my medkit in the same colour in the other window. The front of my medkit is 124 x 32 voxels, and it is taking a full hour to repaint a single line of 124 voxels. It is utterly ridiculous!

I do not want to spend ten hours a day for the next three days repainting the sides of my medkit. There has to be an easier way.

What I would like to do is load up images for the sides and project the colours of the pixels on to each of the surfaces. That would be five minutes of work tops, and I would end up with my medkit looking the way I want it to. Maybe something similar to a clone brush in a paint program (i.e. the heal tool in GIMP) could be used.

Does anyone know if it is possible to do this?
Top

What I would do: load the side image, rotate it, and save it as another voxel. Back at your main voxel,expand it so the side fits, and select the side voxel as a pattern and apply it ( Shape->Pattern and the the plus sign)

Thanks. I tried pattern and it really helped. It sure beat the brute force method, and I am really thankful for your help.

Magicavoxel really does need a way of projecting an image on to a voxel object however. While pattern worked great on the flat sides of my medkit, there are a lot of objects where it is not useful.

For example, I imported an OBJ barrel model into Magicavoxel.

It looks great so far, but how am I going to colour it? There are literally thousands of voxels there. 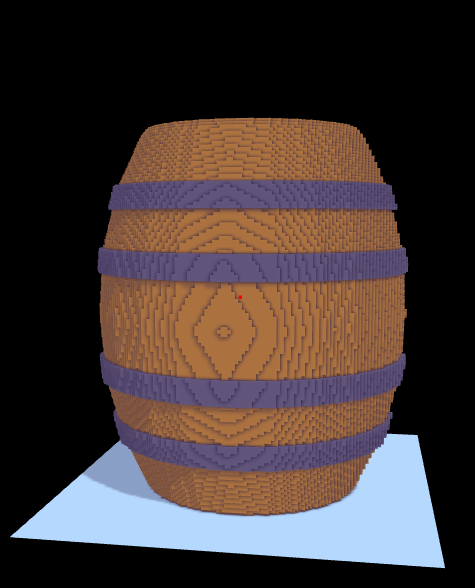 As another example, imagine you are working on a "Shoot Justin Bieber" mod (a potentially very popular mod) and you decide to make the final boss a giant Justin Bieber head. You start up DAZ|Studio and load in the Genesis figure. You apply various morphs to the Genesis head until you get a good likeness of Justin Bieber. Then you export the modified head as an OBJ file and import it into Magicavoxel at the largest size possible. You now have your giant voxel head, but it is all one colour.

How are you going to colour it?

Justin Bieber's mug shots are pretty much everywhere on the net. If you could apply one of those to your voxel head, your job would be over in a matter of minutes.

If you can't, you're pretty much screwed.


Justin Bieber will be laughing at you, and there is nothing you can do about it.

If I am wrong about this, please let me know. I would rather be proven wrong and get my voxels done than sit around getting nothing done.

If I am right, then I suggest we make this a feature request for the next version of Magicavoxel.
Top

When using this program, is there a way you can import your pic and have the program make it into a sphere or cylinder instead of just a flat model?
Is there a tool that can round/smooth corners?
Top

Bump again, so I can answer that question!
It took almost a year and a half of me bugging the developer, but it is now possible to project an image on to a voxel object. 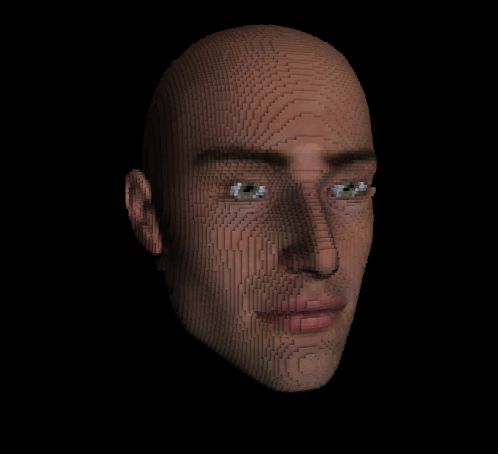 Here's a link to a tweet including a video showing how it is done.

How exactly do you model in a program like this, id think it would be like pixel art but i cant figure out how to carefully (precisely) place the blocks where I want them. Like restricting it to one Z slice at a time like a 3d printer does.
Top

I totally want to get in on this too!