Discuss anything ZDoom-related that doesn't fall into one of the other categories.
102 posts

The last i checked nobody here really wanted to deal with it. I can help to a certain extent but i'm no c++ programmer. I can, however, provide the glsl shader required to get the barrel warping, but i dont know how to go about rendering the screen into side by side parallel stereoscopic 3d.

Here's the fragment shader for the warping:

// In the main; far too many if statements I know..

albiongeck wrote:I think it's a pity but it will never catch on, because very large parts of the population experience motion sickness or have problems with stereoscopic vision that prevent it from working for them.

motion sickness will be reduced as soon as positional tracking is integrated into the rift (right now it has only rotational tracking). The other point is the control scheme: when you use the mouse to rotate in a shooter you will be more likely to get sick than when you just rotate the head. you are not sitting in front of a computer but you are standing in a room and rotating to all the directions in space (rift has to be wireless for this).
Also I have heard that stereoscopic view is in the rift is much better than with stereoscopic 3D displays.
Also latency will be further reduced to fight sickness.
Top

I do think it's a nice thing, I wish they'd catch on, I think I could use one and I do want one when the price comes down. It just doesn't change the fact that a lot of people have eyes that don't work together as a pair in the way required for 3D to work comfortably.
Top

albiongeck wrote:I do think it's a nice thing, I wish they'd catch on, I think I could use one and I do want one when the price comes down. It just doesn't change the fact that a lot of people have eyes that don't work together as a pair in the way required for 3D to work comfortably.

In the short run you are right, but in the long run technicians will find a way to make VR as if it would be like normal seeing - and that is naturally 3D with which noone has problems.
Top

VR is already like seeing with your natural eyes. There is no issue right now with the rift for people who can't see 3d right because looking into the rift is the same as seeing things in real life already. Each eye gets a seperate image, just like in life. There are no two images overlapping like with 3d movies or tvs.
Top

As much as nobody will watch movies in 2d anymore.
I can't tolerate 3d for more than a few seconds so don't ever expect me to invest time here.
Top

The Oculus isn't about 3d. It's about immersion. It's about surround the player in the game. 3D just happens to be used by the device to improve the immersion, and can be completely disabled if the player doesn't want it. However the way that the 3D works on the rift is differently from the way that movies or tv work, so there is much less a chance of a headache happening if that's your main concern.

I understand that there is a lot of concern for just tacking something stupid onto doom, like adding 3d, and strapping to to your face. It sounds ridiculous, i agree. But that's not how the rift works. Personally playing minecraft in it is an amazing experience, especially when you're flying because the ground below you feels like its several hundred feet away. you don't get this from movies or games on a 3d tv. This isn't just some gimmick. I've therefore taken it upon myself to implement the functions required into the gzdoom source code, and will be hosting it online under the guise GSVDoom. I can think of a few thousand rift owners who'd leap at the chance to run through the halls of Deimos in true immersive VR.
Top

If it is about that "immersion" factor, wouldn't it make more sense to use this thing with (modern) games that lean towards realism in their graphics and all than say... a 20-year-old cartoon-ish looking game like Doom?
Top

Sure, but sometimes combining immersion with nostalgia can be a hugely awesome experience. I mean, the Rift mod or minecraft is absolutely amazing, and that game is made almost entirely out of cuboids, all of which are quite cartoony. It's still an amazing experience. One of my favorites.
Top

As much as nobody will watch movies in 2d anymore.
I can't tolerate 3d for more than a few seconds so don't ever expect me to invest time here.

You do tollerate 3D for about 16 hours per day that you are awake. Understand that this is our natural way of viewing the reality in which we are living. I agree that even in the case of the oculus rift the 3D is not perfect. There is still a discrepancy of accomodation and focusing of the eyes: You are focusing into infinity but you are accomodating the eyes to objects that can seem quite near. And this can cause problems for people. I have heard though, that the 3D in the Oculus Rift is much better than with 3D-Displays, e.g. because there is absolutely no ghost picture. But I also never tried oculus, so I cannot say myself how I would react to it. But I am convinced, that technical solutions will be found in the future, so that looking in VR is no difference than looking in reality.
Top

Oculus Rift ... sounds cool. Maybe finally you can sleep without pills with a program... the dream of waking up inside a game, at least visually, may come true ...

I suggest you better stop. First, real Vision and the fake 3d from movies are hardly the same thing. Second, some people have vision problems that make it impossible to tolerate that for an extended period ic time. So please do not pretend you know better than those people.
Top

@Graf, I understand where you're coming from, and I understand that this is something that you don't want to add to the source. But i can guarantee you that what Blazko has said is 100% true. The Rift is not the same as the fake 3d from the movies, the 3d in the rift works the same as natural 3d. The major cause of headaches while viewing 3d movies is how they handle separating the images. Both images are stretched across the same screen and filtered apart rather poorly using glasses that not only dim the image, but also create an effect called crosstalking, which you can see here:

This can lead to much discomfort after a matter of minutes, often leading some viewers to completely remove the glasses and just watch the film in 2d.

However the way that the rift handles 3d, which isnt even it's main feature like i've said, is by completely removing the possibility for crosstalk. It does this by making each image take up it's own screen real estate, and completely blocks each eye from seeing what the other sees. Take a look at the following image: 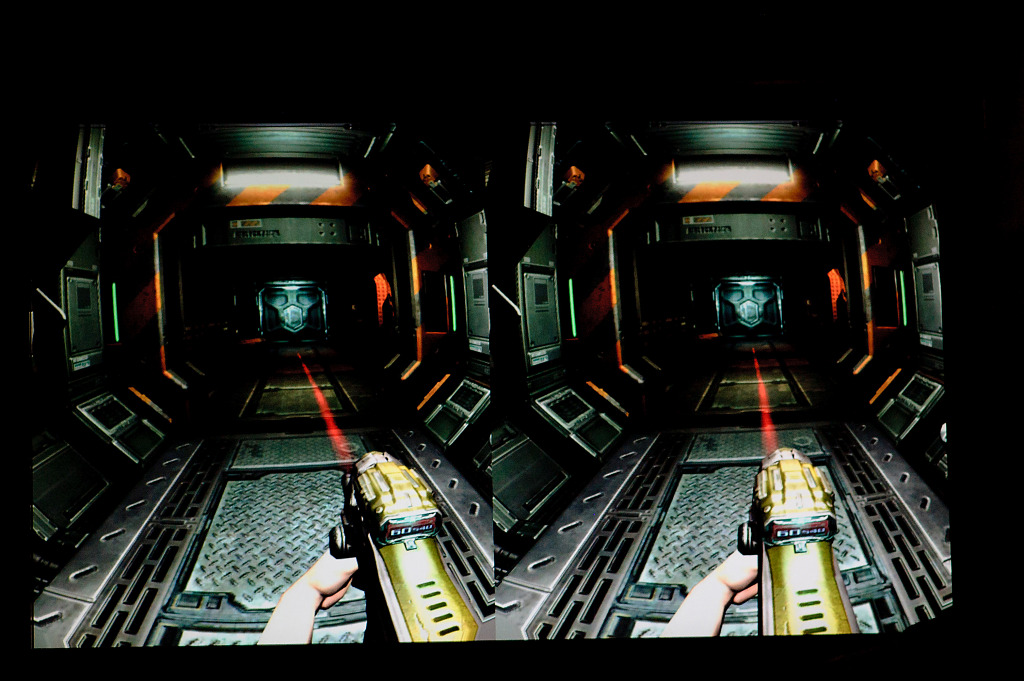 You can see in this image that there is no image overlapping, therefor your brain wont have to try to separate them, as they already are. Using the fish eye optics in the Rift, the images are blown up to fill 110 degrees of your vision, essentially making it seem like you are looking into the environment through a small pair of aviator goggles. The effect works so well that users are able to convince themselves that their bodies are moving while they are playing games in it. Falling in the rift will make your heart sink. In fact the Rift is so effective that Doom creator John Carmack himself has personally vowed to get Doom 4 properly integrated into it, as well as other future projects. In fact for a while, people believed that it was Carmack himself that created the Rift. Here's his E3 2012 reveal of the device, where you can clearly see how positively he feels about the device, and keep in mind this is the first prototype, what I have sitting next to me is even better:

On top of how Carmack feels about it, Oculus also just got a 16 million dollar investment from venture capital firms Spark Capital and Matrix Partners.
Top

The big problem, to me, is that Oculus Rift is not cheap. At all. It's not something that Joe Average Gamer can afford to just buy on impulse from Amazon or the like.
Top
102 posts