Just out of curiosity: What's the difference between the GZDoom and Zandronum version?
Top

Lots of things starting from DECORATE support, non-existance of ZScript and other lumps being underdeveloped yet.

In a Nutshell: Due to Zandronum still having to catch-up the entire features GZDoom has, i have to keep the code "in a between" of the two, i use certain things that GZDoom have but also not hard to adapt to Zandronum later such as few unsupported actors flags.

Alright, is there any way to play the map pack with its changes (monsters, their behaviour and map-crucial items intact) amon with a different gameplay mod like Guncaster or Russian Overkill?

It would've been great if there was a "neutered" version of the mod as in maps, monsters and other crucial stuff described above that would allow it to be loaded with the other gameplay mods that do not alter monsters.
Top

Recently i have been thinking in split the monsters from the core mod as well, that will take a time to make as for more organized i tried to leave the code, there's alot of things that i have to deinterlace to make everything working on its own.

About the maps i can't do the same unfortunately, they were made with the core mod in mind, with that mechanics to be used, you are not the first asking me this, but for more that you wanted to see how this will looks like, i can say it would be the same of using drivers that does not match the hardware, nothing will work the way intended because this was not made with vanilla doom as gameplay as most maps do, that's the point of a Total Conversion.

If you want to play maps like that ones that all i can say is to you just wait because those are meant for this mod, but in the future i can makes another maps with this same visual and architeture but for vanilla doom so everyone can play them the way they want it.
Top

OBOIS, Version 2.9.2 has arrive AND alongside it, the Dungeons update, hopefully all issues has been adressed (at least Dark Matter Gun doesn't instakills Veltanir anymore).
Top

Well fellow players, after a while pondering about this, this is mostly sad news but i will be scrapping Baerhon's Lair Part 1 and 2 from the Map Pack, full details in the log i posted in ModDB: http://www.moddb.com/mods/hunters-moon/ ... tober-2017
Top

The Lair Maps are still going to be downloadable, correct?
Top

I can make the favor of release them separately like Akzos City tho, since they will not be bound to Hunter's Moon anymore.
Top

HOW DID I NEVER SEE THIS?!

Ok, anyway, would you be able to make the Lair maps "vanilla" compatible (as in, playable with standard weapons/monsters/items), since they won't be bound to Hunter's Moon?
Top

Okay waiting for the upload in MediaFire was like: 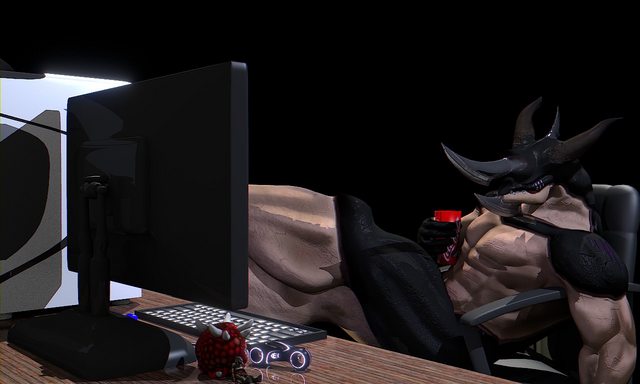 But here we go, Version 2.9.3 has arrived! Now six additional characters have abilities, changelog and download in first post, enjoy!

Beautiful and efficient polygon work! It even runs pretty well on my rinky dinky machine!
Top

Hello, I'm getting black squares with blood on them instead of gore (https://a.pomf.space/uvoxpbleprkp.webm). I've tried fiddling with the clipping options, to no avail. Any idea?
This is with gzdoom 3.2.1 and HM 2.9.3.
Top

Seems a problem of outdated drivers.

How old is your GPU? I remember that there was a version of GZDoom that had this problem on the engine side, however Graf managed to fix and now whenever it happens it is because the GPU is kinda old.
Top

That shouldn't be the problem, I'm using a RX580 with mesa-17.2.6 on GNU/Linux. I remember it working when I was using a 7970, some time ago.
I should also add that all the other GL using programs and zdoom mods work perfectly.
Top

This could be an issue with OpenGL 2.1 support in GZDoom...
Now, why would that matter for a GPU that supports GL4.5? Simply because Mesa is absolutely autistic and sets the default OpenGL profile to 3.0 instead of 4.0 or the highest the card supports. Since GZDoom's minimum requirement for the modern GL3+ renderer is OpenGL 3.3, it gets kicked to the legacy OpenGL 2.1 renderer.
This WAS supposed to be fixed/handled in GZDoom's side, but maybe the fix doesn't work for all GPUs or all versions of Mesa. Try forcing Mesa to use the OpenGL4.5 profile and see if that works.
Maybe this will help

Shouldn't be one of those occasional AMD driver bugs, since you're using Mesa (hence why I think it might be what I said above). But maybe it could still be that somehow, who knows.
Or maybe Mesa's support for your GPU is broken, somehow.
So yeah, this is most likely a driver bug of some sort.
Top
464 posts