The official "ZDoom on Linux" thread.

Forum rules
Please don't start threads here asking for help. This forum is not for requesting guides, only for posting them. If you need help, the Editing forum is for you.
798 posts

I'm getting this error:

@bingojohnson:
The crash log is mostly irrelevant.
> At least OpenGL 3.0 is required to run GZDoom.


That's your problem, though it's a bit odd as (a not that) recent mesa does support OpenGL 3.0 on integrated intel.

Technically, this shouldn't prevent vid_renderer=0 from working, but chances are init order is wrong.

Also, I won't bother to check that hash, just tell you that a bit back (a couple weeks or so, IIRC) GZDoom changed ini file name to gzdoom.ini.
Top

Thank you, VoidMage.
I've compiled GZDoom 1.8.9 and now it's working flawlessly. It reads configs from ~/.config/gzdoom/gzdoom.ini
GZDoom v2.x is still not recognising vid_renderer=0. I've tried recompiling it and reinstalling MESA, but the error persists.
Top

bingojohnson wrote:Thank you, VoidMage.
I've compiled GZDoom 1.8.9 and now it's working flawlessly. It reads configs from ~/.config/gzdoom/gzdoom.ini
GZDoom v2.x is still not recognising vid_renderer=0. I've tried recompiling it and reinstalling MESA, but the error persists.

What's the point of using GZDoom (instead of plain ZDoom), if you're going for vid_renderer=0 ?
Also, how exactly are you setting that var ?

VoidMage wrote:That's your problem, though it's a bit odd as (a not that) recent mesa does support OpenGL 3.0 on integrated intel.

Depends on the exact Intel GPU. I believe you need Intel "HD Graphics" for OpenGL 3. I think you're thinking of Linux having OpenGL 2.1 for more Intel graphics processors than Windows (going back to 2004 IIRC whereas Windows only goes to 2010).
Top

@bingojohnson: as such, never mind; stick with GZDoom 1.8, or just use plain ZDoom on that machine.
Top

@VoidMage:
There are some mods that I play on OpenGL since the experience is better, but the majority of the time I play on software renderer. I guess I'm stuck on 1.8, as I only have OpenGL 2.1. Not a problem tough, since it works just fine on my system.
Top

In case it could help someone there is a package of gzdoom that can be installed automatically on ubuntu/kubuntu(and other ubuntu flavors) that don't need to be manually compiled.

Link to click(an image worth 1000 words as they say 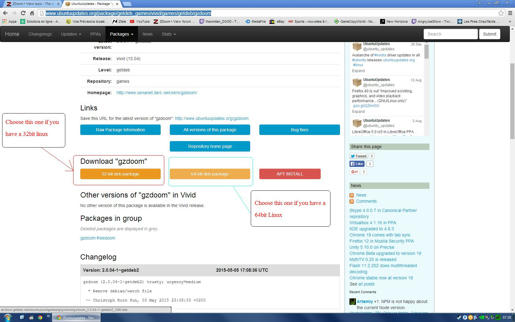 The package is a .deb so once it's downloaded you just have to double-click it and it will install automatically. You will have to put all iwads in the gzdoom folder for it to launch a mod properly. The install folder is in "home/username/.config/gzdoom" and can be seen if you have the "Show Hidden files" enabled. You can put your mod wherever you want but first you have to right click a .pk3 file and open it with gzdoom for the file association. Once it's done all .pk3 files would be opened with gzdoom and the usual gzdoom window will appears and you have to choose with which iwad you want to play the mod(Doom, Doom 2, TNT or Plutonia). Then the mod will launch as it does in Windows.

BTW if you have music troubles and get an error message related to MIDI it's because FMOD can't play the music so go to "Option => Sound Options" and change the MIDI device to Timidity++ or anything that is not FMOD. Personally i'm using Timidity++ and the music works fine so it should be working for you as well.

On a side note, i just discovered that the .deb archive of gzdoom only 2 days ago after i had troubles compiling the source package the old fashion way via terminal. I had to undo everything i've done in order to have a system working well again. Anyway now it's working flawlessly.

Now if someone could create a .deb archive of ZDL to launch multiple mods like the Windows version it would be great.

I hope it helps

NOTE : In case that could be relevant my linux is Kubuntu 14.04 LTS. Kubuntu 15.04 has some plasma-related bugs (Plasma 5 is buggy is freeze KDE as soon as an update popup show up and when it's not freezing KDE it slowing my PC so much i can't do anything for at least 10 mins - no joking here).

EDIT : Correction for the gzdoom path have been made ... for Ubuntu/Kubuntu users

The correct patch is ... : /home/usernamehere/.config/gzdoom (obviously "usernamehere" is replaced by your own user name)

Sorry for the mistake

EDIT 2 : I just found a great doom launcher for Linux on this forum. Well to be honest i came around that one about a year ago but i completely forgot about it and since at that time gzdoom wasn't working on my Linux.

Many of you probably already know about this one : Zereb's DoomLauncher. It can be a bit tricky to setup if you don't know where the gzdoom executable is. You have to look into the root folder and from there it's /usr/games/gzdoom. Once you choose the gzdoom executable file and setup the IWADs folder you are good to go.

Great thanks to Zereb for his great DoomLauncher that works perfectly

So a stupid question . . . I did install what Endless123 linked too, If I try to start gzdoom I get: Something went wrong!
If you haven't installed any Doom IWAD files yet or if GZDoom is unable to locate them, put the files or symlinks to them in '/home/dlf/.config/gzdoom' or start the game with the command 'DOOMWADDIR=/path/to/iwadfiledir gzdoom'. . . . So where do I put the files (IWAD? pk3?) I'd presume something like: /home/dlf/.config/gzdoom. And how could I get Wolfenstein 3d/SOD/Quake working with (G)zdoom. I'm on Linux Mint 17.2 with cinnamon (as the desktop environment) if it matters.
Top

These guides and threads seem to forget one thing ; http://www.fmod.org/download-previous-products/
The end user needs to register and log in to to FMOD its website to download the API....

But the wiki covers this and links to a downloadable version (for as long as distro's dont break it by changing) ;
http://zdoom.org/wiki/Compile_ZDoom_on_ ... OD_package
Top

FireFish wrote:These guides and threads seem to forget one thing ; http://www.fmod.org/download-previous-products/
The end user needs to register and log in to to FMOD its website to download the API....


That's a recent change that didn't apply when the guide was written.
I'll be blunt here: That's an entirely unwelcome change. If I could decide this would be the time to remove FMod support from ZDoom and fully go OpenAL.
Top

Well, as long as the issues with stereo sounds are fixed in some way...
Top

Well, the most simple way would be to effectively ban stereo for positional sounds one level above - that is not in openal part, but in the generic code.

As I've noted, even FMOD downmixes it to mono first in such case, so the engine should just make that official.

But that would need some way to distinguish between positional sounds and the music at that point...
Top

VoidMage wrote:As I've noted, even FMOD downmixes it to mono first in such case, so the engine should just make that official.

How? The high level sound code knows almost nothing about sound formats and simply cannot do it on its own. It also can't determine if a sound is used for positional 2D-play (as from the consoleplayer) or as a positioned sound in the world, and on top of that the same sound can be used for both.
Top

Well, I don't know, yet (to sum up the previous investigation) FMOD in case of multi channel sounds simply played each channel independently if positioning was requested, which resulted in the need of that sort-of downmix volume hack in StartSound3D; openal in such case simply refuses to position, so the sound needs to be actually downmixed before being fed into openal device. What could be a potential problem here, is that as simple as downmix stereo to mono is, it might not be fast enough to put in StartSound3D...though I might be wrong about that. Though the catch is the format of the buffer is set at loading the sound, where there's no info yet whether the sound will be for 3d positioning or not.

Though, maybe it's just a mater of resubmitting the buffer after downmix...yet again, won't that be too slow ?
Top
798 posts