The red menufont from the original Duke3D 1.3D retail release is clearly superior to the one used in later editions. Characters are slimmer, highlighted and much easier to read. Not only the game menu, but also the alternate fullscreen HUD from EDuke32 profits from this since all stats numbers will look significantly better.

If you don't remember what the classic font looked like, here is an example: 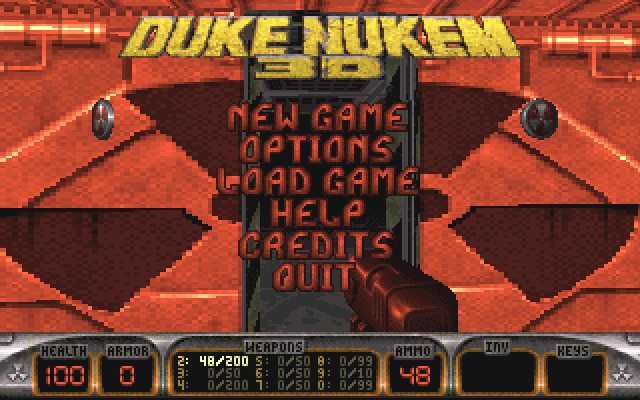 All characters have been imported from duke3d.grp 1.3D, stored in .art files to make a very simple drag-and-drop solution possible (not even a .def file is needed). I have chosen file names so that you shouldn't experience conflicts with any other groupfiles or mods. On top of that, I have added the dash (-) character (tile #2929, originally made by SwissCM for the 8-bit redfont in the Duke3D HRP) which was missing in the 1.3D art to make sure the character set is complete. The other good thing: This should also work in any other port, e.g. EDuke32 or Rednukem.

Needless to say, it's autoload material and meant to be used as such. To pull it off, place attached duke3d_font13.pk3 in your Raze directory and put something like this in your ini:

(File path may differ on your system, depending on where you put that file within the Raze folder. Here, it is located in a subdir called "mods".)

Duke would probably say: "Aaaah... MUCH better!"
You do not have the required permissions to view the files attached to this post.
Last edited by NightFright on Tue May 04, 2021 12:05 am, edited 5 times in total.
Top

Did you read my my mind?
That's exactly, what i want.
Many thanks!

SwissCM variant updated with palette fixes for numbers 1, 5, 6 and 7.
Top

And one last update for the SwissCM font, fixing chars I, T, Z and !. All chars of the tileset have now been checked ingame and work properly with any palette.
Top
5 posts • Page 1 of 1