There is a fork of QZDL that works with linux including "close on launch" bug fixed.

Kyotra wrote:ZDL could use an update that acknowledges the new .ipk3 file extension, can't even launch Simon's Destiny with it.

You want to add an ipk3 to the IWAD list? You should be able to select the "All Files (*)" filter in the Add IWAD dialogue.


Kyotra wrote:Also how in the fuck has a key utility like this not been updated in over FOUR YEARS? The past year has seen several issues pop up with this app and no one has acknowledged it.

Because the original author is very rarely around here these days, no one is working on it and no one fancies doing it? It's almost like it's a hobby project that no one is getting paid for.

You're right though, it is a key utility and an update to fix the few minor niggles that have appeared along the way would be nice - if someone fancied doing it. Personally speaking though, I still find it very functional as it is, and I think that it's still the best launcher available.
Top

Is there a limit to how many source ports you can have in Settings - Source Ports/Engines?
Top

Beezle wrote:Is there a limit to how many source ports you can have in Settings - Source Ports/Engines?

Just wanted to point out that I made yet another ZDL fork, and you can already download and try it yourself: https://github.com/lcferrum/qzdl/releases

It's not intended to be some kind of total rewrite or refactoring fork. I won't even try to migrate it to Qt5. I think that community actually just needs up-to-date version of ZDL with long standing bugs fixed, which my fork intends to provide. For now it's Windows-only release, but I plan to also make Linux release in the future.

Notable changes, additions and fixes in this fork: Full changelog is available at GitHub.
Top

Thanks for this. It's nice to have an update.

Obviously I haven't had much time to test it in anger but it seems good. The changes are nice and subtle and still keep the basic core idea of ZDL as a simple, functional launcher that does what it needs to: allows you to add files; gives access to the command line and doesn't get bogged down in all the bloat and cruft of so many other so-called helpful launchers that try to do far too much and end up being such a complex mess that they hide the basic connection between launcher and game.

For some reason, the first time I ran it, nothing happened for about a minute (the little windows circular "I'm doing something" cursor appeared). Since then it's been fine. I have noticed this with programs that I haven't run before on previous occasions though. I think it could be my anti-virus calling home to check a program that it hasn't encountered before - so possibly nothing to do with ZDL itself.
Top

BTW, I would be grateful if someone could update links on ZDL wiki page here to point to my fork release page. I'd do it myself, but I can't neither register on the wiki nor PM someone here.
Top

New ZDL build is almost perfect for me, just wishing for checkboxes in "External files" to be able to choose which of the added files are allowed to be loaded.
Top

NightFright, actually similar functionality is already implemented. I experimented with checkboxes and honestly it looks ugly. Instead, in current version, you can double-click any file in "external files" list and it will be "disabled", i.e. not allowed to be loaded. You can also select all the files in the list (Ctrl+A), press "up triangle" button and all the selected files will be "disabled" (assuming that previously they were all enabled) - now you can double-click any of the files to make it "enabled" again.
Top

Just wanted to point out that I made yet another ZDL fork, and you can already download and try it yourself: https://github.com/lcferrum/qzdl/releases

It's not intended to be some kind of total rewrite or refactoring fork. I won't even try to migrate it to Qt5. I think that community actually just needs up-to-date version of ZDL with long standing bugs fixed, which my fork intends to provide. For now it's Windows-only release, but I plan to also make Linux release in the future.

Notable changes, additions and fixes in this fork: Full changelog is available at GitHub.

The only things that come to my mind to improve this even more would be someting like a 'pwad library' as in ZDE , viewed as a file tree for easy selection of wads , instead of using windows open file dialog every time choosign a new wad

One other idea is like an optional side windows which would view the .txt file included in the wad folder , like the one in Winrar which shows .nfo files automatically when you open an archive , would help easy identification of wads

Thanks a lot and have a good day
Top

ClessxAlghazanth, thanks for the feedback!

As I see, you need something like a library view that you can use to quickly add WADs. I'll look into it in future versions, but for the next version main goal is to make Linux release plus some general UX improvements without major refactoring.
Top

SOMEWHERE, I found precompiled binaries for linux and they worked great! However, I lost them after my install was corrupted somehow and now I can't find them... I'm new to linux (kubuntu), what's the most straightforward way to get zdl/qzdl back on my system?
Top

Well, you have several options. Linux version of my fork is still WIP, though it's in working condition - you can compile it yourself using Qt 4 toolchain w/ Qt Creator (sources are here, compile using .pro file) or wait for the next weekend, when I'm planning to release new version including pre-compiled Linux binaries. Also I believe that you can find pre-compiled Linux version of some outdated ZDL release somewhere on the net if you google for it, but it's not guaranteed to work with your particular Linux distrib.
Top

A bit late, but it's time for 3-1.1 release! Download it from here. As promised, this release includes Linux binaries for both x86 and x86-64 architectures. Other notable things in this release (for all changes and fixes see CHANGELOG):
Top

Thanks for the update, I'll grab it when I get home. I've been using the previous version since February now with no real problems at all.

[edit]
Got the new version - so far so good.

Something that I have been meaning to ask, is there an alternative symbol that could be used for this button? 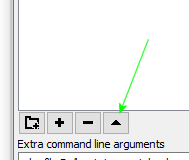 That triangle/arrow shape doesn't really say enable/disable to me. I know that there are also move up/move down buttons but the look of the above highlighted button also looks like it might mean "move up".

I'm not sure what would be a suitable alternative but maybe "+/-" or a tick mark or something else if its possible to do that?

e.g. something like any of these (but probably neater-looking) would be more suitable IMO.