I've seen GzDoom screenshots where a high light intensity can make the affected surfaces to become very bright and white, such as in this screenshot:

Yet, when I stack a huge amount of lights in an area in my game, I only get this: 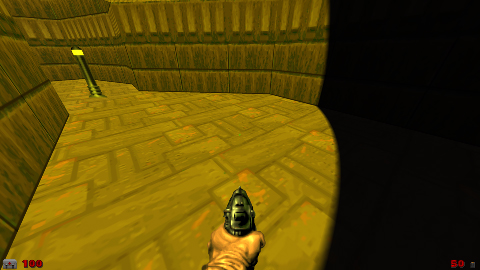 In dynamic light options, I've tried toggling "Clip lights" on and off, but something must be wrong, because it doesn't seem to make any apparent difference whatsoever, not even in an extreme scenario such as this one. Are there any other related options or measures I should give a try?

Do you have bloom enabled?

You have to use the GL renderer - setting is 3/4 the way down the Options/Display Options/OpenGL Renderer option menu (or set the 'gl_bloom' cvar to true in the console.)

D2JK wrote:Yet, when I stack a huge amount of lights in an area in my game, I only get this:

The total sum of light allowed by the GL renderer is 1.5x that of a fullbright texture. Stacking multiple lights therefore will not brighten the area further. However, if you launch the software renderer you'll notice a different behavior, which is probably closer to what you had hoped for.

The BoA screenshot relies on the fact that the ground texture is almost white in a dark scene with the bloom pass enabled. In such a situation the bloom pass will most likely start to bloom the area.

Ah, so that's the problem. I was aware that the ground texture in the first screenshot is pretty white to begin with, but I figured the end result is beyond fullbright... but now, the 1.5x cap explains everything. And yes, the software rendering was closer to what I expected.

Bummer. I suppose this won't be addressed in any way in the future, either? Would it be possible to make the capping factor to depend on a console variable?

Ideally the capping factor should be part of the texture's material. For some stuff it makes sense to cap at 1.0 but for other 2.0 may be better, but without a working material system it's a bit hard. You also should not forget that for textures that contain colors the necessary clipping may lead to discolorization.

Yes, in software rendering I was getting false colors in overbright areas (until I disabled "Software truecolor mode").

The effect I'm interested in is best illustrated in these Unity engine screenshots. Even a texture with somewhat dark colors originally, is allowed to clip to white.