The crossbeams are the single biggest problem. Replacing them with 3D floors makes my computer go from <60 fps to above 85.
Of course, if the rest wasn't so detailed, this would matter less - but these can make up 1/3 of the scene's rendered linedefs.
Regarding monsters, on this map there aren't that many, and more importantly it's all stock AI. The map is well playable on a decent system.

It's still a good example of how *not* to make a map, though, no question about that.

Here's a lower-end setup from a few years ago. Intel i7-8550u, onboard graphics, in a notebook.

If I get the chance, I'll also try to run it on a little NUC I've got with an i7-1165g7. That one might be interesting because it should be representative of the current wave of onboard graphics in laptop and tablet devices. I haven't tried running GZDoom on it much, but I do remember it being quite glitchy in Vulkan mode, probably due to Intel's...questionable graphics drivers. So, unless they fix that, anyone with one of those is probably better off running OpenGL or OpenGL ES.
You do not have the required permissions to view the files attached to this post.

That one's interesting, I would have expected a bigger advantage for Vulkan on it.

Here's the last one I've got. It's a Core I7-1165G7, which is interesting because it has the latest generation of Intel's onboard graphics, using the "Xe" architecture.

Vulkan appears to perform the best here, but is totally unusable because the floors and ceilings are just completely missing, as if they're totally transparent. The other render modes appear to work fine, though. I can only assume this is the result of more glitchy graphics drivers from Intel, since Vulkan appeared to work on the older Intel IGP I posted earlier, and obviously works great on that Nvidia GPU I posted first.

Note that this particular 1165G7 is in a NUC with a fan, and I've got the "configurable TDP up" setting maxed. It probably performs worse in applications where an OEM is trying to conserve battery life, since it won't clock as high for as long.
You do not have the required permissions to view the files attached to this post.

My laptop is ancient and I was sure my OpenGL version was going to be 3.x but apparently it's 4.5, go figure. Darkest Hour for some reason causes GZDoom to crash after a few seconds, but not LZDoom.
You do not have the required permissions to view the files attached to this post.

On an AMD FX 6300 and GTX 550 TI. I also had crashes with Darkest Hour with GZDoom. I went ahead and named the crash reports according to the benchmark naming schemes and included them in the zip, in case they're relevant.
You do not have the required permissions to view the files attached to this post.

I am celebrating the magical appearance of a new graphics card today by benching my old hardware, a Ryzen 7 3700x / GTX 960 2GB. Vulkan seems to struggle a bit on my current GPU in some cases, like Hunter's Moon 3.6, which can slow down the framerate to 40+ fps with its big blood decals on my machine.

I played through Frozen Time at 1440p on Vulkan. Frametime in the fps counter seemed to hover at 17-18ms, which is what I saw during the benchmarks too.

My first submission is for nVidia GeForce Game Ready Driver WHQL 471.68. Perhaps should be ignored because I noticed an issue.
FPS was locked at 60Hz, likely due to a Geforce driver setting. I had "Low Latency Mode" set ON, and G-Sync set to fullscreen and windowed. Both are custom settings.

My second submission is for a clean installation of WHQL 471.96. Windows Update was run for "reliability improvements," moving the system from KB5005033 to KB4023057 (August 10th to 13th updates). Now I'm seeing proper uncapped FPS counts. Frozen Time's bench has improved to a stable 16ms and around 63fps.

Interesting findings: Benching OpenGL 3.3+ without pipelining in KDIZD, I noticed the brown walls flash yellow once. After finishing my bench runs I ran both OpenGL 3.3+ full non-pipelined and pipelined again, and saw it again in the non-pipelined test, only on that map. In these runs Frozen Time was bad with 4-5fps and frame times over 250ms, but Hurt was even worse, with framerates of 3-4 and frame times over 350ms! After the Geforce 960 runs I expected Frozen Time to be the performance hog here. CPU bottleneck at fault? I hope to get some more benchmarks for systems more in line with the request, but these systems were closest to hand.
You do not have the required permissions to view the files attached to this post.

Submission 4: "benchmarks-frauds-g2s-8600m-gt" benches an Asus G2S-B2 gaming laptop manufactured November 2007. Its main features are a T7700 Core 2 Duo CPU, 3GB DDR2 RAM, and 256MB nVidia Geforce 8600M GT, a DirectX 10 / OpenGL 3.3 GPU. The GPU is a G80, notorious for hardware failures, but this one has never failed (and also had new thermal paste applied a few years ago). Brand new Windows 10 64-bit installation with all updates, and the final Geforce 342.01 driver from December 2016. Vulkan works! I ran through the bench three times with slightly different settings and drivers, and the results seem stable from what I've looked at (except Darkest Hour GLES which only clocked 121fps on one run instead of the 128 seen in the other two runs).

Interesting findings: There is a visual bug which makes everything but the HUD graphics and weapon sprite pea green in Phobos Reborn (PNG added to the archive). This affects all renderers except OpenGL ES 2.0 which looks fine. Hurt is generally worse than Frozen Time here, except for LZDoom-GL2 which is slightly faster. Also, the batch file kept closing itself some seconds after each set of benchmarks (I ended up using this to time the fan spin-down; the laptop puts out a lot of heat and I wanted to keep things even).
You do not have the required permissions to view the files attached to this post.

Thanks. That was the kind of hardware we needed results for - and the numbers are all we had hoped for. The GLES renderer is clearly the best option for it.

That green screen bug is intriguing, it also happens with a recent LZDoom with the latest optimizations merged. And i could only reproduce it with the benchmark configuration (whatever it is) not the defaults. My card is AMD GL4 compliant and i removed the -glversion 3 option.

How does one run this test?

I downloaded the file from Rachael's first post into a new folder RENDERTEST and un7zipped it.
Then I ran gzdoom.exe from the AMD64 folder which resulted in 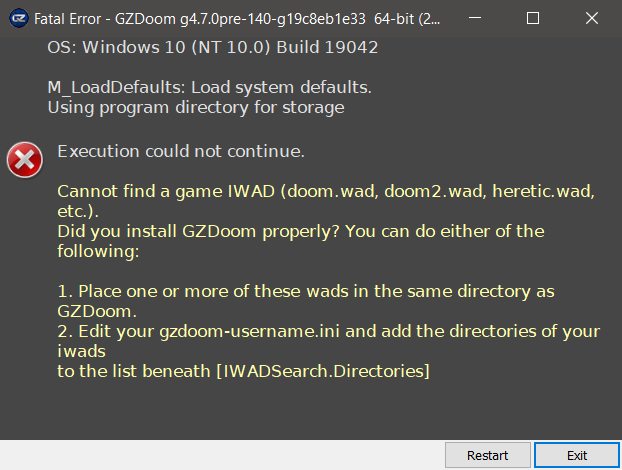 and the creation of the ini file.

I opened the ini file and specified the path to the IWADs, same as with the regular GZDoom versions,
ran gzdoom.exe again, but with the same result as before, Cannot find the game IWAD.

Is there something else I need to do to run the benchmarks, to get to

Rachael wrote:When you run the program you will be presented with several options:

All test ran without a problem.
You do not have the required permissions to view the files attached to this post.
Last edited by Kappes Buur on Mon Sep 06, 2021 3:34 pm, edited 1 time in total.

I think we have everythng we need. That one missng piece of info (real GL3 hardware) has been posted now and gives us a good idea what to recommend to users of older hardware.
What's still needed is to un-cripple the pipelined mode and properly exposing it to the user.

Especially for owners of Vulkan capable hardware I'd request not to post your results anymore. The results here have been very consistent across virtually everything we received.