This is currently in beta. That means it is feature-complete and is ready for play, but
it may still have issues. Please let me know if you find anything stupid, broken, or wonky.

This mod replaces the music, many sound effects, and 99% of textures and sprites in
Doom & Doom II. It also implements extensive lighting trickery and adds fog/smoke
effects. This is all in an effort to create the atmosphere of Doom 64 dynamically so
that it can be applied to all sorts of other map packs.

Be sure to load this pk3 file AFTER any megawads in order to prevent them from overwriting
various textures, weapons, monsters, and/or settings. 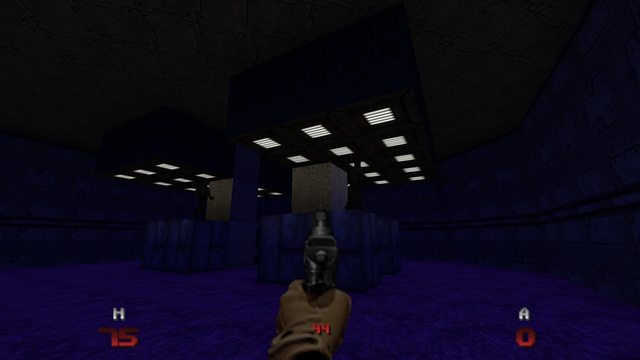 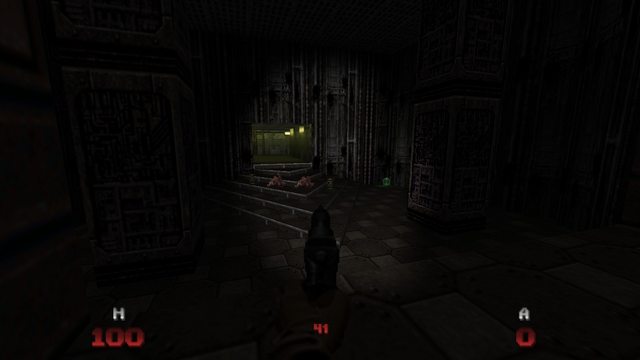 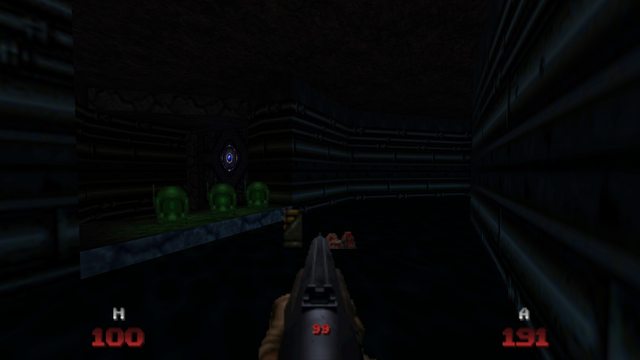 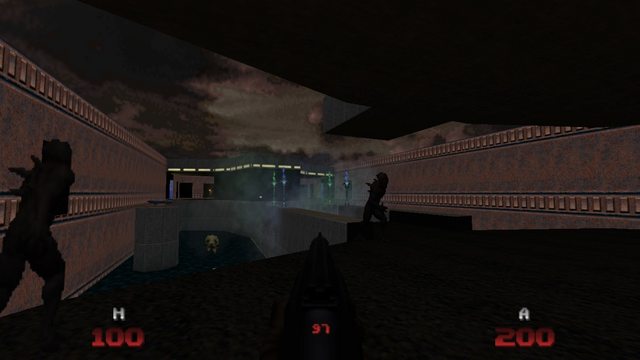 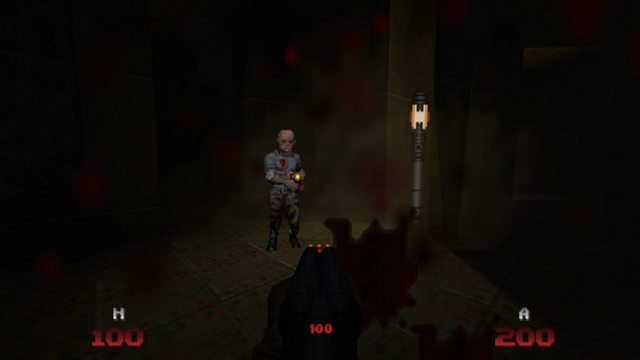 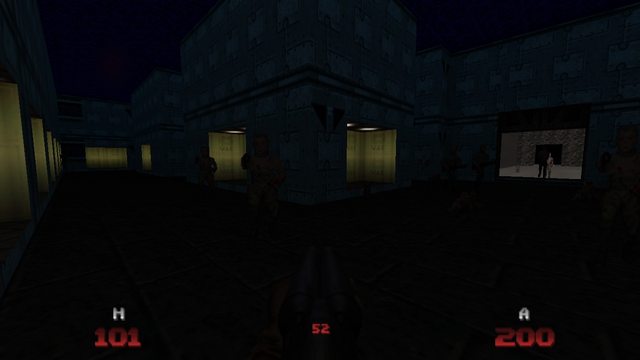 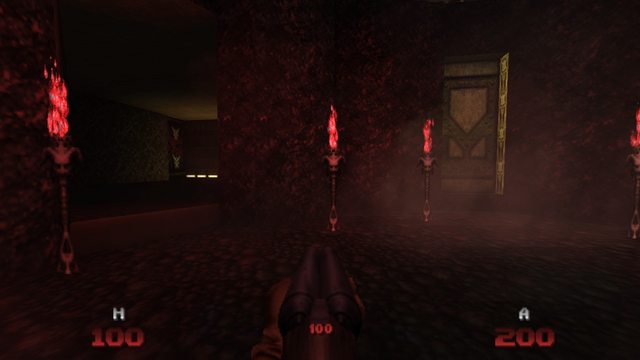 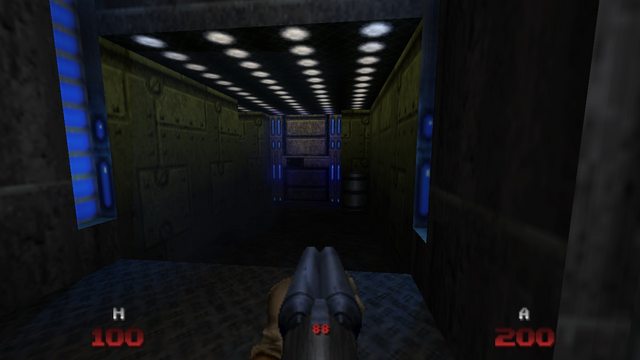 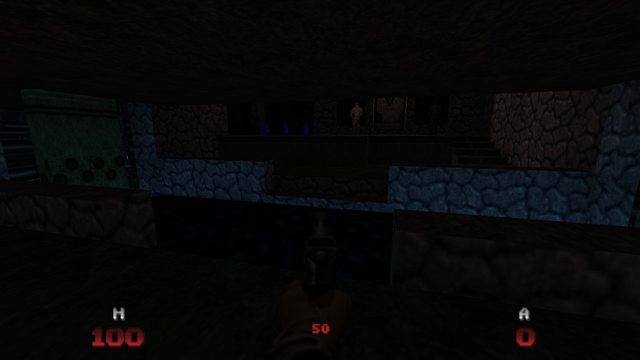 Spoiler:
- Brightness, Gamma, and Contrast should all be at the default 1.0 to prevent dark areas
from being too dark.
- Saturation being lowered to 0.75 seems to give the best effect but up to personal taste.
- Video should be set to hardware renderer; not software.
- Sector Lighting mode should be set to Standard, Bright, or Doom Legacy if you have a
darker monitor, and "Dark" or "Doom" if you have a brighter monitor. Avoid
"Build" or "Software" as they will cause certain visual effects to not work.
- Make sure dynamic lights are enabled or you'll miss out on a LOT.
- Use tone mapping at your own risk - it will remove a lot of the more subtle lower levels
of what can be seen.

Liberties taken (things that were not in the original Doom 64):

Spoiler:
- You have a helmet-mounted flashlight for low-light areas where you can't see at all without
it, but just be warned - it will alert nearby monsters to your location.
- I never enjoyed having to guess whether a zombie was a regular zombie or a shotgunner,
so there is now more visual differentiation between them in the form of the first zombie
wielding a pistol, and the shotgunners now being bald. Also the pistol zombies wear brown
while the shotgunners wear grey. This is how it was originally as well, but now it is more
pronounced.
- There are chaingunners as well. They are a bit more stocky compared to the other two
zombies, and have brown hair. Also they are carrying a chaingun, so they can't really be
mistaken for anything else.
- The SS soldiers have been turned into zombie marines. This is because there are multiple
megawads out there that that repurpose the SS soldiers into new enemies such as plasma
rifle zombies or machine gun zombies. Now you can still have those new enemies while
benefitting from them having a D64 appearance.
- A new weapon that was not in the original game is the flamethrower. This weapon's
appearance is based on the weapon that was shown in a promotional screenshot prior
to Doom 64's release, but never included with the game. It is a ton of fun to play with,
but be careful, because it is easy to accidentally kill yourself too.

Full credits included as a txt file with the mod as well as a lmp inside it.

Please proceed forth and D64ify your game, then report back to me what you think!
You do not have the required permissions to view the files attached to this post.
Last edited by BrettBotTheCryonaut on Tue Jul 20, 2021 9:58 pm, edited 7 times in total.

This is amazing work. I love how it completely changes the atmosphere of the levels, and even though I am not completely new to Doom64, this still gives the original PC levels a fresh coat of paint and makes it worth playing through them again. It makes them nice and dark and creepy, much closer to the kind of horror game that I think Doom was intended to be.

A bit disappointed that you kept the vanilla sprites for the monsters missing from Doom 64, but I guess it cannot be helped.

However, I am surprised to see the Flashlight alerting enemies when turned on. As a regular user of the darkdoomz addon, I did not know such feature had been achieved.

Thanks so much Rachael! That means a lot coming from you. Your Smooth Fluids post from a few years ago was actually a huge inspiration for me. It taught me about animated textures, what warping effects were, and also gave me the idea for a personal challenge that I like to give myself; never add new sprites or textures for what can just be created with code instead. Because of this all of the smoke/fog, torch flames, and various monster projectiles have been created by simply repurposing existing sprites instead of bloating the size of the mod with new sprites.

JohnnyTheWolf wrote:A bit disappointed that you kept the vanilla sprites for the monsters missing from Doom 64, but I guess it cannot be helped.

Yessir - there aren't really any good D64 style Revenant or Archvile sprites currently, so we're stuck with vanilla for the time being. I have a few ideas though, so we'll see what future versions may hold!

JohnnyTheWolf wrote:However, I am surprised to see the Flashlight alerting enemies when turned on. As a regular user of the darkdoomz addon, I did not know such feature had been achieved.

Ah! I actually removed the flashlight module from DarkDoomZ and replaced it with the one from Brutal Doom Black Edition, which is a cleverly edited version of the DarkDoomZ flashlight that basically makes enemies "feel" the light from the flashlight if it touches them, which then alerts them. That was one half of the solution. The other half though was just a simple matter of adding one additional line to the section of the code for when you turn on the flashlight...
Before:
A_PlaySound("torch/click", CHAN_AUTO);
After:
A_PlaySound("torch/click", CHAN_AUTO);
NoiseAlert(0, 0);

Tried this out and it works great, except the monsters' detection of the flashlight seems a bit odd, seeming as if they can detect it through walls at times.

finally, a Doom 64 replacer for Doom that covers almost all things!
one criticism I feel I should give is that I feel you should recolor the chaingunner, the sprite is clearly vanilla Doom paletted and I feel you could play with the colors and tweak them to give it a more "Doom 64 truecolor" look, as well as proper red armor too

chexglyph wrote:Tried this out and it works great, except the monsters' detection of the flashlight seems a bit odd, seeming as if they can detect it through walls at times.

They can hear the "click" your light makes when you turn it on (they have REALLY good hearing).

One thing I've enjoyed doing is hiding around a corner with my shotgun and then clicking my flashlight on so that it attracts them all to come marching to their death. It's cheap I know...... but still fun.

Can't argue with that! It has been added to the "To-Do" list for the next release.

Not bad overall, but I have to say it is way too dark. I had to crank up my gamma to 1.5 to make out the surroundings. Normally I play with a gamma of 1...

That seems intentional - because there is an option in the controls menu to bind a flashlight, I think that was the intended way to play this.

Graf Zahl wrote:Not bad overall, but I have to say it is way too dark. I had to crank up my gamma to 1.5 to make out the surroundings. Normally I play with a gamma of 1...

Hmmm question: If you watch that youtube video, is that video just as dark? Because if so, then it sounds like your monitor is significantly darker than mine. I have my backlight at 80% brightness, and I've played through all of Doom 1 and 2 with, I'd say around 75% to 85% of the time being able to make out my surroundings just fine.

Rachael wrote:That seems intentional - because there is an option in the controls menu to bind a flashlight, I think that was the intended way to play this.

Only a little bit. Is it supposed to be darker than vanilla Doom? Absolutely. But the flashlight is mainly meant as a "just in case" sort of item as opposed to something to be turned on more often than not. It sounds like I need to figure out a way to account for people having monitors which are darker than mine. If I simply brighten things up, then they might be perfect for other people but they'll be too bright for me, and if I just lower my brightness level that will lower all lighting equally which will mean decreased contrast because the brights won't be as bright any more.

Maybe I can create two different lighting presets; one for brighter monitors like mine and one for darker monitors, and put an option in the menu to switch back an forth. Definitely worth looking into it seems.

This is excellent work, but I do indeed agree it's way too dark. It's almost pitch black for me unfortunately, certainly needs adjustments.
(edit: I just remember that it's probably even darker for me because I already have darker settings on GZDoom set up currently)

I am definitely interested in seeing progress on this made though. I like the idea of a D64 style mod that doesn't change game-play. I don't know if GZDoom will ever support the offical PC version of Doom 64, but this should be nice for now.
Good work, keep it up!

Made a new video showing my "correction" to the appearance of the cacos and pain elementals (this will be part of an optional version of the D64ifier so if you don't like this change you can always use the more purist-friendly version). Also a new look (the D3 look) for the archviles that I'm still tinkering with.

the Baron seems to have some weird orange pixels all over his body, is that intentional?
EDIT: also I think you should use the original version of the Pistol Zombieman instead: viewtopic.php?f=37&t=54369&hilit=a+bunch+of+doom+64+sprites
since the Brutal Doom 64 one has this ugly "Brutal" muzzleflash on the firing frames that DO fit BD but NOT D64's style imho