Born from a series of HUD extensions that I created for personal use, Simple HUD Add-ons has morphed into a customizable way to display in-game information independently of your HUD. Many bug fixes and customization options have been implemented thanks to feedback from the community, so feel free to post if you have a suggestion or issue. Here's a video showing off some of the options:

Shows a list containing the ammo pools for all of your weapons. I made this to use with gameplay mods that don't natively show this information in their HUDs. You can toggle text abbreviation, alignment, colorization, opacity, and position the list where you want. It works with Doom, Heretic, Hexen, Strife, and various mods.

April 13, 2020 (v1.25)
- Added an option to display ammo capacity percentages.
- Fixed an issue where respawning under certain conditions would disable the add-on.

November 21, 2018 (v1.13)
- Changed the default behavior when an unrecognized game/mod is detected to show the standard Doom ammo types.

April 27, 2018 (v1.04)
- Font converted to the FON2 format for potentially faster loading.
- Increased the update rate of the ammo counters.

A small health bar and percentage will appear below the crosshair when you aim at a monster. You can toggle health percentages (with total health instead), show object (non-enemy) health, display monster names, and adjust its fade time. You can also change the opacity and the position (to the pixel) if you so desire. This was designed for use with a 1920x1080 resolution, and using it at other resolutions may cause display issues.

April 13, 2020 (v1.19)
- Fixed an issue where respawning under certain conditions would disable the add-on.

January 22, 2019 (v1.10)
- Now uses ZScript to obtain actor information.
- Fixed an issue that prevented actors with the GHOST flag from being detected.
- Another sizing option has been added.

Call of Duty-style hit and kill markers will display as enemies take damage from the player. Additionally, there are a variety of hit sounds available from numerous popular shooters. All visuals can be toggled off, so it's also possible to set this up as an audio-only add-on. Other options include style tweaks, color switching, volume controls, fade out timing, and individual hit/kill sound effects.

November 18, 2020 (v1.17)
- Modified the default behavior of kill markers to not overlap hit markers.
- The old behavior can be restored by enabling the kill marker priority option.
- Animated styles no longer have different hit and kill animations.
- Added a new animated style with a default and small size variant.

April 13, 2020 (v1.16)
- Fixed an issue where respawning under certain conditions would disable the add-on.

January 20, 2020 (v1.15)
- Hit/kill markers on allies are no longer triggered when friendly fire is enabled.
- Monsters are now ignored in deathmatch modes.

April 13, 2019 (v1.02)
- Fixed an improper method of hit detection that could cause unintended behavior or crashes.

Displays kills, items, secrets, time, power-up durations, hazards, and remaining oxygen. Many of these items can be abbreviated or toggled, so if you're already using a HUD that displays much of this but doesn't show power-up timers, you can leave only those on to not waste space with redundant information. Text abbreviation, alignment, opacity, and positioning options are also available. 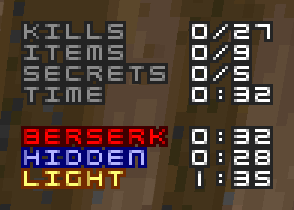 April 13, 2020 (v1.25)
- Fixed a spacing bug that could trigger when percentages are enabled.
- Fixed an issue where respawning under certain conditions would disable the add-on.

May 27, 2019 (v1.20)
- Added the option to toggle visibility on the automap.
- Fixed a bug where percentages could cause text misalignment.

PlayerInfo shows your health, armor, keys, and held weapon ammunition. As with the other add-ons, you can customize the way this information is displayed to suit your preferences. The key display is a separate module that can be used to visualize any collected key in a game or mod. Keys can be placed anywhere on the screen with various presets, placements, and size options.

Spoiler: Changelog
July 6, 2021 (v1.03)
- Fixed a bug that caused the add-on to stop working when highlighting is active.
- Fixed an issue with incorrect highlight colors under certain conditions.

All-in-one
You can download the latest versions of all the add-ons in a single file here. Requires GZDoom 3.6 or newer.

These are both absolutely amazing! Keep up the great work!

Any chance you can add AmmoInfo support for D4T: Death Foretold? DBThanatos and the others have been so busy with Quake Champions: Doom Edition that they haven't had time to properly add reserve ammo counters, despite my suggestions. The Ammo Types in question are as follows: Shells (Orange), Bullets (Yellow), Rockets (Red), Cells (Cyan), and Slugs (White). Chainsaw Fuel (Dark Orange/Brown) and BFG Cells (Green) are already shown on D4T's HUD, so you need not worry about those two...

SoulCircle wrote:These are both absolutely amazing! Keep up the great work!

I will definaly get the HP Readout. the one i use target non-enemys and can get kinda bad in some maps.

Edit:Yup its definaly better then the older one. but it is posible so scale the hp bar without haveing to change resolution? its fine right now but others way need it.

kadu522 wrote:it is posible so scale the hp bar without haveing to change resolution? its fine right now but others way need it.

It renders as small as it can given the resolution. If someone wants it bigger than that, I just added an option to increase the size a bit. I guess this could be useful for people who play Doom in 4K, if they actually exist.

I also made some other changes to all of the add-ons, which are noted in the changelogs in the first post.

Thanks. I appreciate the feedback.

I made some small changes to the mods (for minor aesthetic issues), and this will probably be the last of them unless something breaks, someone suggests something, or there are mod compatibility requests.

I've been experiencing quite a performance hit whenever I load all three of these minimods together on Delta Touch, and I think I know as to why: The minimods, as they are, have to pull a bunch of images together from the font folder to render each of their respective modules, which means slower read times as they render each individual character/number from a set of PNG files.

May I suggest compiling a .FON2 lump, with the entirety of your font inside it, to reduce the workload of the rendering engine?

That way, all characters, symbols, and numbera can all be loaded from a single file, as opposed to a massive amount of small PNG images.

ADDENDUM: I found a temporary solution to this issue; by jury-rigging all three minimods into one PK3, and pointing all of them to the CrosshairInfo font, my framerate's back in tip-top shape. I'm uploading the combined package in this post, as a proof-of-concept...

Credit goes to Tekish himself for all three minimods.
You do not have the required permissions to view the files attached to this post.

I'm surprised that's causing a performance issue, as it doesn't change a thing in GZDoom. I converted all of the fonts to FON2 lumps, see if that helps.

Marginal performance gains, but not quite as much as what I had posted. Perhaps you could try combining all three minimods into a single package like I did, and make it a separate download for those who want an all-in-one experience...

Any chance of support for DoomZone v1.8.1 and Doom Incarnate in the next update?

In the case of DoomZone, Frag and Napalm Grenades are always shown, though the Special Ability Cooldown doesn't have a "timer" outside of a gauge. That, and there's quite a few player classes.

Regarding performance: HudMessage (which these add-ons use) is expensive. It's something I noticed early on, and if you use it to say, render the letter A over the entire screen and do nothing else, it will eat hundreds of frames on a modern gaming machine. The refresh rate, font used, opacity settings, fade timings, other code in general - none of these things have a substantial impact on its performance. The only things that do are the number of characters and to a much lesser extent, the size of them on screen (larger is more taxing).

It doesn't help that to get around HudMessage's inconsistent positioning options, I use invisible characters (which still hurts performance) to align and place various elements in AmmoInfo and LevelInfo. Because of this, I have updated AmmoInfo and LevelInfo with tweaks to use the bare minimum of invisible characters for proper alignment, which could potentially increase performance on older or weaker machines. This does come with a caveat: this only works if alignment is set to the right side of the screen. It takes far fewer hidden characters to align text on the right side than the left.

If you're still experiencing performance problems, remember that less is better. Use abbreviations, small custom position increments (or none at all), and align text to the right side of the screen. If none of these help, you're screwed until HudMessage is replaced with something better, I guess.

ShockwaveS08 wrote:Any chance of support for DoomZone v1.8.1 and Doom Incarnate in the next update?

I'm heading out for the day so I'll look into these tomorrow. Though, if I recall, DoomZone has 100 weapons or something, which makes the manual entry of ammo types time consuming enough that I probably won't bother with it unless I get a hankering for some real tedium.

Also, I added a package with all of the add-ons included, for those who are into that sort of thing.

Any chance of a standalone version of the font that is used in your addons, for those of us who want to use it for any projects, private or public?

ShockwaveS08 wrote:Any chance of a standalone version of the font that is used in your addons, for those of us who want to use it for any projects, private or public?

I'm not sure I understand the request. The font is a slightly modified version of MemenTwo, which you can download in this thread. If you're referring to my variant of it, you can just take the font lump and move it into other projects?