I've been thinking about that lately. I was hoping to find a better way than just making pickups spin, but you're probably right. And yeah, I know something I can do for candelabras and such. I'll have that stuff in the next update.

Awesome! You've got me intrigued

I don't know if this is somehow a bug in this mod or in GZDoom, but it happens in both 3.2.5 and the latest devbuild. In software mode, truecolor or not, the red crosses appear through the rest of the voxel. This happens with both health kits, but nothing else from what I've seen so far. 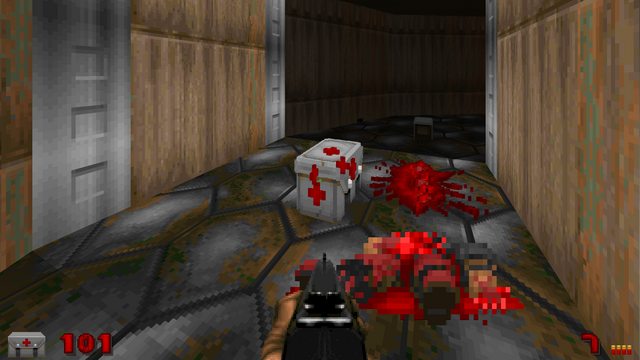 There's a set of software-mode voxels, are you using those?

Oh, I forgot! Unzipped the normal version and never looked back. Still, any idea why it does that?

I think the crosses are a different voxel model. It's an issue with the Software Renderer's depth buffer IIRC

Yeah, that's it. I made the crosses separate so that I could attach a dontlightself red light to the gray box part, so that the crosses glow while the box doesn't. Software renderer doesn't much care for my shenanigans.

I think I may not have updated the software voxels in a while, so I'll double check that while I'm at it.

Thanks, but I'm probably going to end up making them all myself regardless, just for the fun of it, and I don't want to turn it into a competition. I make them because I just like making voxels. I guess you could call it art therapy, too.

I'm sorry...it's definitely nothing personal against you. I'd be down for collaborating on some other project, but I'd like to keep this one mine.

I just updated the Doom version with the wall detection code Ryuhi worked out for me, which I originally used for Heretic's statues.

I added the torched tree, made the tall torches closer to the original sprites (the skulls were way too big), tweaked the barrel animation, and included some vanilla-flavored decals that no one asked for.

I got distracted by making new models for other mods, so I released this mostly just for the wall detection stuff. It doesn't work miracles, but it does its job in most situations. It messes up when you apply it to items that may be bunched together like medikits and stimpacks, but candelabras are typically far enough apart, and berserk packs and computer maps are pretty much always alone. Most of the rest of the stuff I just rotated 90 degrees, because that actually seems to work well with vanilla maps (but it's obviously totally broken for i.e. items in KDIZD). I wanted to add options for these things, but...do I really have to make replacement actors for everything, or am I missing something?

no i have to make all the voxel forever
I want to make monsters, but I'm probably not being realistic. Seriously, I would love to see anything you make, monsters or not. I'm just weird sometimes.

Awesome! The new tree looks amazing! I noticed you added the item rotations too! Any reason you decided not to make the armor rotate? Also, I wonder if there is anything you can do about the sideways Techno Pillars in E1M1? Other than that, this mod is absolutely perfect so far!

I'm just not a big fan of having things spin, so I avoid it if I can.

Most weapons actually float a few pixels above their offsets, and they all just kind of stand up by themselves, so they're already futuremagicky/nintendologicky and it's easier to justify spinning. I would like to make dropped weapons simply face the direction they pop out, but I don't know how to do that.

By contrast, armor just sits there on the floor like medikits and ammo, so I don't really feel like they should spin. I just plain got lazy about making actors for them so they could use the wall detection code, but now I'm not sure how effective that would be. They're otherwise good candidates for it since you never see two armors next to each other and they lose their readability at odd angles. However, they're often a little too far from walls and in the center between multiple walls, and that can break the current detection method. I don't really know what to do with them right now, so I totally halfassed it.

The pillars are often far away from walls or in corners, so that code will be useless a lot of the time. Right now, I have no idea how to get better than random chance at making them face the right way. Trees can spawn at random angles, but I can't get away with making the pillars like that.

I'm a fiend for the voxels, but I'm not wrapping my head around Decorate that well.

I like how voxels fill the gap between full of pixel art, but flat sprites and soulless (in my opinion) 3D models.

It seems there is something wrong with decals background: