So I played Valiant again and I forgot how amazing the Super Chaingun was. So much so I'd love to see it and the Super Pistol as standalone weapons.

This mod would change either potions and/or barrels to have a roguelike dynamic to them, mirroring the random potion system of most old school roguelikes.

In example, if you come into a room with a set of three barrels, one barrel may be normal, while the other two may be a strength and defense barrel that boost your melee strength, and add to your defense respectively.

The mechanics for interacting with the barrels are as such:

If you damage and detonate the barrels, they unleash an aoe with their respective effect, so an imp nearby would then have enhanced melee damage AND get armor, as would of course the player.

A secondary way to interact is to get close and hit use, and the player can pick up the barrel, letting the player choose to A: throw the barrel which will promptly detonate it as normal, or the player can DRINK half the barrel, which takes few naked, vulnerable seconds, much more if they drink the whole barrel.

If the player drinks half the barrel, the effect is understandably half, in example a defense barrel will grant a player 80-100 points of defense when you drink half, or a strength barrel gives the player a good minute and a half of berzerk strength enhancement.

If however the player drinks a barrel whole in short order, the effect is not only powerful, but the player may get a debuff that lasts for a short time.
A defense barrel drunk whole will give 210 points of defense, but the player is slightly slowed until their armor is whittled down to 180, or they move around for 30 seconds.

A strength barrel will grant the player a massive melee boost, but they cannot hold any weapon but the fist or chainsaw, and they may end up slashing/punching uncontrollably at random intervals.

Another example could be an adrenal boost, which when drunk by half, increases the run speed of the player a decent bit (About half), and increases their weapon speed slightly (0.5 increase) , when drunk in full, the player runs fantastically fast, and their weapon speed is enhanced 80 percent, but they have a hard time controlling their movement as they slightly slip when slowing from maximum speed, and they can drop weapons accidentally from all the jittering.

Drinking too much from barrels (Or potions) gives a dangerous "sick" debuff in which the player will periodically hurl caustic liquid that can damage foes, and harm and buff or debuff monsters randomly depending on the effects drunken. It harms the player slightly over time as well, and in small chunks when they hurl.

Then comes the dipping

, the player can "dip" their weapons into a barrel/douse it with a potion, to give it an effect for a small period of time. This even works with the standard barrel, which gives weapons a slight explosive effect, not too much, just a little, and for rockets, it enhances them a bit, giving their aoe about 0.8 wider radius, and a 1.0 damage enhancement.

If such a mod had both barrels and potions changed up, I think a fun mechanic would be to let the player pour potions into a barrel and promptly throw it to cause a large explosion of wild effects dependent on what was poured in. The player does not have long to throw it though as the blend is unstable!

The player can find empty potion vials to fill up by barrels, with a potion filled up taking half of what is in a barrel.

Effects I have in mind include the following:

Buoyancy: gives the player a floating effect when coming down from a jump, also when jumping, can be dangerous if the player is pushed around while under the effect!

Cryo, freezes entities caught in explosion for a short time, if drunk down, slows the player but gives a little "ice armor" effect, giving resistance to fire effects, slowing the player down slightly, and giving them a small chunk of armor points, without replacing the armor type they have on (If none is worn currently, they get a specialized ice armor type that is slightly stronger then bare armor shard defense.)

Trippy: monsters effected will move and attack randomly, and periodically "die" for a few moments before getting back up, and periodically "hurl" creating slippery entities that cause slippery movement for all players/monsters moving on them. If the player is effected, colors will get weird, and there will be a slight distortion effect on their vision, and periodically "fake" enemies will appear in front of them.

Brain Juice: Monsters enhanced by this will be more tactically intelligent, equating to them attacking a little faster and gaining a "dodge" move, as well as the inclination to rip apart the player emotionally by slinging dire insults their way. Also they can pick up barrels and throw them. A player under the effect will temporarily get the map revealed to them, and they can utilize health and armor items better, getting twice the boost from them, and lastly they can get a new option with barrels and potions, letting them mix up an arcane mix (And mixing it with their charged BFG) to create powerful summons!

I know some mods kind of do this, but I think a dedicated mod designed to work with other mods would be a fun way to spice things up!

Been playing Quake Champions: Doom Edition and am hooked on the idea of music randomizers. I know there's a few out there, but there aren't any with a specific feature I'm after (or if there are, please tell me because I'm desperate to make some sweet music mods).

Would like to include "pools" of music to pull randomly from, and specify those pools on a per-map basis. This way you can exclude the randomizer pulling any random track for a specific map that it might not be fitting (eg, you want cool boss music for your map30) and instead pull from a separate pool (only contains a random selection of cool boss music). Would be fantastic for episodic stuff.

At the moment playing around with "SynthDoomMK2" for this, which is a good standalone offshoot of DemonSteele's "Now That's What I Call A Midi Randomizer". But when it comes to ACS I'm dumb as a sack of rocks.

I wouldn't mind seeing a version of cdusr's Infinite Backpack Doubler where you can set the max amount of times it doubles up.

Welp I had idea about Samurai Jack TC...
I start working on it but I'll need help with sprite work, animations and scripts....
Any additional help with TC is appreciated

I always wanted to be able to remaster MAP11, MAP02 and MAP07, but dont have the skill to do so!
I dont know what tools i should use aswell.

I know there have been plenty of Metal Slug inspired mods in the past (my Lizard Squad mod included lol), but it would be nice to have a legit Metal Slug mod complete with tons of rideable vehicles and Metal Slug 6 style weapon swapping.

i just thought of if there was a new game like half life, like half life 3. there would be more aliens and robots, there would be sky cities and space cities. maybe you could hover above the ground with advanced shoes and a advanced suit. you could jump high like in metroid prime. or doom 3, just pretend only doom 1 & 2 exist lol. not a fan of the new doom games.

A long time ago, mentioned an idea I had for a mod/TC inspired by stuff like 'Blade of Agony', as well as BioShock, basically a Wolfenstein/'Weird War'-esque story set in the Pacific Campaign of WW2... well not much has come from it sadly.

Except this big ol' bastard I made. 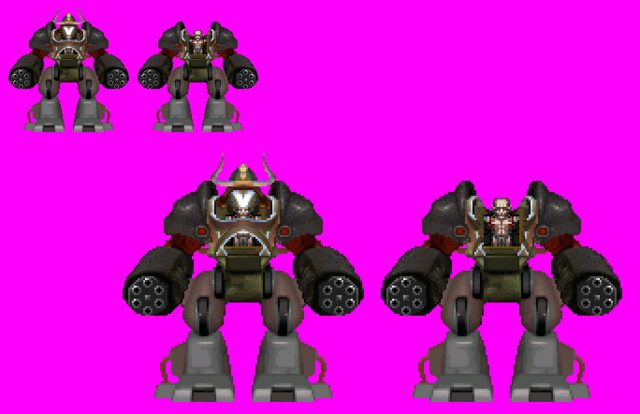 Basically like a 'Dieselpunk' 'Shogun' mech suit. Maybe with a bit of 'WH40k' influence in that the person is pretty much stuck inside this suit.

Mixture of Duke Nukem 3D, Shadow Warrior, Strife, and probably some Wolfenstein sprites here and there.

Sadly, this is all I have of this idea.

i like the realism idea.. more realistic actions and operations with weapons!

- projectiles instead of instant damage
- health decrements boost abilities down, not up (lower speed, slower reload, bleeding etc)
- run speed have to be adjusted (lowered)
- 2 firing modes: reflexive and aimed
- firing while running is not possible obviously (monsters dont do that, right)
- projectiles (bullets) ricochet/bounce
- projectiles (bullets) are affected by gravity and air resistance
- more "basic" weapons like: knife, bow, pistol/revolver
- weight affects speed, max carry weight
- postal kind of pissing, some food/water supplies
- ammunition is super-rare, obviously, same as guns around the map, should be filled with something else..
- etc etc

now modding brutal doom, maybe to convert it into brutal action doom. BADoom. treating actions, states and logic as the base - sprites may be replaced later, also have an idea to capture real objects and then "spritify" them with a little bit of re-draw.. drawing's hard