It is doable, yes. Although melee weapons tends to go outside the screen, so there's a chance that some of the lance turn out missing. But i'll try to rip it the better way possible.

Big deal. Many of my rips go goutside the screen during reload and such. That's not a problem at all, and (hopefully) the Thermic Lance has no hands on it, as it is a mighty long weapon, so less work for meeee

Oh ye...and do NOT palette it! I shall use truecolor PNGs, I had enough paletting shit at Tristania 3D and I damned the whole thing to hell.

Don't worry about palleting, that's not something i usually do in my rips. I'll just ask you to wait a little, since there are two weapons that i am working now, including a previous request by Captain J. Is there any other weapon that you want besides the lance?

I'm also in the middle of animating, so it's not urgent at all, just take your time. The Thermic Lance is the only weapon I desire, as my TC will also have a Thermic Lance in it, and it's a pretty prominent weapon to have, in many occassions, it'll be compulsory to utilize it for completing a level.

Excellent! If this is any important, 1024×768 would be the adequate size for the rip (it's not a problem if it is bigger). I would also require to have its sound effects: the "draw", the "idle" and the "fire", if you can locate them. Not sure about a Thermic Lance having an "idle" sound at all, but if it has, it would be great.

Reactor wrote:Excellent! If this is any important, 1024×768 would be the adequate size for the rip (it's not a problem if it is bigger)

Do you want the lance to be resized, or would you prefer it on this resolution? I'm having a little trouble with the Courrier hands, if i remove them the weapon parts are missing (i'm doing the old fashioned screenshot rip way), so i need to manually reconstruct the missing parts using my Gimp-Fu. This will make things a little slower than what i thought (not to mention some other graphics i'm doing in parallel)... i hope you're not in a hurry

But don't worry, it will be done.

EDIT - Oh, and the Thermic Lance fire sound can be found on the wikia page

You can leave the hands as they are

I'll remove them meself and give the appropiate player's hands to it, so no need to worry.
As for resizing, there is no need for such thing, if the resolution you have recorded the Thermic Lance is at least 1204×768. If it's bigger, I'll resize the frames manually.

For screen capture, I'd recommend recording stuff with Fraps, then export the recorded footage into individual frames using Blaze Media Pro. This is how I did my resource weapons, and I must say, it works miracles! And no, it's really not urgent at all

new sprites added to the rooster

It's been a while since the last time i have posted here, so first o took my time to re-organize the sprites. Some of the sprite sheets were bigger then 800 pixels, so i had to change the images and add a few links to the full sheets. Also, i'm updating the thread with some stuff i found on both my pc and imgur account that i have forgotten to add here. For now, i'll add two revolvers (one is full sheet, the other one is a single frame) 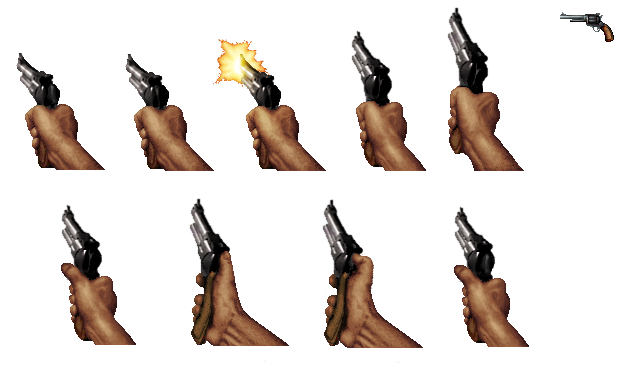 Credits to Turbo and Mike12 (and Monolith Productions, of course)

Credits to Clay (aka SomeOtherDoomGuy) 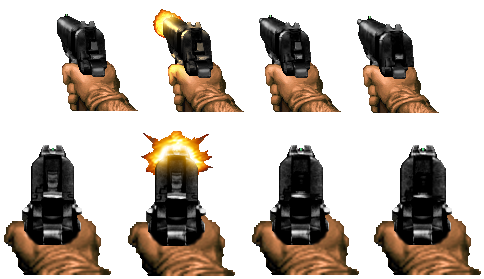 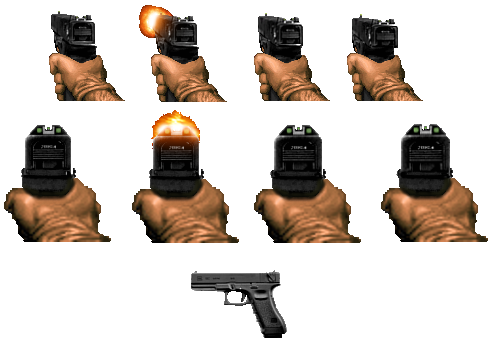 I really like that but the resizing has created a fuzziness to it and translucent pixels around it too.

White and magenta used to show the location of the translucent pixels in one of the frames:

Oh, do you plan using that one for something? I can come up with a clean version for you Enjay.

But the truth is, i stopped caring about that resize fuzz for a while now, when i realized that's really unnoticeable in GZDoom ( at least in GL mode). I can still fix that for you though.

No plan as such, but I liked it and thought I'd keep it in my "just in case" folder. So, no rush and no immediate need but it'd be nice to have it cleaned up as a possibility if you have the time and inclination to do so.