This issue happens with a very specific setup which depends on user settings as well as the game state, so I'm attaching my INI here to help reproduce the bug. Note that there may be other cases where this issue can manifest itself, but it all seems to happen when the level is loading. 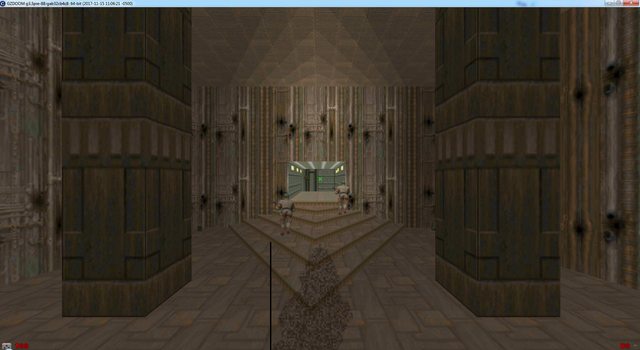 Git bisect shows that the issue started happening in this commit.

System information: NVIDIA GTX 660, Windows 7 64-bit.
You do not have the required permissions to view the files attached to this post.

It also happens only with the 'Noise' fuzz style. Looks like a bug in that shader function.

Sorry for a two-year bump, just wanted to update this report with some new information. 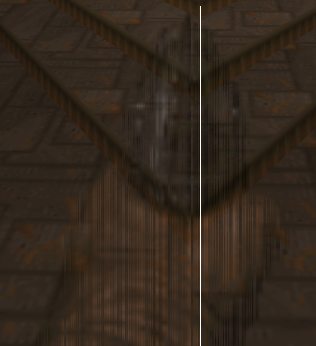 I thought it was a driver bug and i didn't report that. Seems it's much worse, remember that the default gl_fuzztype is 0. LZDoom is also affected.
If i set gl_fuzztype to 4 for instance, summon a spectre and give myself the invisibility powerup i get glitches galore (lines and dots) as it walks around below me.
I get random glitches all the time while playing whenever i find a spectre.

Seems this new report is a driver bug after all (or at least mine if it's not the same, i think i updated the AMD drivers recently), with this change the artifacts remain:

@Player701: What's your graphics card? Do you see the artifacs i've mentioned?

Hmm. Now that I've tested it on my laptop, the results are somewhat different, but only slightly. I have an RTX 2080 Ti on desktop and GTX 1050 Ti on laptop. I have updated the drivers to the latest version (as of now, that is 457.30). Tested with both Vulkan and OpenGL backends, there seem to be no difference between them (on the same machine, anyway).

Here's what I've found out:

Houston, we've got a problem. I've checked GZDoom 3.3.2 with a renamed LZDoom ini and it's not affected. The artifacts are very noticeable @1366x768. I backported some shader related stuff i think.
Edit: it's something recent, 4.1.3 was affected and 4.0.0 was not.
Edit2: the problem is not in the shaders themselves, it's something related to the timer. BTW the dots appear near the monsters.
Last edited by drfrag on Mon Nov 23, 2020 12:51 pm, edited 1 time in total.

I don't know where the problem is, gzdoom-x64-g4.1pre-92-g5b6bae409 does not show the issue. It comes from the now deleted vulkan2 branch, it had several hundred commits and was active for several months. I could try to investigate it in the legacy branch as i saved the devbuilds in my hard drive, it's something i cherry-picked.
Edit: nope, they are not old enough. 3.8.1_legacy is not affected, 3.8.2_legacy is.

I've found it and without having to compile, it's fixed reverting this commit:
https://github.com/coelckers/gzdoom/com ... 96921a24e8
BTW now Travis-CI is paid, so i won't be pushing much for now.

Again it is not that simple as a revert will also break the intent of that commit.

Of course, but is it actually that important? Before that commit was not in and HDR worked, i obviously don't have a HDR monitor and the issue is serious enough to revert the commit unless a better solution is provided. Someone with a HDR monitor could try to fix that enhancement.
I mean reverting the commit is only a possibility, the important part is that now we know where the problem is.

Yes, but the fact that you suggest reverting the commit as your first go-to is really just not something you should do. It should always be a last resort.

Yeah, i should have said they are gone reverting that commit bad choice of words. But then i thought in LZDoom gl_fuzztype is 6 by default and not many of its users have a HDR monitor. Also thought that it was only an enhancement for HDR not based on any recent previous commits else i wouldn't have picked it, HDR had been supported for a long time without that. I'm still waiting for a better solution anyway but for now the bug is gone in LZDoom.