This issue falls into the category of "all renderers except for Doom Software" so I am not quite sure where to put it outside of here. So, this one is kind of peculiar. I have a 256x128 TEXTURES entry. The leftmost corner of the texture has a 128x128 patch, and the rest is transparent like so: 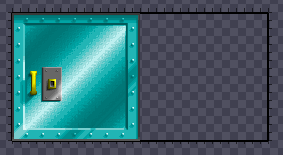 This TEXTURES entry is scaled by 2 (making it 2x smaller in the game world) and is being used on the midtexture of a 64-unit-long linedef. The front side of the linedef is completely ordinary, but I gave the backside's midtexture a scale of -1 so that it would appear flipped on the other side. This line is manipulated via ACS to scroll rightwards upon activation and then after a delay, stops the scrolling and adjusts the texture x offset to the x offset it had when it stopped scrolling.

Curiously, the effect the scale has on the back side's scroll direction is desireable. It scrolls left on the back side instead, most likely due to its back midtexture having a scale of -1. However, this behavior is only present in the Doom Software renderer. The SoftPoly renderer scrolls at twice the speed (and the door jamb textures are misaligned among other things) and the OpenGL renderer exhibits some oddities too. I'll let these videos speak for themselves:

For personal reasons, I'd rather not publicly release the archive as it is but I can easily PM someone with the .pk3 so that they may test it themselves.
Last edited by DenisBelmondo on Tue Jul 31, 2018 1:41 pm, edited 1 time in total.

So, where's the testable map? A video cannot be debugged.

Apologies, just edited my first post saying that I can PM you with the archive at the same time as you replied. Sent.

I'm not really sure which one is correct. I remember the change in the hardware renderer being deliberate, it may actually be that the software renderer was changed later as it saw quite a bit of refactorings. But I do not recall the details about this issue and will have to find the needed info first.

For sure, thanks for the info.