Wait, in the episode 1 there was supposed to be a vendor that upgrades your weapons. Where is he ? I'm at the end map, and havent seen anything of that nature.

Spoiler: Kinda spoilers?
He's inside of a big open tent, near the Gun Seller(a friendly shotgun mook) who sells you the Rifle, at the right side of the two trains. His name is Rigs. You will have to ask for upgrade as a reward and follow the dialogue right. Then you can get yourself a brand new MAC-10!

Be sure to spend all your scraps for supply and weapon upgrade because after leaving the city, you can't go back.

The numbers are for using in a map editor; in the console you only need "summon townmilitia".

*sigh* Look. I said i was at the last map. So clearly i did talk to Rigs, otherwise you cant get further. But he says he cant give you upgrades, and the only choice is armor or ammo. Do i have to insist on asking for upgrades repeatedly when he clearly says there are no upgrades to be had ?

Right, might've needed more details with the question but sorry about that. So you did meet him and talked to him, but can't upgrade your weapons? Then i think i forgot to mention this, but you must have MAC-10 at this point because he can't upgrade any weapon besides that. And yeah, you must pursue him upgrading your weapon during the convo and never click on the dismissive dialogues.

I figured I might as well give a bit of feedback here! Ashes 2063 is I think my favorite post-apocalypse game ever, and I'm pretty damn excited for the sequel. I'm aware the demo is now many months old and was always a massive WIP, but I thought I'd give my two cents on some things I don't like.

First, the enemy count. I went headlong into survival hard and, simply put, the amount of enemies isn't fun. Ashes' gameplay, especially on that difficulty, isn't really great for tackling hordes of raiders at once in open arenas. It kinda turned into a stop n' pop kinda game eventually, and some rooms felt like trial and error to slowly figure out where each enemy is so they don't kill you with your back turned. This isn't fun. Maybe on a less punishing difficulty, it's more manageable, but it still wouldn't be fun. I welcome the bigger arenas, but the placement and amount of enemies turns them into a game of waiting at a door to shoot.

Second, the light sectors? Lighting in general? I'm not sure what to call this, but the game is kinda just too dark? I'm using the exact same settings from 2063 and Michonne Circle looks way, way darker and is less easy to navigate as a result. In general, some interiors are just not well lit enough. I'm thankful for the lantern now being a hotkey but I feel like I should use that for the REALLY dark areas, and not just generally walking around a building, or the town hub?

I'm loving the level design and advancement in the art style, and the interconnected nature of the game is a fun departure and evolution from the first game I'm excited to see more of. I just hope these two things get ironed out! Thank you, and good luck!

Edit: I've played a bit more on a lower difficulty now and I guess I should be more specific: it's not that there are too many enemies, it's that there are too many raiders. Fighting hitscan (or hitscan-ish? I notice tracers now but I can't tell if that's not hitscan or not) enemies in big open sight lines isn't fun, or it could be fun if there were a more varied mix of hitscan and projectile enemies. I'm not sure if this is a problem with enemy encounter design or level design, but I can point out a couple areas in the first map where this feels especially bad: the box room where there are seven raiders hiding in random spots in the room was really bad. This is what I was talking about with trial and error encounters. Same with the switch to open the curtains back up to the main shopping area. Having a (silent!) trigger to have a bunch of raiders and a shotgunner come out behind me is unfair kaizo trap bullshit. On top of that, the trigger is too small and narrow and can easily be avoided. This is cheap, and is stuff that wasn't in the original game. Lowering the difficulty doesn't help either, I still fall into the stop n' pop and paranoia that's not fun.

Spoiler:
Hmm, I understand what you are saying. In essence, Rigs doesn't have the parts to do major work on your weapons, he just happens to have an old suppressor that just happened to fit on that model of submachine gun. It's probably the wording of this text that makes it seem that upgrades are impossible, and I will look at changing this in future. But the suppressor mod really was just a prototype for the future upgrade system we'll see in Afterglow, and I wanted to sneak in a little bonus for people who ask the right questions. It absolutely isn't vital to finishing the final scav run in the tower, and is more of a "secret upgrade".

Spoiler:
Hmm... I can agree with most of these points. It's true the projectiles fired by the raider enemies are quite fast, but they are definitely projectiles, and can be dodged if the player is moving at the time. Bear in mind the individual damage is quite low on the enemy bullets, but is boosted considerably on Survival modes. Survival is meant to be less run and gun and more punishing. But sure, I can change some of the encounters up so there are less instant death areas and more options to use cover and movement. Note that there are going to be a lot more projectile based enemies in the full release, though. And I did want the experience of fighting the mutants to different than facing firearms.

As for the lighting level, yeah, I think there is more room to change the lighting balance. It looks fine to me, but that might be my settings. I'll try to make the contrast a little more and the overall brightness in "safe" areas higher. There will still be some *very* dark areas, but there's a new tool in the full release that will help out here a lot.

@everyone
Speaking of which, I was supposed to be putting out an update on progress, as well as some screenshots. Sadly, a couple of weeks ago my main board on my main rig suffered a full cardiac arrest and left me with very little in the way of modding tools. Although it's up and running again now, I've suffered a pretty hefty delay while I dig everything out and catch up to where I left off. Hopefully this week I should something better to show off, since we've been very busy in the last few months.

Many thanks once again for all the comments and criticism! It's the community input from you all that keeps this project going. Also, if it turns out to be shit, it's entirely all your fault as a result.

Personally I feel the difficulty is good as it is. I didn't really have any insane struggles and had an enjoyable challenge. I really like the everyone dies fast aspect of Survival and I like having lots of people to blast.

Pachira wrote:Personally I feel the difficulty is good as it is. I didn't really have any insane struggles and had an enjoyable challenge. I really like the everyone dies fast aspect of Survival and I like having lots of people to blast.

Same here, Apocalyptic was really cool for me.

Take your time! It's just feels nice and hopeful that the project is still going with big promises. Always thank you for replying us fans and i wish the project itself goes super well 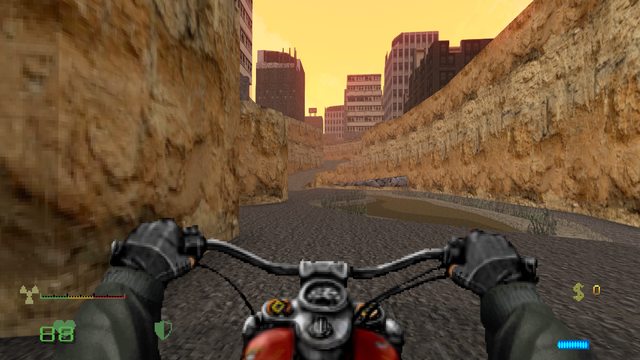 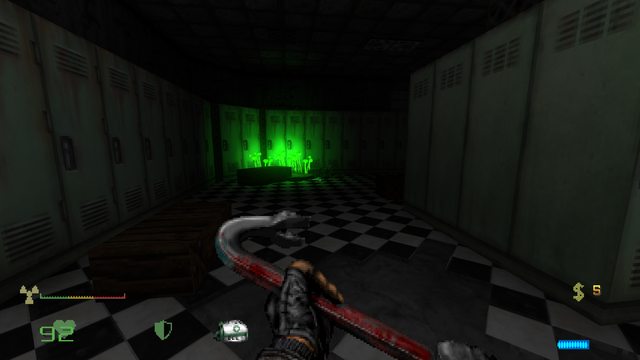 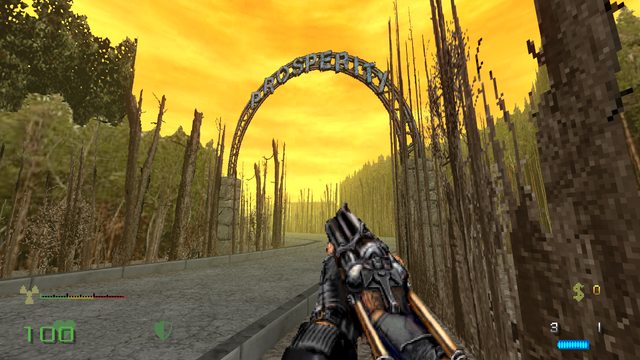 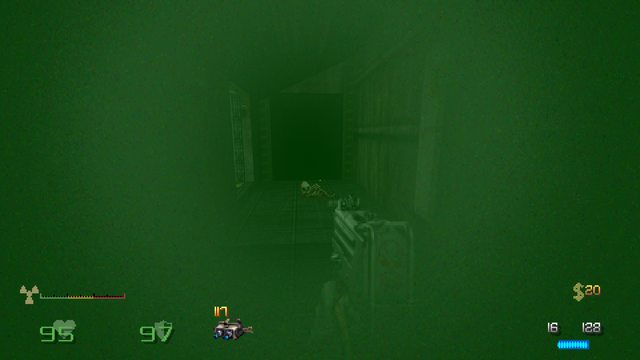 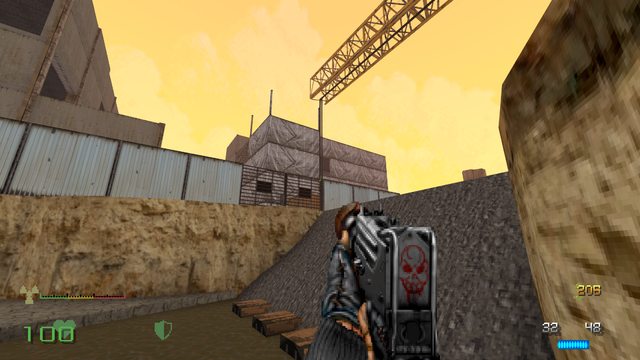 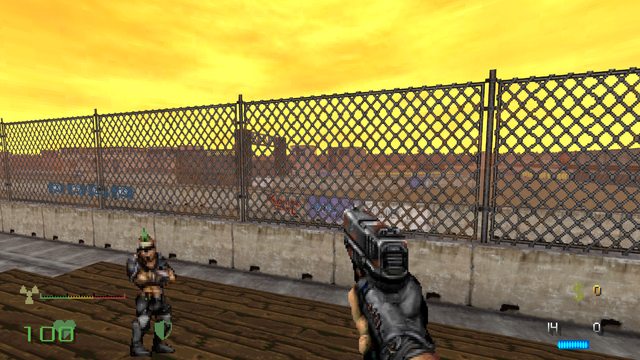 It's that time again!
Having some fun with this hub, making a few more open areas and options for exploration. Don't worry though, plenty of looter-shooting is still to be found.
I'll go into more depth about what you're likely to see and do in the badlands in my next update.
But yeah, current progress -

16 maps in various stages of completion
2 new enemies in place, a third is partially complete, and there's a bunch of old faces who are back into the code but with some new improvements. More to come.
All the weapons in place with full upgrade paths - the two new weapons included.
The motorcycle is back and she is muuuuuuch easier to handle and more fun all around. Working on something else to putter about on, but that's a surprise.
A ton of new music, and it kicks ass.
Updated and improved textures. A lot of them.
Two new items to get your greedy mitts on.

Anyway, we're hoping to wrap up in the not too distant future. We've got a lot done already, but I'm not happy with putting out a date yet. It's not quite where I want it to be... yet.

Amazing work man and I really enjoy the improved level design from the start all is perfect now! Great work!