In Duke Nukem 3D/the Build engine, there is a nifty feature for Multiplayer where the pickup sprite from the currently equipped weapon of other players is shown above their head.

It'd be awesome if this could be added to GZDoom aswell for Deathmatch and Coop, this avoids having to make multiple player sprites or skins for each type of weapon in a mod.

Just a note, this is doable mod-side. Also, if such feature is implemented, wouldn't it give advantage to players who use it? Then everybody will have to use it to be on an equal footing.

The most "fair" way to do it would be to physically spawn the weapon icon into the world as an actual actor (attached to their respective players), this way the game would desync if not everyone has this mod loaded.

Josh771's "Hideous Action Bubbles" does this, actually! It floats your current weapon or selected inventory item in front of your player sprite and adds "sight lines" so you can see what other players are using and where they're aiming. 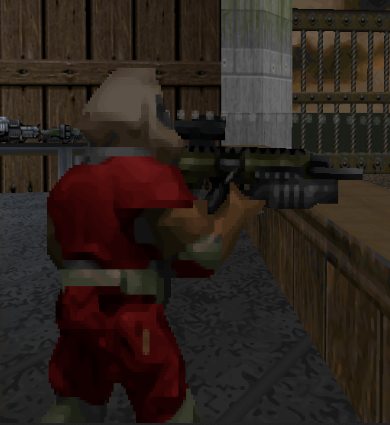 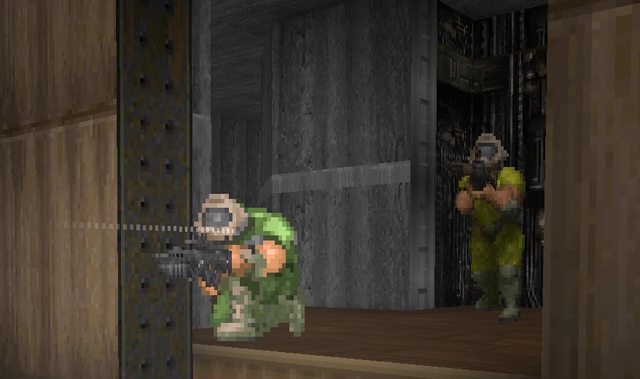 Spoiler: "Videos"
Gameplay, may be a little hard to see

Unfortunately this particular mod was designed specifically for Hideous Destructor's weapons and items, but the concept could be generalized to work elsewhere.

Good question
Now that you mention it, I never played Duke 3D multiplayer (AFAIK EDuke32's main branch's MP has been broken for quite some time due to an unfinished refactoring, but there is an OldMP fork)
So I don't actually know if it's handled client- or serverside.
But yeah, for fairness it should only be settable by the arbitrator.

@Caligari87
Wow, didn't know this existed. Truth be told, I never played HD before, but I'm aware that I'm missing out big time! Indeed, a universal version of that addon would be perfect

m8f wrote:Also, if such feature is implemented, wouldn't it give advantage to players who use it?

From all my experience in Quake3 and CS 1.6, and Im sure this applies to all 'online' shooters in general, it didnt matter what weapon you opponent currently holding.
What really matter is opponent skill.

Yeah, true; normally things would be moving WAY too fast for me to even notice what the weapon the player model is showing LOL.

I remember in UT my main way of recognizing where someone was facing and what weapon they had was from the stream of projectiles coming out of them.

Recognizing weapons felt a lot more useful in Red Eclipse, though, since RE's weapons had reload delays and tended to require more precision which meant less shooting overall - and also weapon limits on top of that, which meant that knowing what weapons someone already had made a much bigger difference since it implied they didn't have something else.

But the biggest difference was always in Killing Floor since (on top of all the stuff about RE) each weapon had such drastically different strengths and weaknesses against the different zed types and pure skill could only make up for so much... and, like HD and unlike RE, you spent a lot more time actually close enough to the other players to see anything.